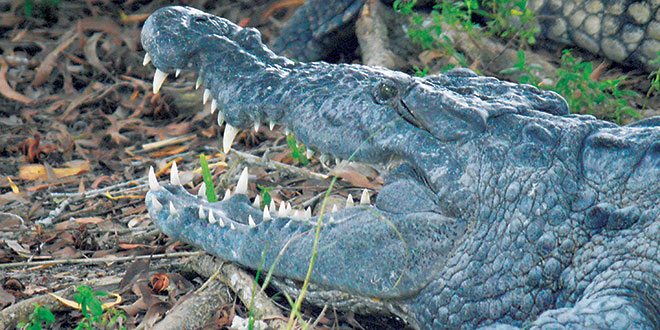 Quite often when I’m talking about dolphins on my tours someone will ask the question regarding alligator sightings. I am always happy to respond that gators primarily stay in fresh water or brackish water habitats, and then I mention that brackish and saltwater areas of South Florida are home to many crocodiles and that this area is one of the few where gators and crocs share the same habitat. Lots of visitors are unaware that we do have crocs here, but it is true.

Found in Central and South America and specific areas of Mexico, the crocodile does call Southern Florida its northernmost home. There is a consistent population here and they can be found from Sanibel Island, along the 10,000 Islands and Florida Bay, and into the northern Florida Keys.

Their primary habitat would be the coves, creeks and ponds of brackish waters in mangrove swamps.

They build their nests in soil that is usually well drained, but close to water. This prevents flooding but still allows for easy access 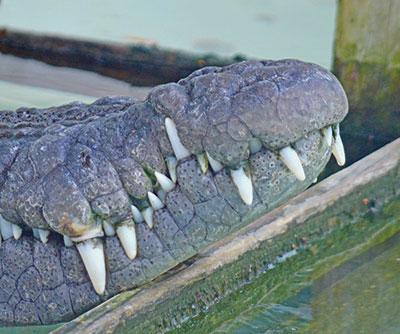 Close-up of croc’s teeth and snout.

to feeding areas. Right around March of each year the female will begin to build her nest, and six to eight weeks later she will lay an average of 40 eggs. These eggs are covered to protect them from predators and the female will return to the nest after a few months to uncover the eggs, assist with the hatching process and carry them to water.

Even though gators and crocs do share similar habitats within brackish water, it is rare to find a gator in saltwater areas. They do not have the gland to secrete salt like a crocodile has. I say this as a matter of fact but I have seen gators, very rarely, in saltwater habitats.

The number of crocodile nests throughout South Florida has increased since the 1970s, but an understanding of their ecology and hope that the Everglades restoration program will continue to retain a proper habitat for them will assure that this rare but beautiful creature will continue to call this area its home.

One response to “Crocodiles in South Florida”