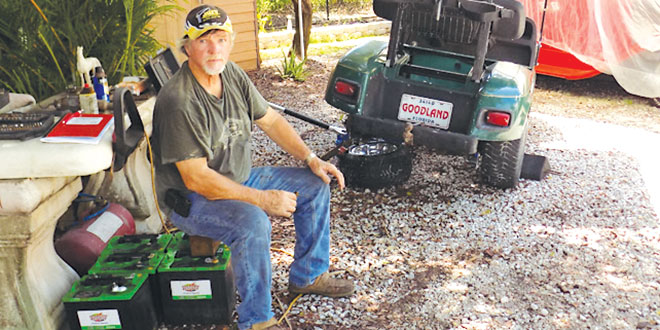 On June 24th, at about 3:00am, three golf carts were stolen from the yards and driveways of sleeping Goodland residents. Two of these were dumped in a canal. The third was recovered damaged but operable. On June 25th at about 1:00am, someone attempted to pry open the cash register at Stan’s Restaurant. The Collier County Sheriff’s Office has open investigations on the above. They have developed a person of interest in the golf cart thefts. Not everyone was sleeping when the golf carts were stolen.

Cindy and John Singerling, 745 Palm Pt. Dr., returned to their residence at about 2:30am on June 24th. They had been on a family visit up north and decided to drive straight through. At about 3:00am, Cindy heard someone traveling on the gravel driveway of Wandel Short, her next door neighbor at 751 Palm Ct. Cindy looked out the window and saw two golf carts proceeding into Short’s driveway. The driveway was well lighted and Cindy could see that there were three white males, sandy brown hair, aged 17 to 24 aboard the two golf carts. When the golf carts entered an unlighted area, Cindy grabbed a flashlight and ran outside. Within seconds three golf carts began exiting Short’s driveway. One of them appeared to be Wandel Short’s. Singerling shined a flashlight on them and they accelerated out Palm Ct. Then, turning toward the Marco River at the foot of her property, Singerling noticed a boat, possibly about 24 feet, with a green light on the bow [possibly the starboard running light], slowly cruising close to shore. She shined a light toward the boat and it 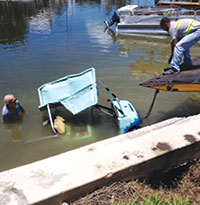 sped off in a westerly direction. Singerling could see the thieves waiting down the street. They quickly split up, with one golf cart heading west on Palm Ave. knocking over garbage cans as it went.

Singerling was just getting warmed up. After notifying Wandel Short and the MCSO, Singerling and Short, drove out looking for the thieves. They didn’t have far to look. They soon spotted the suspects fleeing West on Coconut Ave., two on foot and one on a bicycle. Later, while waiting for the police, Short observed the same 3 kids (sic) run out of West Coconut and get into a white car parked on Stan’s vacant parking lot at the corner of Pear tree and West Goodland Drive. Short had noticed two white cars parked in this area earlier. One of them was possibly a Chrysler 300.

Not done with their nocturnal sleuthing, Singerling and Short later found Short’s golf cart in a Goodland Canal where they had been dumped when it was still dark. They had been drawn to this canal because of the sightings of the suspects here.

When day began to break and the tide had dropped, they returned to this site and spotted two golf carts underwater. One was Short’s and the other was stolen from the driveway of Jim Allen, 320 Pear Tree Ave. Both were pulled out by Bald Eagle Towing. Both were ruined. Even worse news for Wandel Short – The deductible on his homeowner’s policy is equal to the value of the golf cart – around $2500.

The third golf cart which Cindy Singerling had seen turned out to belong to Judy Wittwer, 428 Mango Ave. 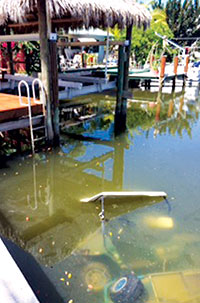 It had been stolen from her front yard and later recovered in front of 621 Palm Ave. E. The cart was banged up, but still serviceable.

Connie Fullmer, 518 Goodland Dr. W. wasn’t sleeping either. She was up late doing some work on her computer. Around 3:00am, she heard a bang and scraping sound in her driveway. Rushing out of the house, she could see a person or persons running away, but couldn’t describe them. Her golf cart had been backed half way out of the driveway with the charger still attached to it.

During the week of June 22, 2015, Goodland has experienced a nasty crime wave which has left the community apprehensive and unsettled. There had been one attempted burglary, three grand thefts (a felony when value of stolen property exceeds $300), one attempted grand theft, and four acts of vandalism.

The MCSO was quick to respond and had an officer out here within 25 minutes of the first reported theft. This was followed later by a number of officers who took statements from the victims.

After the MCSO arrived a number of residents gathered to see what was going on. Comments were overheard (sources unknown) indicating that a local youth was seen leaving Wittwer’s golf cart in front of 621 E. Palm Ave. It was said that another local youth, who had moved over to his mother’s house in Naples, was seen in Goodland at 10:30pm, the night of the thefts. Another resident claimed there had been a recent break in on W. Palm Ave.

The youths or young men who committed the thefts certainly seemed to be intimately familiar with Goodland. Wandel Short’s golf 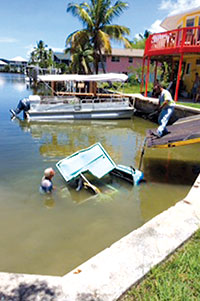 Tow Truck Pulling carts out of the water.

cart was not visible from the road. It was in complete darkness. Yet the thieves went right to it and stole it within a few seconds. They later tarried in Goodland and zipped around like they owned the place.

As of Monday, July 6th, the CCSO can only report that they have developed a person of interest in the golf carts theft and investigations of all incidents are on-going. They say they are following up on potential witness leads.

I learned later, from independent investigation, that the CCSO has interviewed the person seen walking away from Judy Wittwer’s golf cart left at 621 E. Palm Ave. He lives here in Goodland. He was released as so far, no witnesses have been able to place him or anyone else on any of the golf carts. Some youths living on Coconut Ave were also interviewed, but not detained.

This is disappointing to the victim and to the community as the damages here were over $10,000. Everyone thinks they know who the perpetrators are, which makes this even more frustrating for our community.

On a brighter note, I also learned today that the CCSO has identified and is looking to apprehend a suspect in the attempted burglary at Stan’s. The suspect lives in the Golden Gates Estates area and has never lived in Goodland. This is not related to the stolen golf carts. The suspect was identified from surveillance camera images at Stan’s.