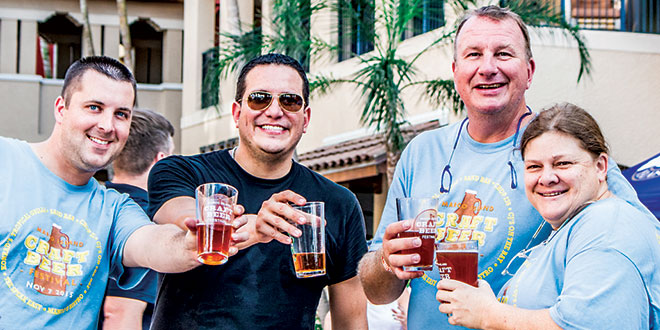 Whew, it was a warm Friday on November 7, but that didn’t stop over 250 people from attending the first ever Marco Island Craft Beer Festival at CJ’s on the Bay at the Esplanade.

Hosted by the Marco Island Chamber of Commerce and chaired by Jacquie Koon, the festival brought local restaurants and local brewers together to showcase the world of craft beers and great food. Each brewer was paired with a restaurant and select food creations that would compliment each of the flavors.

The presentations at each booth were as much fun as the beers and food. Representatives from each of the brewers and eateries were present to answer questions and talk up their products. The entire event was well worth the 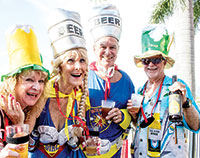 It might be best to offer up a definition of craft beers at this point. While definitions vary, the online consensus is that a craft beer is made by a brewer that is small, independent and traditional. I define it as being the “good stuff.” There are traditional recipes for each type of beer. But the craft brewer likes to put their own twist or addition to a recipe to make it unique.

Karen Minshew is a Naples resident originally from North Carolina. “This event is perfect! As a craft beer drinker, it is great to sample local offerings and experience the full flavor that is missing in so 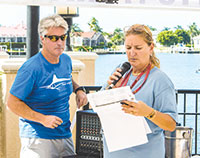 many mainstream beers. I hope they will do more of these types of events. There are some great beers here today.”

Across the country, the craft beer industry is growing rapidly. By my unofficial count, there are over 175 craft brewers in Florida. Each brewer strives to create an original flavor to their beers in each category (lager, IPA, stout, etc.). The innovation shown in the flavors of the beer at the festival were far ranging and I could discern no two beers that tasted the same. That is a heavenly thing to a person that appreciates a good beer. Although the Craft Beer Festival was not a competition, everyone seemed to find a flavor that they favored. However, beer competitions are all the

Tom and Georgann Norton toast the growler they won in the raffle.

rage and a fun event unto themselves.

“Beer drinking is the funnest thing I take seriously,” says Scot Klasen. “One of my favorite things about Marco is that many of the restaurants are dedicating more and more tap lines and cooler space to craft beers. If I can’t get a good IPA or craft lager at a place, I will go elsewhere. Bravo to those who buck the mainstream and say ‘YES’ to quality, independent brewers.”

There was a special VIP section with very special items for those willing to pay the extra. Please don’t tell anyone, but I snuck in and grabbed a couple samples. One was a lavender beer, which was interesting. The other was a peanut butter chocolate beer. I needed a 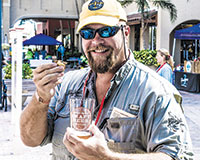 glass of milk after drinking that one. The perfect way to drink dessert.

While this event was the first official Craft Beer Festival hosted by the Chamber, it is my hope and dream that it won’t be the last.

A brewery tour is a fun way to spend a few days. You can visit the tastings rooms of many brewers around the state, which makes a great road trip. Should you want to visit some of the brewers and restaurants that were at the Craft Beer Festival, you can find their names and brews/food in The Starting Line-up graphic with this article. Check them out online for locations and more information.

A special shout-out to all the sponsors that made the Craft Beer Festival a success. Great job and a great concept.