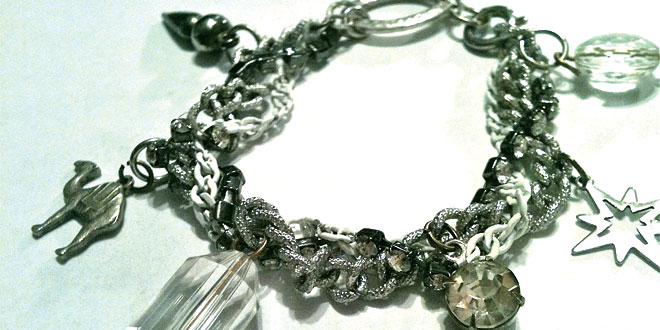 I saw the writing on the wall a couple of years back. The result of the rising costs of precious metals caused many jewelry manufacturers to “re-tool” so to say. When I say re-tool I mean they will have to stop making what used to be great quality gold jewelry and produce it much lighter thus sacrificing the feel and wearability.

That said; in 2005 a man’s solid gold 24”long heavy link chain would cost around $270. Today that exact same chain costs over $1500. Worse than the price is the fact that the new chain won’t be comparable to the beautiful heavy chain purchased in 2005. Some factories have figured out how to make chains cheaper and lighter by making them so hollow even the catch will be so lightweight it will cease to function as a clasp in less than a year.

I encountered a pair of broken gold hoop earrings in my shop that were only recently purchased in the Caribbean islands. When I proceeded to re-solder the detached post it vanished like a snowflake in July.

To my amazement the posts were of a lightweight hollow construction. Just for kicks and laughter I placed the earrings on the gold scale to weigh them. The pair weighed less than ½ gram!!

For those of you clueless on how gold is weighed it is usually by the gram. 31.1 grams = 1 ounce. Most normal earring backs alone weigh more than those new earrings combined. I didn’t have a single earring in my shop that weighed less than a gram and a half. I’m talking one earring here!

The quality (or lack thereof) of these earrings reminded me of the car I saw in Europe manufactured in the Soviet Union during the late 1950s, “the Trabant.” It possessed a smoky, clunky two stroke engine with a sketchy four speed transmission. Best of all the fenders were made of compressed cardboard coated with plastic. It is still considered one of the worse cars ever manufactured. It gets better, to purchase one required being on a ten year waiting list. The only other car choice available was unaffordable to the average Russian.

These have to be the worst earrings ever manufactured.

In all these many years as a goldsmith I rarely said no to a repair challenge. In the past I would let the customer know the odds of success or failure on a seemingly impossible project. I can proudly say most projects that I gave a 20% or less chance of repairing without incident wound up successful. I did these nail biting jobs only at the customer’s risk.

Today I have newly purchased (elsewhere) jewelry coming in broken at alarming amounts. I won’t even write up a job envelope let alone consider fixing it when the odds of success are in the low single digits, and even if by some miracle I can complete the repair, it will not remain that way very long. My advice; return it where purchased, if possible get something better.

I understand more than anyone how the cost of better made jewelry is beyond what most people can afford. In this business I buy gold jewelry on a daily basis. I write checks for thousands of dollars for what used to cost hundreds for the best quality merchandise that most folks in these present times cannot justify buying.

While writing this column in my office I overheard a gentleman lamenting to my sales associate that he would really like to purchase the $2000 diamond eternity ring for their anniversary but was more worried that his wife would chastise him for the expensive purchase, rather than appreciate the well considered gift. He purchased something less expensive. Welcome to my world! Nevertheless, I would rather close up shop before I fill my store with “cracker jack” quality gold jewelry that now seems the norm worldwide.

Top end fine jewelry has always been expensive, especially the jewelry enclosed in a pretty light blue box, from a store whose name begins with a capital “T” and ends with a y.

Substandard jewelry has always been around but even that was repairable. Hand crafted jewelry is rarely hollow and tends to be even overly heavy. That’s one of the fine points of having your jewelry custom made to your specification. Sure it’s expensive, but that piece of jewelry will last longer than the owner will and rarely will need to be repaired. My advice, save your money and invest in better quality jewelry.