CPR Saves a Life at YMCA 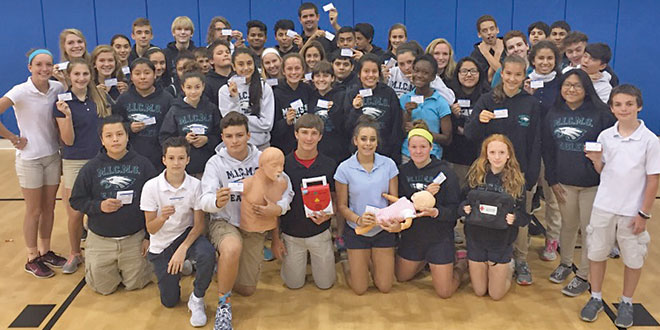 The importance of CPR training was tested at the Greater Marco Family YMCA on Tuesday April 19th.

Personal trainer Kathy Kurtz was training her client Wendy Bullock in the back lobby of the Y. Debbie Hobbs, who happens to be another client of Kathy’s, rushed through the door and said, “I think there’s an emergency out here, there’s a man lying on the tennis courts!”

Kathy and Wendy immediately took off running to the tennis courts, as she quickly told Debbie, “Go tell the front desk!”

The two women saw a man laying on the tennis court, another man standing by him and nudging him, asking, “Are you okay?” There was no response.

Kathy later learned that the man had just finished a game of tennis and all the other players had left the courts. While alone, he had collapsed.

Kathy and Wendy knelt down to the man. Wendy (who used to be a nurse) grabbed his wrist to check for a pulse and Kathy shook him and smacked his cheek a bit, while asking, “Are you ok? Do you hear me?”

There was no response. Kathy grabbed his other wrist to check for pulse and found none. She asked Wendy, “Do you have a pulse?” Wendy said, “No.”

Kathy said, “Ok, I’m doing it,” as she aligned her hands and started chest compressions.

During CPR another woman showed up to assist Kathy and Wendy. She took the man’s wrist, continuously checking for a pulse. Kathy later learned that this woman, like Wendy, also was a nurse. After a few rounds of compressions and breaths, the man gasped and the woman said, “He has a pulse.”

After calling 911, YMCA member services’ Alex Elaty, who works at the front desk, had retrieved the AED, and hurried out to the tennis courts to assist. Alex, along with other YMCA staff, had just received CPR training three days earlier. Alex opened the AED and was setting it up, just as 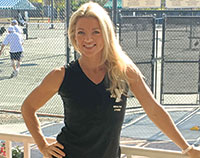 Kathy Kurtz, who performed life-saving CPR, urges everyone to get CPR training.

EMS arrived. CPR was continued until the paramedics arrived on the scene.

Firefighter-Paramedic Chris Bowden was a first responder on the scene. He says that the man was “lifeless, and not in good shape,” when Marco Island Fire Rescue arrived. His complexion was ashy and pale. After the shock from the second defibrillation the color returned to his cheeks, and you could “see his life return.” He said if it was not for the early CPR, and then defibrillation by the paramedics, that the man would not have survived.

Chris said that once the man was in the ambulance he was breathing, and he said to the paramedics, “Thank you!”

After the ambulance left to transport the man to the hospital, Chris came back inside the YMCA, and along with CEO Cindy Love, showed Kathy a copy of the man’s EKG. Chris told her, “Congratulations. You just saved a life.”

The following day happy news from the man’s wife was received. She had called and left a message that her husband was getting a pacemaker, and the doctors expected that he would have a full recovery.

Kathy told us that she has been taking CPR training classes for many years, and always said, “I hope I never have to use it.” She says that she is “grateful that I was there and able to help.”

Chris Bowden reminded us that, “Being prepared in an emergency could save your loved one’s life. Don’t wait to get trained, do it now!”

Chris says, “The three most crucial survival aspects for someone in cardiac arrest is early recognition, quality CPR and early defibrillation.”

The Marco Island Fire Rescue Department offers free CPR training. The next class offered is on May 28. Space is limited and reservations are required. Call 239-389-5040 for more information.