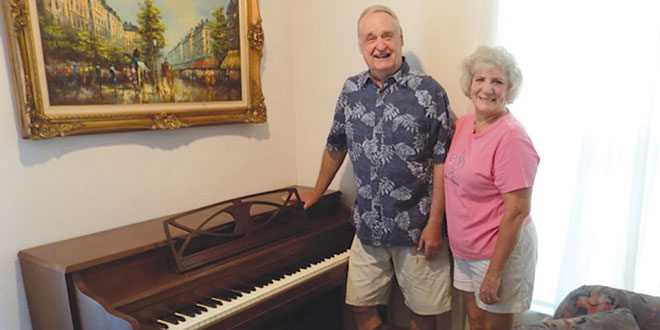 Tom and Kathy Benedik donated this Kohler and Campbell piano to MIA. PHOTO BY BARRY GWINN

Tom Benedik, a retired math teacher, said the piano was only being used occasionally, by his visiting children. “When we read of the need for a piano at MIA [Marco Island Academy], we felt that it was time to put it to better use,” Benedik said. “I was moved by MIA’s appeal for musical instruments which students wanted to play but could not afford to buy.” Lianna Fried, MIA’s new music teacher says that the piano will enable MIA to proceed with an ambitious choral program starting in January.

This semester, Fried is instructing and directing band class at MIA. “We are in dire need for some lower register instruments, like the tuba, tenor sax and euphonium,” says Fried, “I can teach them, but right now neither the school nor the students can afford to buy them. There are students willing to learn. A tuba would be a game changer.” Even without these instruments and a booming base section, Fried was proud of the band’s spirited rendition of the National Anthem at the homecoming football game on October 16. “I received quite a few compliments on the band’s efforts,” Fried said, “It was gratifying for our band members to get out of the classroom and show their stuff.”

Fried has a wish list of instruments needed for the program. If you can help, or if you know of someone else who can, please contact Barry Gwinn at 239-642-7935 or bgwinn@comcast.net.