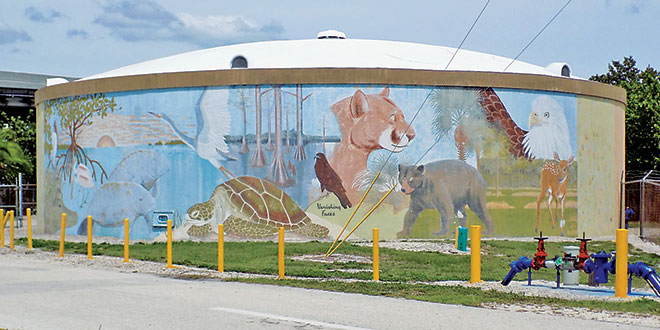 The Goodland Water Tank, built in the 1970s to service Moran’s Marina at the foot of the Goodland Bridge.

Following the Easter holidays next spring (Easter Sunday is April 16) Collier County will begin replacing the 35-year-old main waterline into Goodland. Prior to 1981, Goodland depended solely on water collected in cisterns, or from artesian wells. Many visitors brought their own supplies of water, cistern water being unpalatable to many. In the late 1970s the Marco waterworks ran a line down San Marco Road to a recently built water tank, servicing Moran’s Marina at the west end of the Goodland Bridge. By 1980, Allen Greer, the owner of Drop Anchor Trailer Park and an early mover and shaker in Goodland, prevailed upon Collier County to extend this line into Goodland. As a result of his importunities, The Goodland Water District (GWD) was established and, in 1981, the line was extended into Goodland. From that time, the GWD would be buying its water from Marco Island. It was (and remains) too costly for the county to build a water line from one of its mainland water works. The GWD serviced residences and merchants in Goodland and Key Marco. This arrangement was largely satisfactory; the water tasted OK, there were few interruptions, and the rates held fairly steady. Then in the spring of 2011, the county dropped a bombshell. 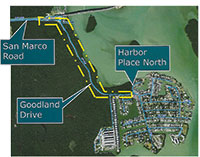 County Utilities, was invited to address a Goodland town meeting. What he said was unsettling. He told us that the only feasible source of water for the GWD was Marco Island, which had recently increased its bulk rate by 38%. To pay for this, the GWD would have to raise rates to their customers by at least 30%. “That is not the worst of it,” said Wides, “The [1981] main water line is wearing out and needs to be replaced [at an approximate cost of $500K].” The 330 GWD account holders had to pay for this themselves, requiring an additional huge rate hike. “As things stand, no other county water waterworks is interested in sharing the costs,” Wides told us, “Goodland is simply too remote and too costly to service.” Thoroughly alarmed, the GCA increased the frequency and tempo of its meetings with Commissioner Donna Fiala and county staff, pushing for inclusion of the GWD in the county system. Fiala, who has a well-known soft spot for Goodland, was particularly receptive and was a frequent visitor to Goodland town meeting, during this period. Fiala’s reports were encouraging, and in November 2012, an ordinance was passed which seemed to satisfy everyone. The ordinance, passed in November 2012, dissolved the Goodland Water District and folded it into the county system. 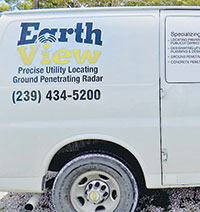 Now the county would put its full resources toward administrating and maintaining the Goodland water delivery system. The relief was instantaneous. Goodland water rates fell by 30 to 40%. An additional levy of some 35% to pay for the overdue replacement of the system would not be necessary, as now, the county would pay for this. Freed from sky high water rates, the Goodland merchants were able to make use the money saved for needed improvements to their businesses.

During the ensuing 4 years, rusting valves caused periodic leaks, necessitating expensive repairs and occasional interruptions of service. After testing along the line, the county determined that replacement of the line could be put off no longer. On June 14, the commissioners accepted a bid of $612,305 for replacement of the main water line into Goodland. Grady Minor, of Ft. Myers will be doing the heavy lifting. An informational meeting was held at the Marco Library on August 17. At the meeting, it was announced that the construction would begin in October and be completed by March 2017. Damas and Patty Kirk, owners of the Kirk Fish Market, were dumbfounded. “[At an earlier informational meeting in January], they told us that the construction would be from June to October,” Patty said, “We told them we had no objection to that.”

The Kirks heard nothing more about this until August 8, when, by happenstance, they retrieved a notice from their fish market front door announcing the August 17 meeting and new construction dates, beginning in October. “Damas and I were incensed,” said Patty, “We felt that these guys had no clue as to what they were getting into. Combined with the high tides and flooding, the one-lane closures (which hadn’t been mentioned in January) and the heavy seasonal traffic, the road was likely to turn into a muddy salty mess. Anyone in his right mind wouldn’t drive through this and would be unlikely to return to Goodland while this was going on.” The Kirks, along with other restaurant owners, arrived at the meeting loaded for bear. “You have no idea what you’re getting into,” Damas told the assembled contractors and county staff, “You can’t do this at this time of year. How would you like to rip up 2/3 of your paycheck? That’s what will be happening to us.” At some point, one of the men on the dais told Damas that, “an agenda is an agenda.” “We took that to mean that it was too late to do anything about the schedule,” said Patty, “We left more upset than when we came in.” County project manager, Oscar Martinez,

closed the meeting, remarking that the county had no idea that it would have such a negative impact on the Goodland residences and businesses. “We are here to listen,” he said, “and we will take your concerns back to the table.”

At 8:30 AM the next morning, Patty Kirk called Commissioner Fiala on her cell phone. Fiala, vacationing in Ohio Amish country, picked right up. She said she was on her way to an Amish wedding, but after hearing, what Kirk had to say, said she would get right on it. “This can’t happen,” Kirk told her, “but we have no problem if it starts in April.” “I could tell that Patty was upset and agitated by this,” Fiala said, “It was obvious that doing this work during season might affect her seafood business tremendously, as she delivers to so many restaurants in the area. I knew that the other restaurants were just as concerned.” An hour later, Patty’s phone rang. It was Martinez, telling her that the project would be postponed until mid-April.

Next edition – Just what is in store for Goodland?