On Feb. 7, Collier County and the Florida Department of Transportation broke ground on a project nearly 20 years in the making — the U.S. 41 and S.R./C.R. 951 Intersection Capacity Improvement Project. The two-year project is being completed in conjunction with the resurfacing of 951 from south of Fiddler’s Creek Parkway to south of 41.

According to Connie Deane, Collier County’s community liaison, the projects are part of a Joint Participation Agreement with FDOT, which will be reimbursing Collier County for approximately $14 million of the approximately $20 million in construction costs. The combined contract was awarded to Community Asphalt by the Collier Board of County Commissioners on Oct. 8, 2013.

The goal of the project: To reduce congestion, improve safety and improve emergency evacuation. This will be achieved by adding capacity improvements, such as additional turn lanes, and by realigning the intersection. In addition, bike lanes, a sidewalk and a 10-foot shared-use pathway on the east side of Collier Boulevard are part of this project, as well as enhancements to Collier Area Transit bus stops both on north and southbound Collier Boulevard at Triangle Boulevard and eastbound and westbound on 41. 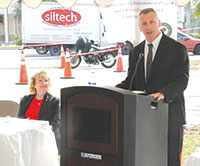 The need for such improvements was identified as far back as November 1995 in the Collier Metropolitan Planning Organization’s “Collier County 2020 Needs Assessment.” The reasons are two-fold. First, 41 and 951 is a major signalized intersection and a primary access point for traffic. Second, 951 is an important corridor in the Collier County Emergency Management Department’s evacuation network, providing access to northbound evacuation routes along 951 for Gulf Coast residents in Marco Island, Goodland, Isles of Capri and East Naples.

To bring the projects to fruition, Collier County worked in coordination with FDOT and the Federal Highway Administration during the multi-phase planning, design and public involvement process. Public meetings were held over a two-year period (2010-2012) where staff and consultants reviewed the various alternatives. The public meetings were crucial to the success of this project due to concerns from residents about environmental

In addition for the 951 Resurfacing, Restoration and Rehabilitation Project, a public design review and informational meeting was held to allow the public to review the plans and provide comments when the design was 60 percent complete. Plus, staff and consultants met with homeowners associations and community groups to review the plans for the projects and provide responses to any questions during this same two-year period.

To help assuage public concerns, the county requires that during peak travel times — morning rush hours and late afternoon/evening rush hours — as many travel lanes as possible remain open and usable. The county distributes a Road Alert report each week, usually on Thursday afternoons, with information regarding where planned lane closures and other road construction items are scheduled in order to advise the traveling public. The reports can be found on the county’s website at www.colliergov.net/index.aspx?page=18, or by signing up for electronic notices at www.colliergov.net/index.aspx?page=15.

For more information, contact Pam Bastien at 239-252-8192 or pamelabastien@colliergov.net.