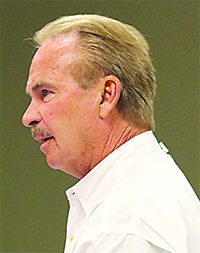 At their last city council meeting members heard Public Works Director Tim Pinter speak to his plans to continue with the Annual Street and Roadway Repaving Program, which Pinter had budgeted just over $600,000. That program in 2017 would be able to pave approximately five miles of roadway in the area west of Collier Boulevard and off North Barfield Drive.

There are approximately 120 miles of paved roads on the island. 57 miles of those same roads were repaved during the infamous STRP (Septic Tank Replacement Program), while other areas such as the repaving of Collier Boulevard, Bald Eagle and sections of San Marco Road have been done. This would leave approximately 29 miles of additional roads left to be paved.

When former City Manager Roger Hernstadt brought his first budget forward in 2014 he devised a “bucket plan” which would fund ongoing capital projects such as the repaving of roads. 2015 and 2016 began the first of those applications of funding for a regular repaving of city streets. The 2017 budget included monies for the third year of that program, and would have involved the repaving of streets in one of the earliest developed areas of the island, which encompasses 4.2 miles and would have cost in the area of $665,000 this year.

Council however would balk at following Pinter’s recommendation due to so many complaints from residents about roadways that were redone in the former STRP Districts and other poor thoroughfares and feeder roads around the island.

Pinter did bring forward an alternate plan which would have involved repaving Kendall, Tigertail Court and some of San Marco Road to deal with those troubling thoroughfares.

Councilor Roman considered the roadways on the island to be the number one issue regarding quality of life on the island. “It’s important to me how we balance the repair of our failing roadways versus the resurfacing program you have,” said Roman. “Would it be different if you went out and prioritized the worst roads on our island?” inquired Roman.

“I question whether we are getting the best bang for our buck from our contractors. I want to know how we can insure we’ll be getting better results,” said Councilor Rios.

Council requested a more robust set of statistics regarding roadways, their usage and condition so they could make a more reasoned approach regarding funding for roadway repairs.

“I don’t have a lot of confidence in the engineering that brought us these roadways,” said Council Chairman Larry Honig.

Pinter stated that the roads did not have adequate time to settle or compact after construction. “The problem was the poor compaction and materials used to do the project,” said Pinter.

Some councilors and citizens have wondered aloud regarding the oversight by the city of these projects going back over a decade ago.

Pinter was requested to return to council with a more detailed analysis of the condition of the roadways and other information at a future meeting.