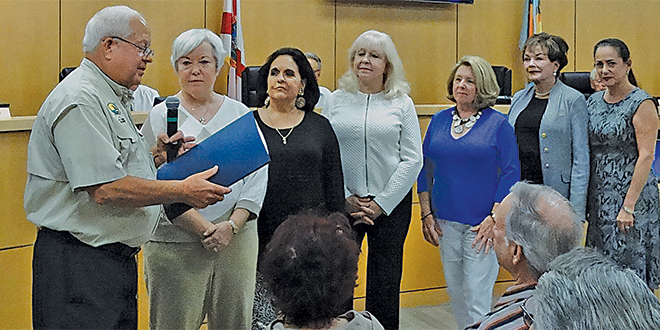 The second meeting for October of the Marco Island City Council had a relatively light agenda and dealt more with recognizing individuals and groups that have contributed to the community over the years, after council listened intently to Coastal Zone Manager Gary McAlpin brief councilors on the details surrounding an impending beach re-nourishment.

Council presented a proclamation to the Marco Island Woman’s Club in recognition of their 50th year since their founding in 1966. Council Chairman Bob Brown read the proclamation, which recognized their contribution to the community.

Battalion Chief Tom Bogan, who this year has begun his 26th year of service to the Marco Island Fire Rescue Department. Deputy Chief David Batiato read the proclamation honoring Bogan for his service and leadership within the department, as members of the department looked on.

As this would be his last meeting as a councilor, the board recognized the contributions of Councilman Larry Sacher, and thanked him for his service. Sacher, in turn, praised the professionalism of the city staff for its hard work, and spoke of his admiration and respect for Roger Hernstadt, the city manager. “You have 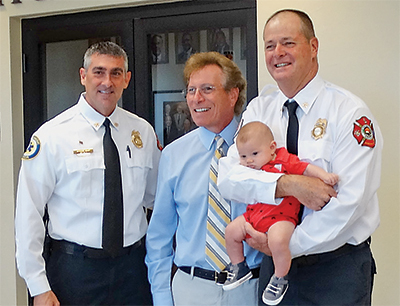 done an excellent job and it has been a delight to work with you all,” said Sacher.

Council moved on to dispense of some standard housekeeping items before voting 7-0 to extend the contract for services by two years for Mr. Ron Book. Mr. Book has acted as our lobbying agent in Tallahassee to obtain state grants the last two years, resulting in considerable windfalls for the city.

They would also vote 7-0 to refinance certain utility system bonds as proposed by the city manager, resulting in approximately $900,000 in interest savings per year and $5 million over the remaining life of those bonds.