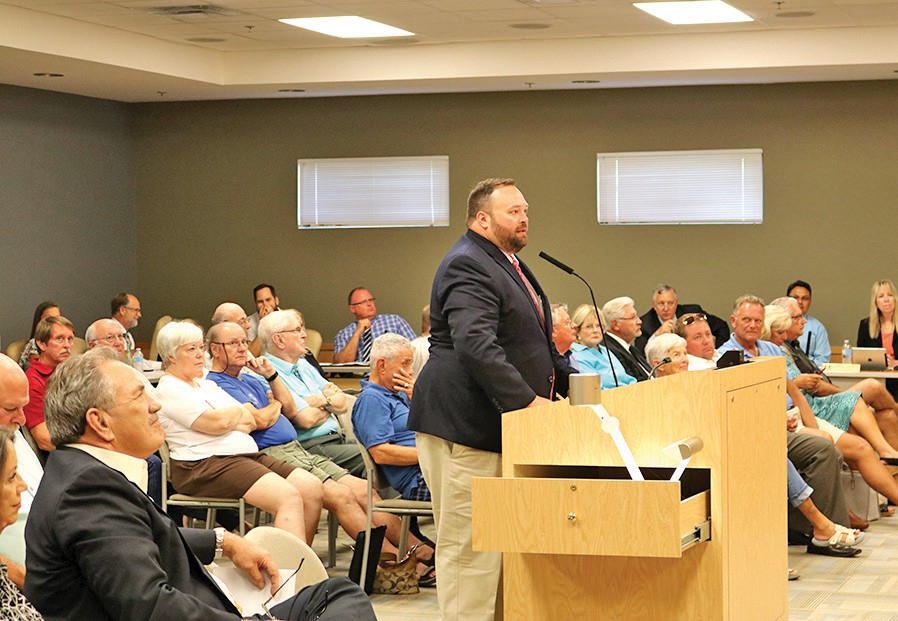 Joshua Gruber thanks council for the opportunity to interview for the city manager position. Photo by Steve Stefanides

Marco Island City Council on Monday evening, June 17, held a marathon session which saw a number of items postponed while others dominated their discussions until 11 PM before adjourning for the evening.

The evening’s discussions included an introduction of Joshua Gruber. Gruber is the only candidate for the vacant position of city manager and is in town for interviews with councilors and a meet and greet for the community on Tuesday evening.

Councilman Victor Rios would again bring forward an issue regarding erosion at the South Beach area in the area near the Cape Marco development.

Gary McAlpin, Director of Collier County Coastal Zone Management Program would appear before council to address the issue and explain the process the county employs as they seek to determine an “emergency” in regards to the need to take immediate action. He explained that the “threat to upland structures” was the determining factor in his department’s view of declaring an emergency and taking immediate action.

He would also go on to explain that nourishment in that area being discussed was in the planning stages for 2019, but that the area was being monitored for any further deterioration.

Councilor Rios would press the issue with his fellow councilors regarding the need for another study as to the causes of the issues due to the age of the original study which is the basis for the county’s present action plans.

The city would send along a letter to the CAC and McAlpin that would request:

• The county re-nourish the area immediately after November 1, 2017 and complete that project by January 1, 2018.

• Establish quarterly monitoring of the area to provide for a benchmark for future actions.

• Keep the FY 2019 plans for the renourishment project on the CAC schedule should the emergency action not be sufficient to mitigate the issues.

• Request funding for a study that would look at the possibility of additional structures such as groins and breakwaters. Nautical Garage Approved on First Reading

Council would also engage in a lengthy discussion regarding an ordinance on first reading which would allow the construction of a nautical garage as part of the Land Development Code as a Conditional Use. The Planning Board had previously reviewed this item on two separate occasions and council would finally approve the request on its first reading of the ordinance after considerable debate and a 6-1 vote in favor, with Councilman Bob Brown dissenting. Setting Initial City Tax Rate 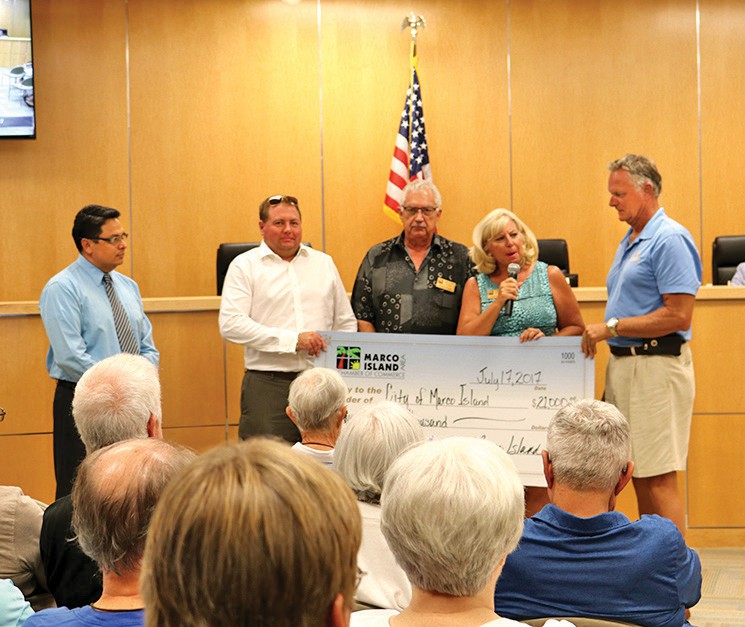 At the council meeting, the Marco Island Chamber of Commerce presented the city with a check for $21,000 for the July 4th fireworks presentation. Photo by Steve Stefanides

city. They will be required by that same state requirement to set the final rate in September, but that number cannot be above the initial rate, but can reflect a lower number when a final budget is passed in September.

Council will be meeting over the next two and a half months to continue to carve out the spending plans for the 2017-18 fiscal year. Previous councils have always erred on the side of caution and provided a number to the state which has given them some flexibility in making those final decisions regarding city services.

Initially Councilman Bob Brown attempted to set the initial rate at $2.0109 which would have reflected the roleback rate plus the add-ons which had been requested as part of the manager’s budget, but did not get the support for that.

Councilman Howard Reed suggested that a $1.9966 rate would be appropriate and would reflect his desires to see us begin to address the need to begin the program of repaving the roadways around the island. “Our assumption that people want us to give them the lowest rate is false. They want us to spend their money in a responsible manner,” said Reed. His appeal gained traction initially and councilors voted 4-3 in favor of that number.

Chairman Honig however would move to amend that rate and lower it to $1.8976 and his motion would carry and that rate would be reported to the State of Florida. That number may be lowered in September, but in no case may the rate now be raised. Council will meet over the next two months to decide on the budget itself and make the decisions on spending and service levels. Search Process Questioned

The search process and its results giving the community but one choice to fill the vacant position of city manager was discussed at length. Councilmen Brown and Batte both voiced their displeasure with the results, but it was Councilor Roman who was most passionate in her displeasure regarding the process which resulted in only one choice and no contingency to deal with that.

“The citizens have asked us to slow down and do it right this time,” said Roman. “If we do nothing to correct this flaw in the process and the lone candidate is again hired that would be a disservice to our community and could impinge on our integrity as a council and the integrity of the process and a disservice to the candidate. Our administration will have a stigma from this day forward. Perception can be as impactful as reality itself.”

The city attorney would advise council that it could continue the process and move forward to interview Mr. Gruber on Tuesday and Wednesday, and at the Wednesday evening meeting choose to either proceed to hire him or chose to take no action and continue the search for other suitable candidates.