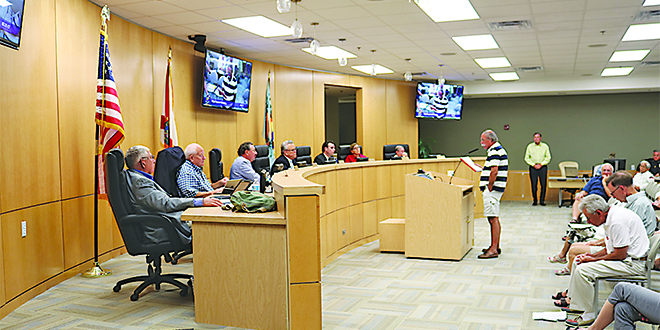 When Marco Island City Council convenes on Monday, March 6 at 5:30 PM in chambers, many are hopeful that they might finally be able to move forward and avoid the minefields of more contentious issues.

At their last meeting, council broke with the long held tradition of respecting a councilor’s nomination to an advisory board when Vice Chair Jared Grifoni engineered the defeat of Councilman Bob Brown’s nomination to the Beach Advisory Committee. Gene Burson, an avid volunteer on the island and former Beach Advisory Committee member was defeated when Grifoni questioned his political stances since the end of the last election and his continued call for residents to stay engaged.

Vice Chair Grifoni referred to a letter to the editor in which Burson speaks his mind. “I’m concerned whether this person can be trusted by council as a whole and not individually, to provide unbiased and the best information concerning the Beach Advisory Committee.”

“First and foremost, individuals still do have freedom of speech in this country and on Marco Island,” said Councilor Brown. “Anytime when a seated city council asked for an appointment to a committee we’ve never seen a nomination torpedoed,” said Brown.

“When we ask people to sit on committee we don’t ask them to give up their rights. We don’t tell them they can’t have a political opinion. All we tell them is to please help us to do a good job for the citizens. You ought to respect your colleague better than your doing,” said Councilor Batte.

“My concern is in whether this person can set politics aside and advise us in the best interest of the city,” said Grifoni, as he defended his attack on the Burson nomination.

“Stirring up the pot is distinctly unhelpful,” said Council Chair Honig in reference to the letter to the editor which was attributed to Mr. Burson.

A number of persons came forward to speak to the qualities of Mr. Burson, but to no avail as the vote to reject his nomination was 5-2 with only Councilors Brown and Batte voting for Mr. Burson.

Separation Agreement Fails
The formalized separation agreement between former City Manager Roger Hernstadt and the council failed to secure the requisite majority vote from council. The agreement was formalized by the City Attorney Alan Gabriel and with input from Councilmen Reed and Grifoni. Only Councilors Brown and Reed voted to accept the agreement and move on.

Hernstadt resigned effective July 7, 2017 in a letter transmitted to the council on February 6. Council did accept his resignation and opted to have it be effective immediately. Those terms included paying him his salary until the July 7 date, in addition to all his benefits and leave. Hernstadt had also requested that his health insurance be continued until December 31, 2017 and permission to retain his iPad.

The agreement as brought back and signed by Hernstadt at the February 21 meeting had been negotiated down to an amount totaling $115,946.57 by City Attorney Alan Gabriel. It was that motion by Councilman Brown that failed to approve the agreement.

During their subsequent discussions at that meeting after rejecting that document some councilors seemed to indicate they were not far away from an agreement, however Councilor Grifoni indicated he had “significant problems with the agreement,” but didn’t speak to any specifics. Councilor Roman did raise a number of issues regarding the Separation Agreement, as did Councilor Rios.

Selecting an Executive Search Firm
Staff has provided the outline for a RFP (Request for Proposal) to obtain a firm to vet and bring forward candidates for review. Staff provided no less than an initial listing of 36 such firms and several councilors requested that the process be opened up to local advertising, email solicitations and in-house searches.

Should the timeline be followed that council is suggesting that timeline indicate a possible June 1 start date for a new candidate to be in place.

Councilor Reed spoke to his desire to see preference given to search firms that are within the State of Florida as well as possible candidates.

Discussions With County
The creation of a letter to go to the county requesting a meeting for resolution of the Goodland Road issue, as well as how to move forward on other issues created some additional discussion regarding its content, its creation and how to move forward.

Chairman Honig admitted he had somewhat changed the verbiage of the initial letter, but was bringing it forward for councilors to review.

Councilor Batte reminded his counterparts that the last time they went to meet with the commissioners they showed little interest in discussing more than just the issue concerning Goodland Road. “This is too big an issue to confuse it with others,” said Batte.

Councilor Reed also referred to the fact that at their last meeting they made a choice of the version “B” letter and now they had a version “C” letter which was never discussed. “If I got this letter I wouldn’t want to meet with you, you’ve told me your opinion and slapped me in the face. I also didn’t believe that we’ve agreed to remit the monies we are holding, don’t we have to vote on this,” said Reed.

Reed did agree with Honig that he would prefer to have as many councilors present for the meeting.

“This is a different county commission than we met with last time,” said Councilor Rios. He did have some other suggestions for removal of confrontational verbiage.

Vice Chair Grifoni also favored bringing more issues to the table than just the Goodland Road issue. “We need to have the conversations on these issues,” said Grifoni.

“This is our one chance to make a positive impression on the County,” said Councilor Roman. “I would hate to see us make a misstep. We need to restore positive relationships with the County.”

Council Chair Honig wondered out loud whether they were ready to meet with their counterparts and would suggest that the chair would bring back an amended version of the letter.

Theresa Morgan from Goodland appeared during the public comment section and pleaded with councilors; the Goodland Road issue should not be held as a bargaining chip. “This is a matter of public safety,” said Morgan. “We keep talking about it. You have a letter that you agreed to at your last meeting. We are getting tired of the delays,” said Morgan.

Thirty-four minutes after the start of the discussions as to what letter would be sent, council would defer action due to a lack of a second on a motion by Councilman Brown to proceed with their original version “B” of the letter and await an amended version of the communication be created by Chairman Honig.

Mixed Use Building Approved
A 22,000 square foot mixed use building was approved at 928 Park Avenue. That building would have retail/office space on the bottom level and three stories above of residential dwellings. This is located directly across from Veterans Community Park.

March Meeting
A number of items were deferred to the March meeting of the council to be held on March 6, that will convene at 5:30 PM in Council Chambers at 51 Bald Eagle Drive.