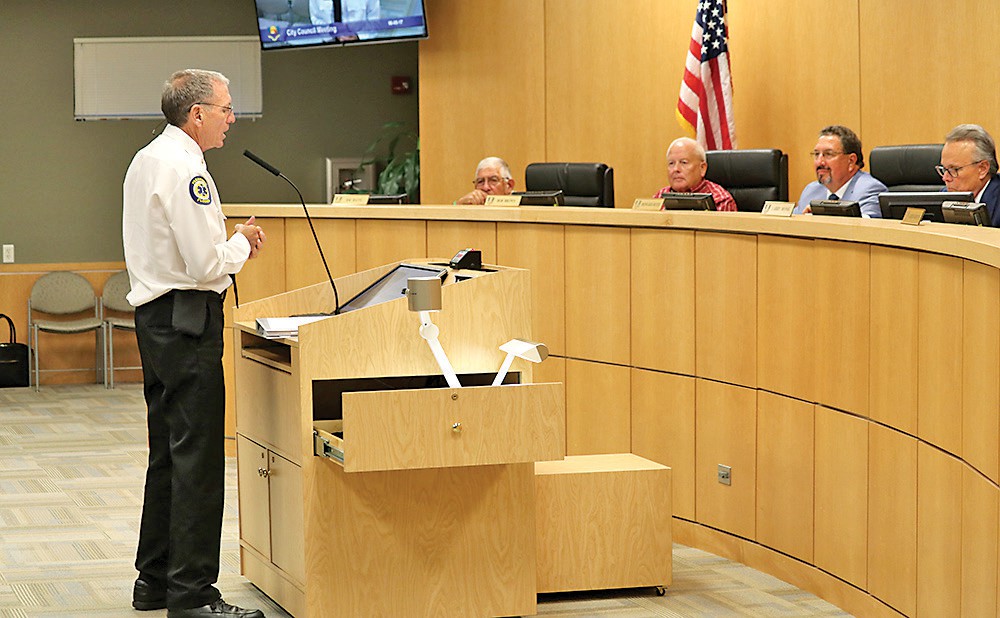 The much debated and often discussed issue concerning whether the city should move forward in regards to obtaining its own COPCN (Certificate of Public Convenience and Need) to establish its own emergency medical transport service inched closer towards making a formal request to Collier County.

The State of Florida actually issues those certificates, but the city would have to first prove its case to the Collier County Emergency Medical Authority, a board that would recommend to the Collier County Board of Commissioners whether or not that application should be supported. Only then would the commissioners make a decision as to whether or not the city’s application should be approved and sent along to the State of Florida for granting of the COPCN.

On Monday evening council moved forward to approve a three-pronged approach to the issue by first directing the city staff to work with the consultant to complete the COPCN application and provide appropriate back up material and data to be reviewed for council for a final decision.

The second of the three avenues would be to have staff work on a proposal to make the case to the county for the placement of a second full-time ambulance on the island. Presently the county provides a second unit to the island during the season on a parttime basis.

The third prong of the approach would be to work with the city’s lobbyist to build a coalition to overturn the Florida State law, which requires communities to seek approval from their counties to seek that COPCN licensing and create a strategy to accomplish that goal.

If in their opinion, the city reaches an accommodation in regards to improving services to island residents, the city could choose to suspend the COPCN request.

“We have the solid data available to us for taking this process forward,” said Councilor Bob Brown.

It was Councilor Jared Grifoni’s desire to move beyond the application process and negotiating for a second ambulance and seek to overturn the state law outlining the process which municipalities now must follow.

When Councilor Howard Reed attempted to amend the motion to accept the threepronged strategy and remove the portion regarding overturning the state law, Grifoni refused to amend his motion. Reed feared offending those on the county level that they would have to negotiate with on this issue and others.

It was Council Chairman Larry Honig who would make the point that council was not being aggressive enough in their approach and would support Grifoni’s motion.

In the end council would vote 6-1 in favor of the three-pronged approach, with Councilor Charlette Roman objecting due to a lack of data to support the city’s position. Petricca Passes on Utility Advisory Board

Former Councilman Amadeo Petricca passed on being appointed to the Ad-Hoc Utility Advisory Board and chose to stay in his position on the Ad-Hoc Parking Solutions Board. He had been strongly supported for that position by Chairman Honig but a debate ensued as to whether he should sit on two committees. Not wishing to relinquish his seat on the parking committee, Petricca chose to pass on the appointment. Goodland Road Update

Chairman Honig reported to the board that the county was prepared to move forward to amend the Inter-Local agreement between the city and themselves to return Goodland Road (92A) back to the county. The city in turn would forfeit $2 million owed to it, plus provide $1.5 million it is holding in collected impact fees to the county.

The county is estimating that it will proceed with construction in 2019 at a tentative budget of $5.2 million. City Manager Search

The board learned that the consultant has received 30 applications for the position of city manager. Of those, 14 appear to fall short of the qualifications necessary to be considered. The closing date for applications is June 16th. Streetlights For Bald Eagle Postponed

An attempt by Councilor Joe Batte to have streetlights installed on Bald Eagle Drive between Collier Boulevard and San Marco Road was delayed and would be discussed during the normal budget cycle. Veterans Community Park and Density Credits

Council moved to have the city attorney draft ordinances rezoning Veterans Community Park a park and removing its designation as a PUD. They also directed the attorney to draft legislation to remove the practice of transferring density credits. Honig on Pensions

In an attempt to dispel rumors that the council was considering the abolishment of police pensions and moving to a 401K system Council Chairman Honig responded; “No one on this board is advocating that be done, there is no truth to that,” said Honig. Budget Workshop

Council will meet in a budget workshop session on Thursday, June 15th at 5:30 PM in chambers to continue deliberations on the 2017-18 budget. The public is invited to attend and participate.