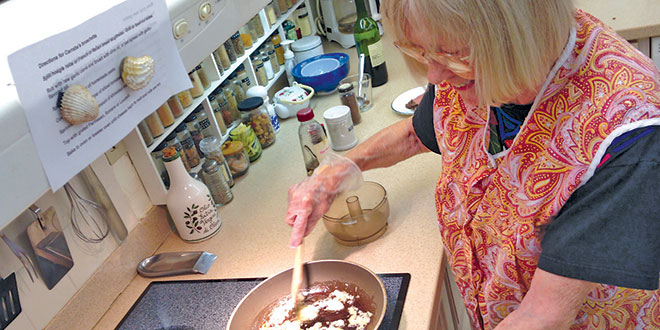 Marion stirs the onions on her specially made stove. PHOTOS BY SAMANTHA HUSTED

Marion Nicolay has been living on Marco Island for the past twenty-seven years. She used to write a cooking column for another local newspaper titled, “Cuisine.” Recently, Marion took me into her kitchen and taught me how to make her simplified version of Beef Miroton, which is basically a red wine sauce over roast beef.

Marion’s home is warm and inviting. Her walls are decorated with her artwork (she used to be an art teacher) and old family memorabilia. As she led me towards the kitchen I could hear the faint sounds of jazz music playing in the background. Much like the rest of her house, her kitchen is large and sprawled out and neat. It overlooks her backyard and the canal beyond that.

Marion is legally blind. Her kitchen is idiosyncratic and situated in such a way that she can move around using her hands and her memory alone. Everything has its place. Even the spices are arranged and labeled with large font so that Marion can decipher between them. This is without a doubt her kitchen.

We donned aprons that snapped in the front and gloves. Marion believes that the two best tools to use in cooking are your hands and I agree. That’s how Marion navigates her kitchen, and her world really. She feels for the things she needs in the places she knows they are.

We started with the beef. Before we met, Marion 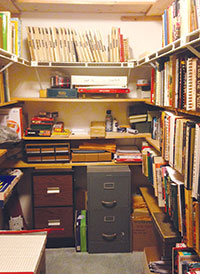 Marion has a walk-in closest in the back of her home that is dedicated to cooking books. It’s almost like her own miniaturelibrary or reference room.

had instructed me go to the Publix deli and ask for a piece of roast beef about 1/4 of an inch thick. To begin she had me cut the meat length-wise to make it a little thinner, while she chopped the mushrooms.

The nice thing about Beef Miroton is that it’s easy. It’s elegant and fancy, yet simple and unassuming. It’s a dish that’s usually made with leftovers and the whole process takes about 20 to 30 minutes. It also pairs really well with champagne. But then again, champagne seems to go well with everything. “Champagne is universal,” said Marion. “It can go before dinner, it goes with soup, with salad, with the main dish. Any main dish, champagne doesn’t care. You can have champagne any time you like.”

Next Marion took out her vegetable chopper, one that she’s had since the 1950s. The chopper’s name is “Little Oscar,” and she uses it to mince onions and other vegetables. This recipe calls for one medium onion minced, which can be chopped manually as well. “I’ve probably got one of every appliances that has ever been made to use in the kitchen,” Marion said with a laugh. After the onion had been minced, Marion placed two tablespoons of butter to a skillet with a little bit of canola oil over medium heat.

Marion’s stove is another point of interest. It isn’t what you’d call a traditional. It looks like a 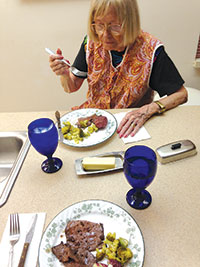 When it was all said and done Marion and I sat down and enjoyed the meal.

thin slab of black marble that just sits right on the countertop. It has no back to it and the knobs are in the front so Marion doesn’t have to reach over hot burners in order to change the temperature.

Next we added the minced onions to the skillet, allowing them to soften and become translucent, but not brown. Then we added the chopped mushrooms and the beef stock. Slowly Marion added sifted flour to thicken it up. This is the part where you just sort of have to eye it.

Marion makes homemade vinegars. Her bottles even have their own labels that she created. For the recipe we added about four ounces of her red wine vinegar. Then we added the beef and let it sit to warm it up. And that’s it. We ate it with steamed broccoli and potatoes.

It’s interesting that the food we eat and how we eat it is constantly evolving. Trends come and go, new technologies arise, but I think the art or the essence of cooking remains. Marion grew up in a time when girls were expected to take home economics and boys woodshop. She says that when she was younger things like coconut oil were considered unhealthy yet today it’s a staple for clean eating. Ideas surrounding what or who should be in the kitchen have changed and Marion has been witness to it. She learned to cook in a 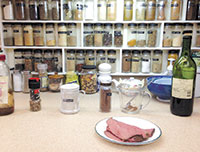 Almost everything in Marion’s kitchen is labeled in large font, which makes it easierfor her.

different world than the world I’m learning in, yet her advice is loving and kind. She understands the changes and willingly embraces a 22-year-old novice.

The meal we cooked was ageless. You could have eaten it 200 years ago or 30 years in the future and it’d still be good. Though some of the technologies we used were new-ish, (her vegetable chopper is nearing 60), the end result was the same. Marion even has a poem she wrote about evolving ideas regarding cooking.

Finally, as far as advice goes, Marion says that when you’re learning to cook you should have fun with the recipe. “When I started out I slavishly followed the recipe. Little by little I learned to take short cuts and learned how to make things the way I wanted them.”

Marion’s Kitchen Poem
No matter what your cookbook,
You need a different text.
The food they say is good for you
This year won’t be the next.

Then add the beef stock. Add sifted flour, a little at a time to thicken sauce. Add red wine vinegar and beef and let sit.

Serve with a green veggie and potatoes.