‘Cookin’ with Gus’ is a Café of Comedy 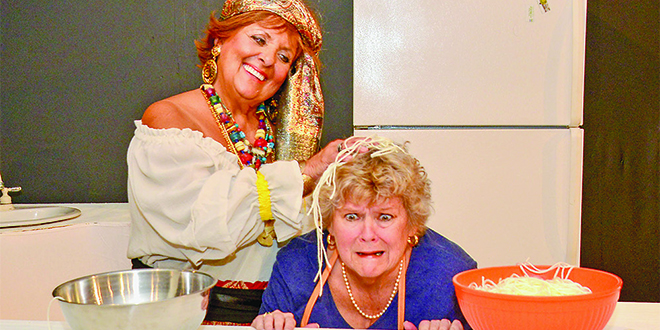 The Marco Players’ production of “Cookin’ with Gus” tells the story of gourmet chef Gussie Richardson (Paula Keenan) and her chance of a lifetime: her very own cooking show. The play was written by actor and playwright Jim Brochu and is directed by Charles Kolmann.

“Cookin’ with Gus” has a fun plot, and a hilarious twist—a food fight! The characters are memorable, such as Bernie (Ron Pirello), Gus’ agent. Bernie has a taste for talking mainly in abbreviations, which makes for a lot of comical misunderstandings. Another spicy side dish is Carmen (Kathleen Barney), the co-host for Gus’s pilot. A self-described gypsy fortuneteller, Carmen is at Gus’s side serving up large servings of laughs. Although Gussie’s boyfriend, Walter (Jeff “JP” Powell), doesn’t want her to do it, they enjoy an honest, heartfelt, poignant relationship.

“Cookin’ with Gus” is on stage February 8 – 26 at The Marco Players Theater, Marco Town Center Mall, 1089 N. Collier Blvd., Marco Island. Shows are Wednesday-Saturday at 8 PM and Sundays at 3 PM. Attend the first week of the show and be entered to win a dinner cruise for two on the Marco Island Princess. Tickets are on sale at www.TheMarcoPlayers.com or by calling the box office at 239-642-7270.