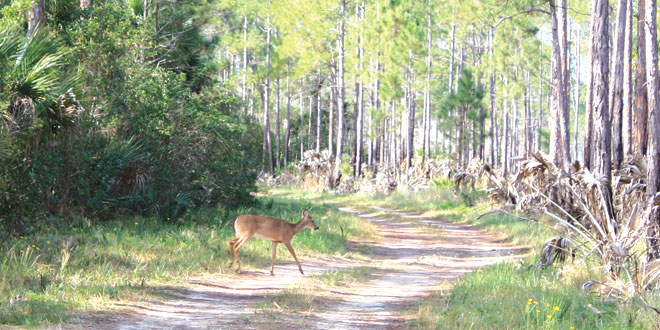 Deer cross a break line heading from an overgrown area to a controlled burn area to forage for food. PHOTO BY NATALIE STROM

“South Florida is the largest lightning receptor in North America, which is why the vegetation in Florida is all fire adaptive and fire dependent. It needs fire, it’s learned to evolve itself around fire over time, and if we don’t mimic the natural fire regime we’re going to have overgrown vegetation.”

Cass Palmer knows his way around a wildfire. He also knows more than just a thing or two about the importance of controlled burns throughout southwest Florida. The District Fire Management Officer for the U.S. Fish and Wildlife Service is assigned to the entire portion of south Florida as well as Puerto Rico. Not only does he develop “Burn Plans” for controlled fires, but he also helps control wildfires when they do strike, whether it be from lightning or a cigarette butt carelessly tossed out a window.

Palmer invited Coastal Breeze News to visit the National Panther Refuge for a breakdown on controlled burns, wildfires and the history of fire in Florida.

Firefighters work to suppress a wildfire along I-75. PHOTO BY QUINN ROSEBOOM

(RBNERR), concurs. “It is common knowledge by now that Florida developed through natural fire over hundreds of years. There is even architectural evidence that Native Americans used fire as a benefit. It helps replenish soils.”

“With the influx of the human population in south Florida we built roads and houses, we started putting fences up, and we started fighting fire instead of letting it do things naturally,” explains Palmer. In turn, the land became overgrown, creating plenty of fuel for a fire. During the dry seasons of roughly January through May, forest fires easily raged throughout the state. According to RBNERR research, it was not until the Yellowstone fires of 1988 that prescribed burning re-emerged as a land management tool across the country.

The number one purpose for prescribed burns is human safety. Overgrown vegetation can lead to wildfires, and controlled burns help ease the rate of unnecessary fires. The growth of Florida has brought development right up to the fringe of natural and protected areas such as RBNERR, the National Panther Refuge and Big Cypress. What is known as the “urban interface” is the most challenging type of controlled burn, according to Wilson, because the smoke from the fire and the fire itself must be maintained so they do not disturb homeowners or the flow of traffic.

A controlled burn in action. PHOTO COURTESY OF ROOKERY BAY

the same issues at the refuge as portions of the 260,000-acre park sit directly along I-75. The same goes for Bob Degross’s prescribed burns in Big Cypress National Preserve. The chief of interpretation and public affairs works with his burn team to keep campers and those driving along US-41 safe.

The second most important reason is to recreate the natural process of burning the land for the ecosystem and wildlife. Palmer’s job at the National Panther Refuge focuses heavily on these aspects. “You can’t really burn for the Florida panther, you can’t really provide suitable habitat for the Florida panther,” he explains. “But what you can do is make its favorite meal happy. So basically, we’re a deer farm, and we burn to keep the deer happy. If the deer are happy the cats are happy.”

“We have the refuge broken up into compartments. We do this for two reasons: prescribed fires, and also if we were to get wildfires, we have break lines all through the refuge.” The break lines also act as roadways as well as open areas for fire teams to work during either event.

The National Panther Refuge alternates compartments and tries to burn them every three to five years to allow for recovery. Palmer also considers the panther population even further by burning one site 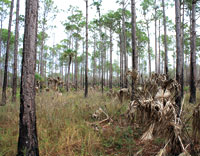 This section in the National Panther Refuge was hit with a wildfire in 2011. Palmer’s team controlled the flames and used it as a natural way to burn the land.

and letting the one next to it stay overgrown. It gives the deer a chance to see and eat while allowing the panther to hide in the adjacent section and secretly stalk its prey.

Unfortunately, these overgrown areas are the most susceptible to wildfires because of the amount of “fuel” they create in the form of dead debris and dry plants. When these wildfires happen, such as one at the National Panther Refuge in 2011, units are dispatched from all over to contain the fire. The natural break lines can sometimes control the fire and end up becoming beneficial, but often times they can burn out of control. The fire in 2011 was cordoned off into only three of the twenty-plus sections thanks to quick thinking and excellent burn management.

“We work together by sharing resources,” adds Palmer. “We share staff, fire engines and equipment. We work with the state parks, the state forest services, the national park service, we’re all just working together.”

Teamwork is a key factor in properly conducting a controlled burn, but an even more important aspect is the weather. “Wind direction is very important,” explains Wilson, especially when it comes to burning areas of RBNERR that lie along US-951. 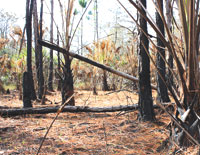 The looks of a fresh controlled burn. PHOTOS BY NATALIE STROM

at the east and west end of the preserve sending information straight to the National Weather Service. Wind, temperature and humidity will ultimately dictate whether or not a scheduled controlled burn will be able to take place.

Palmer’s team develops Burn Plans and RBNERR uses specific “prescriptions” to offer the what, when, where and why of every burn. All are different based on land topography. For example, RBNERR has a prescription for its barrier islands which need burning and also see the occasional wildfire, and the National Panther Refuge must make a Burn Plan for three different types of habitat within its confines. The plan is sent to their respective agencies, and they respond with a yes or a no. Given a yes, then the weather must cooperate and back-up teams must be at the ready.

The science and patience behind the burns is immense. Every year, the plans are adjusted as new techniques are learned and shared throughout the country. Many of the properly trained personnel, or Firefighter II as they are called, travel the country during the different wildfire seasons. Florida’s season runs from about January until May while the western portion of the country sees wild burns in the summer. Once again, staff is shared, but this time it is across the country.

“We are able to 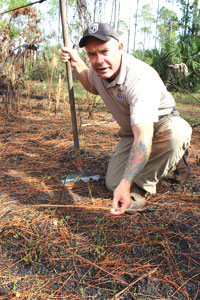 Cass Palmer points out grass regrowth in an area that was burned just two weeks prior.

utilize our training and learn other ways to manage fires,” adds Palmer. “Controlled burns are an art form that take years to understand and try to perfect. But when Mother Nature gets mad, you get to see it firsthand in this job, and when that happens, it’s not glamorous.”

DeGross of Big Cypress offers up some tips to prevent these wildfires. “Primarily, don’t throw cigarettes out of a car window, and be sure to get a permit to burn yard debris. If conditions are not right to burn yard waste the county will not provide a permit. You can find the best info at www.freshfromflorida.com/Divisions-Offices/Florida-Forest-Service/For-Communities/Firewise-Communities.

Wilson also offers advice to those who are concerned about smoke in the area. The parks, refuges and preserves do their best to inform those who live near controlled burn sites ahead of time, but any concerns about smoke or fire may be answered by the Florida Forestry Service. The office that coordinates the southwest Florida region may be reached at 239-690-3502.

Weather permitting, prescribed fires will commence every day around 9 AM from Jan. 18-22 in any of the following areas: along Collier Boulevard/SR 951, Shell Island Road, and units west of Tower and Barefoot Williams, south of Treviso Bay area. 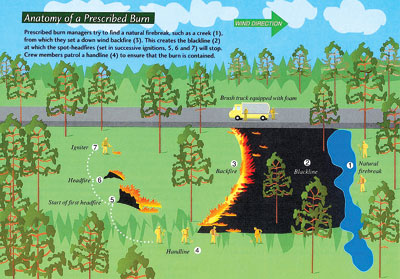 DOF Fire diagram: The anatomy of a controlled burn. COURTESY OF THE DEPARTMENT OF FORESTRY

Cypress National Preserve anticipates burning approximately 20,000 acres in 2014, and potentially more, as conditions and funding allow. There are four areas Big Cypress will be focusing on in the coming year:

• The Sanctuary, northeast corner of the Preserve. With the accumulation of vegetation this operation is anticipated to be a slow, expensive, long-duration treatment. The prescribed fire will initially be done while water levels are high, to reduce the risk of tree mortality. The operation in the area will increase protection of homes in the vicinity.

• Little Deer, central area of the Preserve. Treatments will focus on protecting the cluster of private properties in the interior of the national preserve, building off of the Jarhead Fire in 2011and recent prescribed fire treatments. This burn will also enhance habitat for a number of threatened and endangered species that call Big Cypress home.

• Bear Island Unit, northwest corner of the Preserve. This operation will protect State Road 29 and Florida Panther National Wildlife Refuge from wildfires that could occur within the national preserve north of Interstate-75 and east of State Road 29.

• South of Loop Road in the Paces Dike area. Burns south of Loop Road are anticipated to be combined with burns being planned by Everglades National Park. The objective of the operation is to protect private properties, reduce invasive plant clusters, and improve deer habitat.