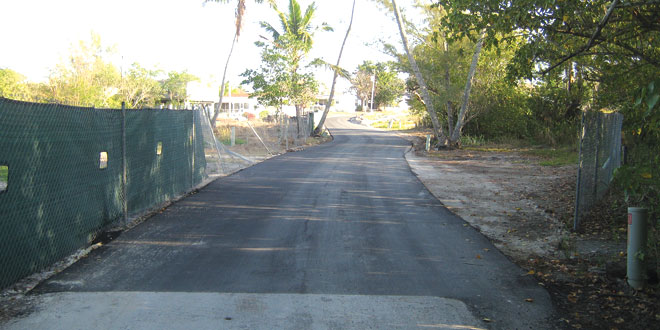 Fences in disarray, a repaved road that doesn’t allow two cars to pass simultaneously and overgrown grass and debris has replaced the once beautiful entrance to the Smallwood Store thanks to FGG. PHOTOS BY NATALIE STROM

In a previous article, I stated that on Thursday, October 10, Commissioner Tim Nance along with County Attorney Jeff Klatzkow and the attorney for the Smallwood Store met with Chokoloskee neighbors and the public to discuss Collier County “vacating” a portion of Mamie Street, thereby making it a private road for Florida-Georgia Grove LLP. This issue to vacate came about because Florida-Georgia Grove wants control of the public road passing through its property (which they had bulldozed in April 2011, denying access to the historic Smallwood Store and Museum and a private property owner, both of whom had no other means to get to their property except by boat).

A group of Parkway Village residents, who also live on Mamie Street, would be affected by the road being private, so since that October meeting Parkway has been negotiating with Florida-Georgia Grove to obtain an easement to their property. Because of this and the overwhelming opposition to the County vacating a public road, the Public Hearing scheduled for October 22 was postponed to December 10. Since negotiations have not been finalized and the attorneys need more time to work out a settlement with Florida-Georgia Grove LLP, the Public Hearing has been postponed again; the new date is Tuesday, January 14, 2014.

In regard to postponing the hearing, the County Attorney’s office said, “It is our full intention to allow the public to weigh in on the discussion as is required by statute when the parties wish for this to come forward; it was decided not to bring it forward until all of the parties to that settlement are ready.” The public has continued sending emails, letters and petitions to the County Commissioners requesting them to listen to them. If the County Commissioners wish to serve the “public,” they will take all comments into consideration. However, at the October 10 meeting with constituents, the county staff 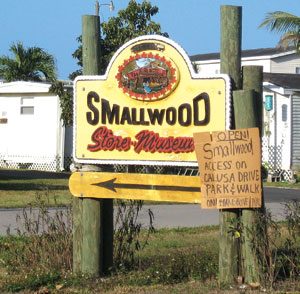 In 2011, after FGG bulldozed Mamie Street without warning, the store was closed indefinitely until it could find an alternative for patrons to visit the public museum that is Smallwood. This meant parking a fair distance away and walking to the historic landmark.

said that they would take into consideration only those who had a “direct” interest in Mamie Street (the property owners who lived along the road) and that the public has only an “indirect” interest.

What is going on? To most of us, the situation seems so simple. Florida-Georgia Grove (FGG) purchased the property knowing that it was a public road. At two separate court hearings, the judges told FGG that the road was public and they were required to restore and repave the road that they had bulldozed. Why is the County now giving into FGG’s request to make it private? If the County would just stand up to them and fight for the right of the public to continue to use a road that they has been used for over 100 years, then all these “settlement agreements” and time and energy on everyone’s part would be avoided. The County says that FGG would take them to court if an agreement is not signed. It won’t be the first time that FGG has had to face the County in Court; FGG lost their appeal on October 20, 2011, and again on November 3, 2011. Last week, on December 6, the County Code Enforcement Office had to take FGG to court just to clean up their property. What will they do if they take control of the road to the Smallwood Museum? FGG has been “non-compliant” since August. The Code Enforcement Special Magistrate on December 6 ruled that Florida-Georgia would have until December 31, 2013, to do whatever it takes to clean up their property; they were also fined with court fees and a daily assessment until the violation is corrected. If FGG fails to abate by the end of the year, the County will have to take the necessary steps to bring the property into compliance. Again, why is the County willing to turn over our public road?