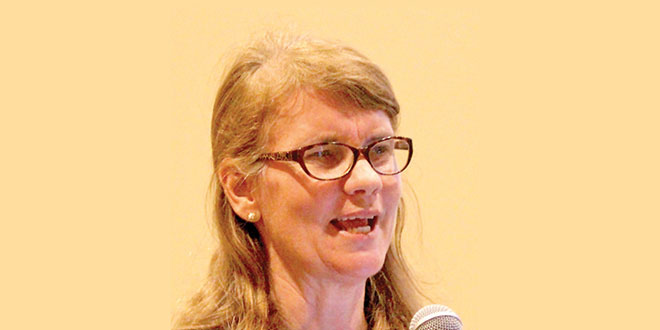 The time is now for creating a framework to preserve one of the world’s most precious resources, its freshwater reserves, in Florida and worldwide.

That was the message delivered by long-time environmental and science journalist and author Cynthia Barnett during her lecture entitled “Blue Revolution, A Water Ethic for Florida,” held recently at the Rose History Auditorium.

“Water has become the most degraded ecosystem in the U.S., which I know can be hard to understand in one of the country’s wettest places” said Barnett, who teaches environmental journalism, and nature and adventure writing at the University of Florida.

She said reducing usage and pollution are essential to protecting aquifers and other freshwater sources for future generations, as are:

Adopting measures to cut usage in residential and commercial settings, such as high-efficiency toilets and low-flow shower heads

Aside from plentiful annual rainfall, the second most in the United States, Florida’s blessings also include abundant fresh-water reserves, with an aquifer providing drinking water for more than 90 percent of the state. The Floridian Aquifer also supplies the state’s more than 1,000 freshwater springs, the most in the nation.

But some springs have dried up, their waters dispersed elsewhere, due to phosphate mining activity. And pollution and overuse as Florida’s population rises upward are having an impact on groundwater reserves. Barnett also pointed to the blooms of harmful algae that regularly foul the state’s waters as evidence of system degradation.

She said there’s been significant progress since the late 1960s, citing as examples the clean-ups of once heavily polluted Pensacola, Tampa and Biscayne bays, and the federal Everglades Restoration Project.

The Everglades project became a reality thanks to the efforts of Gov. Jeb Bush and pressure from dedicated individuals, civic leaders and the business community, explained Barnett, who said similar public-private alliances will be essential to future conservation efforts.

Barnett has written three books, all water-related, the most recent being “Rain: A Natural and Cultural History,” which was a finalist for the 2016 PEN/E.O. Wilson Literary Science Writing Award. She’s also written “Blue Revolution: Unmaking America’s Water Crisis,” which the Boston Globe named one of the top 10 science books of 2011. Her first book was “Mirage: Florida and the Vanishing Water of the Eastern U.S.,” which won the Florida Book Awards’ gold medal for best nonfiction.

Hers was the first of four lectures that the Marco Island Historical Society will hold during the 2016-2017 season in conjunction with the Florida Humanities Council’s speaker series. The topics all examine the state’s history, culture and people, and each speaker is a well-known, award-winning expert in their field. For information on upcoming topics and speakers, visit www.themihs.com or call 239-642-1440.