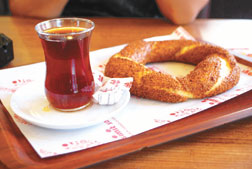 Everyone must know by now that I was born and lived the first 20 years of my life in Istanbul; a mysterious, photogenic and historic city on the shores of the Bosporus Straits, that divides the continents of Europe and Asia. As a young boy growing up in Istanbul, the only way we could get across the Bosporus to see our family members who lived on the “other side” or to go to any city which was located in Anatolia (Asia Minor) which comprises 85 percent of the land mass of the country; we had to take a ferryboat across to start our trip. If we were traveling by car, we would have to get up very early in the morning, pack our car and drive down to the ferry-boat station in my father’s most reliable green 1956 Chevy in order to get in line to make it to the earliest available ferry. Large trucks carrying goods from Istanbul to points all over the country would be lined up in neat formations on the waiting area for many hours, their diesel engines running harmoniously. The trucks had priority to get on board before passenger cars and the wait could be very long and uncomfortable. However on most such days, my father would calmly walk up to the station chief and tip him handsomely to have our car moved to the front of the line. The same procedure would be followed on our return trip the same day or some days later depending on where we were headed. 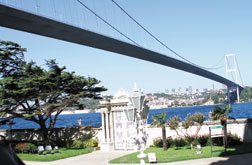 completed. As usual there were many delays due to the naysayers who predicted unbelievable natural disasters, devaluation of historic values, European invasions, Crusaders attacking the City, etc. if the bridge was built.

The idea of a bridge crossing the Bosporus dates back to antiquity. Greek writer Herodotus in his “Histories” recorded that Mandrocles of Samos once engineered a pontoon bridge for Emperor Darius Great I of Persia (522 BC – 485 BC) that stretched across the Bosporus, linking Asia to Europe, so that Darius could pursue the fleeing Scythians as well as move his army into position in the Balkans to overwhelm Macedon.

The first project for a permanent bridge across the Bosporus was proposed to Ottoman Sultan Abdul Hamid II by the Bosporus Railroad Company in 1900, which included a rail link between the continents.

The modern day decision to build a bridge across the Bosporus was taken in 1957, by the then Prime Minister of Turkey Mr. Adnan Menderes, who was thrown out of office and hanged as a result of a military coup in 1960. The contract to build the First Bridge was signed in 1968, with construction starting in 1970, and the project was complete in record time in 1973.

Finally, the “Bosporus Bridge” which is locally referred to as the “First Bridge” was completed on October 30, 1973, and today it is the 17th longest suspension bridge in the world. On December 29, 1999, one billionth vehicle crossed the bridge. The naysayers were wrong as usual; the bridge proved inadequate for the traffic it carried and a second bridge was planned and opened on July 3, 1988, and it was named after the 15th century Ottoman 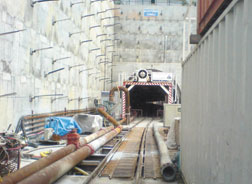 Sultan Mehmed the Conqueror, who took Constantinople (Istanbul) in 1453 and ended the Byzantine Empire. Today, it is the 13th longest suspension bridge in the world. The bridge is referred to as the “Second Bridge” by the locals. Once again the naysayers were proven wrong as an average of 150,000 vehicles a day cross the bridge.

The City of Istanbul grew and spread out exponentially over the years, perhaps as a result of the two bridges or perhaps her beauty which attracts people like flies to light. Traffic in Istanbul became unbearable and another project to connect Europe and Asia via a tunnel under the Bosporus which Turks had dreamed of since 1860, was brought back to life. Plans were drawn to construct an “Immersed Tube Tunnel” for trains to achieve this goal. Soon, that dream will come true in the form of an 8.25-mile-long Marmaray Tunnel (name combines the Sea of Marmara and Ray meaning “rail” in Turkish), which will provide a rail link for a rapid transit system as well as connecting Europe to Asia via an uninterrupted rail system.

Most of the area around Istanbul is in an earthquake zone. According to seismic experts, the nearby North Anatolian Fault has a 62 percent chance of generating a strong earthquake in the next 30 years. Although tunnels on such a scale have been built before, this created a major hurdle for the engineers. However, they did come up with a very practical and workable solution. While most of the tunnel will be bored through solid rock, the central mile-long section under the Bosporus will consist of an “immersed tube” fabricated in sections on the surface and then sunk 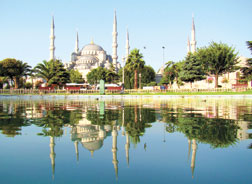 and joined together on the seabed. Unlike a tunnel bored through rigid rock, the submersed sections will be connected by flexible joints made of thick, rubber-reinforced steel plates, which can absorb quake movement without breaking. The tunnel was scheduled to open in 2010, but the engineers ran into another problem; as they dug the entrances of the tunnel on either side of the Bosporus they found ancient artifacts. Archeologists had to be brought in to continue the dig which slowed down progress but some of the finds changed forever some historical facts about the City of Istanbul along the way. When it finally opens in 2013, the Marmaray will be the deepest such tunnel ever constructed, with a maximum depth of 180 ft. And, East and West will meet without getting their feet wet. An idea that has existed for 150 years will finally become a reality.

I like progress and I have nothing against having two magnificent bridges and an engineering wonder immersed tube tunnel connecting two continents and two parts of a magical city. However, I will always fondly remember our family’s early morning ferry-boat crossings, the long lines, noises and smells of diesel trucks waiting in line, fighting words of the drivers trying to get on the ferry for an early start to their long journeys, feeling the cool, fresh summer morning air on my face, drinking a glass cup of aromatic Turkish tea with two lumps of sugar while feasting on a simit (a circular bread covered with sesame seeds) on the ferry.

Some memories never seem to get old.