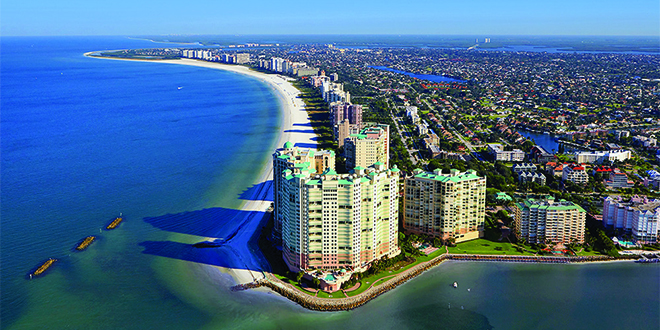 Photo courtesy of Kristine Bareis | Cape Marco, with the Belize in the foreground.

Last week 56 condos built between 2000 and 2008 were for sale. Altogether 397 condos were for sale on Marco Island last week. Prices for these recently built condos ranged from $210,000 for a two-bedroom, two-bathroom 985 square foot condo built in 2001 that can be rented daily at the Olde Marco Island Inn and Suites to a $7 million penthouse at Belize with 9,279 square feet on the 25th floor built in 2004. There is a lot of variety among the island’s newest condos.

Condos for sale at the Belize in Cape Marco are described as having captivating and inspiring views and use words in the MLS like “spectacular, privileged location, exquisite details, one of a kind, magnificent, lavish, superbly appointed, rarely available, breathtaking, elaborate, stunning and ultimate.” Condos here start at $1,525,000 for a three-bedroom, three-bathroom 2,678 square foot unit, to the penthouse mentioned above.

Madeira, built in 2006 and located right in the center of Marco’s crescent beach, had three condos for sale ranging from $2,895,000 for a 3,297 square foot three-bedroom, three-and-a-half-bathroom condo to $4,200,000 for a 3,539 square foot four-bedroom, three-and-a-half-bathroom apartment. Described in the MLS as Marco Island’s most luxurious beachfront community with lavish resort style amenities, Madeira features beachside pool, barbecue, tennis, billiards room and guest suites. The condos come with entrancing views of Marco Island’s pristine beach and turquoise waters.

The Esplanade, built in 2003 and 2004, had condos for sale from $595,000 for a two-bedroom, two-bathroom 1,414 square foot condo to $1,095,000 for a three-bedroom, three-and-a-half-bathroom 2,442 square foot condo. The Esplanade looks over Smokehouse Bay and marina and features pools, fitness center and secure garage parking. The waterfront promenade, fountains on the plaza, retail shops and restaurants compliment the lifestyle.

Vintage Bay C and D buildings were built in 2001 and 2006. Described as nestled in nature, this gated community is pet-friendly and offers assigned parking in the under building garage, and has a community room with fully equipped kitchen, sparkling screened pool and a private boardwalk leading to a gazebo on the bay. This is a nature lover’s paradise, tucked away for serenity. Prices here range from $319,000 for a three-bedroom, two-and-a-half-bathroom condo with 2,103 square feet to $549,900 for a 2,103 square foot three-bedroom, two-and-a-half-bathroom condo.

The newest condo on the island is Mariner’s Palm Harbor, built in 2008. Only one condo is for sale here and is priced at $1,359,000 for a three-bedroom, three-and-a-half-bathroom with 2,895 square feet and a boat dock.

Other recently built condos for sale can be found at Bayfront Place, Caxambas South Beach Terrace, Courtyard Towers, Mirage on the Gulf, Pier 81, Provence of Marco, Tropicana, Veracruz and Villas at Waterside. Just ask your local realtor for details.