Competitive league to shut down, unless…? 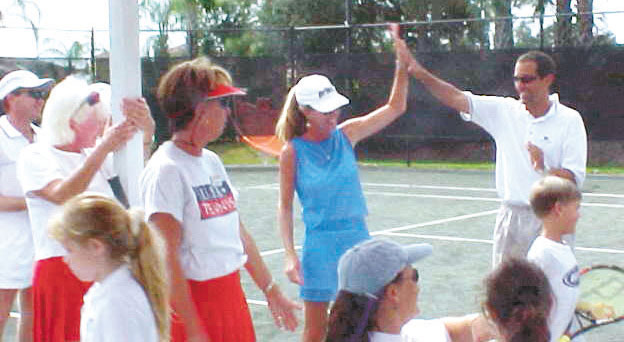 With our world moving at such a fast pace, one wonders how some things just never change? Just take a peek at our technological field with the recent inventions: IPOD, I Phone, IPAD, Satellite radio robotic surgery, I could go on and on. But in the tennis world and in particular league tennis, we seem to be missing the big picture. If we can break it down and make it real simple; no one playing league tennis is going to receive huge prize money or be sent to the next Grand Slam event. Therefore, all of our league participants need to focus on the stuff that really holds water:

• Discover other tennis facilities in your local area.

However, after a recent tennis meeting, we all learned about other activities that completely detract from growing the great game of tennis and has many leaders scratching their heads in disbelief. Clearly, the ugliest person is the one who always blames his or her partner after a tough loss.

This person is so insecure that he has to blame someone else and never will fully grasp the meaning of being a good tennis partner. If this person wishes to improve as a player, let alone grow as a person, he needs to take responsibility for his actions and realize it takes two to win or two to lose.

Enough said. We have too many people wrapped into their own egos who make too many demands on the captains. The usual complaints are one of two items: The player wishes to play higher or he demands to choose his partner or with whom he will not compete on the tennis court. Wow!

Now, I listed the usual complaints but I would like to add a few more concerns I learned at the last tennis meeting. Even though it starts out with the best intentions, there are too many captains who take this league-stuff too seriously. The captain insists that other club members must travel to support their team…sounds good, right? Not necessarily.

Too often the excitable fans, usually new to the game, cheer for mistakes! Naturally, they don’t see it that way but the end result is that they have come to a different facility and begin to take over. Ladies and gentlemen, if you do not understand tennis etiquette, err on the side of caution!

Most tennis points end in an error…pick your spots to clap or cheer as we do not want to make the other team feel uncomfortable. Another area of concern involves our league rules…yes, some are more important than others. As long as I can remember, we wanted to make sure each club fielded its members and not a daily or weekly visitor. In other words, we wanted to make sure we were all competing on a level playing field.

On the same subject, we use deadlines for team sign ups and deadlines for adding to the roster. Now, if a club innocently forgot to add one of their regular competitors, there is no reason to default unless this facility continually breaks rules. We need to use a little common sense because it is recreational, not professional tennis and we want to grow the game instead of turning people off.

Hey, it’s great to have tons of league championship winning plaques in your trophy case at your club but not at the expense of having a good time at the next tennis mixer. We need to have a special blend of competitive tennis and a mixture of good ole fun on the tennis court. If we really want to see more people participate in tennis, do it with a smile. Trust me, it goes a long way. Did you know it only takes a few muscles to smile but well over forty facial muscles to frown?