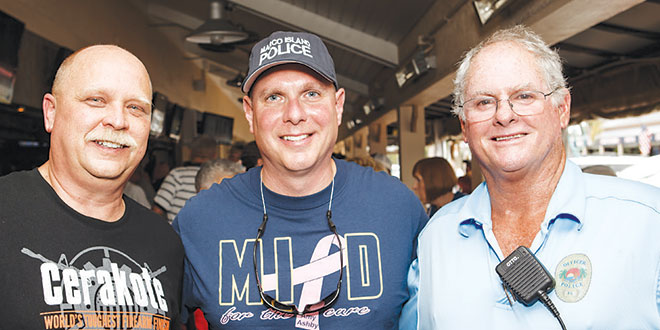 Little did Amy and Paul Ashby know when Amy’s cancer treatments began, that somewhere down the line they would experience the true essence of Marco Island; a group of people who roll up their sleeves, dig in and get to work when there’s a need. What transpired at the fundraiser for Amy Ashby at the Marco Brewery last weekend defines our COMMUNITY.

Amy’s cancer is a very aggressive type of cancer and treatments are extremely costly. The Ashbys have three teenage children. The event was

a fundraiser, and was organized by a few of Paul’s fellow officers at the Marco Island Police Department, Frank Steiger, Josh Ferris and Clayton Smith, to help offset some of the medical expense.

Once these three policemen put their heads together, they organized a great family fun event. The event had a silent and live auction, food and raffles. Josh Ferris manned the microphone and worked the crowd. He had two bidders against each other on a beautiful custom designed pen and he worked them like a fine-tuned instrument. 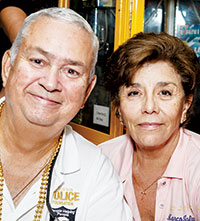 The pen alone raised $1,500! It was handcrafted by Chuck Ludwigsen. All said and done, with the raffles, the auction items and donations, the event raised over $25,000 for Amy’s cancer treatment expenses.

It was a ‘community’ that came together to show support for one of their own – regardless of age, income level or employment. Councilman Bob Brown said it best, “This is what Marco Island is about. We put aside differences and come together for a cause.”

Organizers from the Marco Island Police Department want to thank everyone 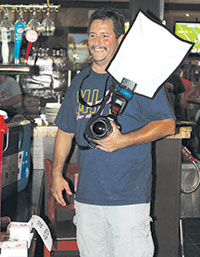 Frank Steiger, in front of the camera for a change.

who participated. “There isn’t enough room to list them all,” said Frank Steiger, “we want to thank Frank LaCava and the staff at the Marco Brewery, Kurt Koon and the Marco Police Foundation, as well as the fifty (plus) businesses and the countless citizens who supported this cause. A very special thank you goes out to my co-workers Clayton Smith, Josh Ferris, George Guyer and Paul Keys.”

If you missed the event, but would like to make a donation to assist with Amy’s cancer treatment expenses, see the Ashby’s GoFundMe page at www.gofundme.com/ashby-sj.