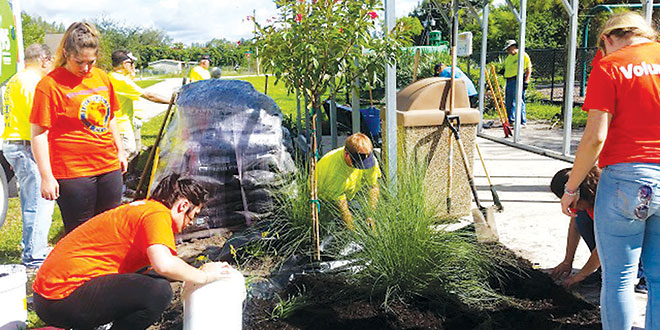 Youth from the Interact Club pitched in to build the shelter for Copeland kids who take the school bus.

Possibly most people reading the following story have never heard of Copeland, right here in Collier County. If you have…have you ever been there? There are only 82 homes in Copeland and approximately 325 people. Some are 3rd and 4th generation Copelanders. The figure I heard two years ago was that they had an unemployment rate of 72%. Many have no cars, and they don’t even have a mail delivery. There is a tiny Baptist church there that is always clean and cool.

Copeland has two separate and distinct “villages.” When the re-districting lines for commissioners changed, Copeland became a part of my district. The villagers invited me to attend a “meet and greet” with the residents, which I was delighted to do. They showed me around and introduced me to a number of people. They also wanted to tell me of some of the things they hoped I could help them with. Their wishes were simple and humble. There were huge trees growing over their electrical “plant,” but the electric company never responded to their concerns that a storm might blow one of those trees over and damage homes or destroy the electricity serving the whole community. Actually, it wasn’t a difficult task once I got our county staff to contact the right people at that electric company to get the job done. They responded and the trees were gone before long. The people also asked to have some of the debris around a county area near water, mowed and cared for, because snakes and alligators loved to hang around in the tall grasses. Okay! We

Through the efforts of volunteers, this bus shelter was built in Copeland.

were on a roll. Then, at our next meeting, they asked if they could have a bus shelter where the kids could wait for their school buses. That task was a lot tougher. The schools don’t have bus shelters! I asked around to see if we had any old CAT bus shelters we were replacing that we could use there, and yes, we found some, but two years later still nothing was done. After another long wait we found that we could not safely use those shelters, plus a few more negatives. Back to square one. Finally I found the right guys to get the job done, the county commissioners approved it, and hooray, we were back on a roll. Travis Gossard, from Collier County Road and Bridge Maintenance, and his band of terrific guys found the right structures, installed them and voila! We had their wishes granted- albeit a few years later. BUT – we needed plantings, etc. Up stepped Craig Woodward and his mighty team of Sunrise Rotarians from Marco Island, with Debra Shanahan as President! These guys and gals bought all of the plantings, set up the “festivities,” worked hard, and had a ball reaching out to help others! Craig and Bonnie Woodward invited everyone to their Everglades home for lunch afterward. The residents of Copeland said they would be happy to care for the plantings from here on in. I just want to thank everyone for going above and beyond the call of duty! You impressed a tiny community, and you make OUR community proud to call you our own! Being that this 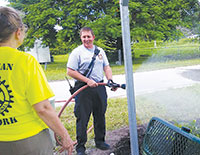 Ochopee Fire Department pitched in by watering the plantings.

shelter is so near to the tiny county park, it gives parents a place to sit and watch their children play. Thank you all, for all you do for others!

*Not such a happy story is coming from South Beach on Marco Island. Our Flotilla Commander, Keith Wahltman, alerted the Collier County Parks and the NCH Safe & Healthy Children’s Coalition of “appalling” vandalism to the life jacket racks placed at the beach for children to use and return, free of charge. This is the only act of vandalism the USCG Auxiliary can recall throughout the program. South Beach gets an influx of summer visitors, as they stated, and they also experienced the largest loss of jackets at this location last year. So, those of you who use this beach, please be on the lookout for those vandals who have no respect for other people’s property. If you see something happen, call the police department please!

*Congratulations to the Marco Island Hilton for an outstanding job at the Tourism Awards Banquet! I wish you could have seen the looks on all the employees as they cheered each other on, and when it came to the general manager, Mac Chaudhry, he was ecstatic with happiness for his winning employees, whether they took the prize or were in the spotlight for being nominated – they were all winners! The smile on Mac’s face said it all! He was so proud of them. To try to sum it up…all of the winners were honored for their exemplary service in each of the categories. Take a bow everyone! You deserved every golden minute of praise you received!