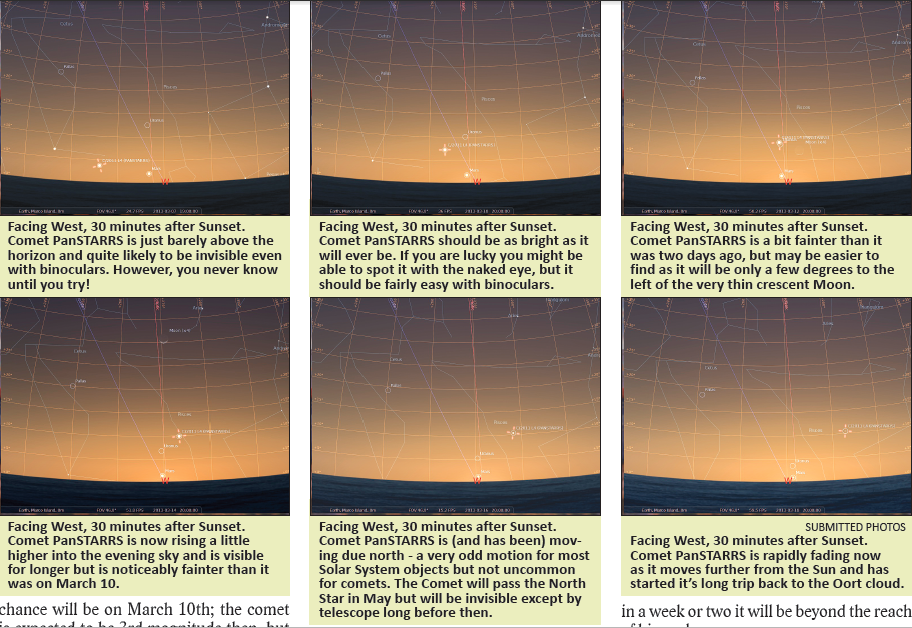 It has been said that Comets are dirty snowballs from deep space where they formed far from the Sun and warmth of the inner Solar System. The Oort Cloud surrounds the Solar System and extends outwards perhaps two or three light years.

There are maybe a trillion comets orbiting the Sun in the Oort cloud; the grip of the Sun is very weak so far out, and every now and then a passing star may eject a few comets into interstellar space or cause them to fall inwards towards us. We have just such a visitor tonight.

Comets are named for their discoverers, or in this case the instrument package that did the work – the full official designation is C/2011 L4 (PanSTARRS). The C/2011 means a comet and year of discovery, the L4 is a sort of code indicating it was the 4th comet discovered in the last half of June.

As a comet drops inwards towards the Sun the increasing warmth vaporizes the ice producing a very temporary atmosphere known as the coma. It is this coma we see and recognize as a comet; the actual comet nucleus is so tiny as to be almost invisible even to powerful telescopes. The larger and more spectacular comets produce a distinct tail as the solar wind and radiation push the coma away from the nucleus. A peculiarity of comets is that the tail always points away from the 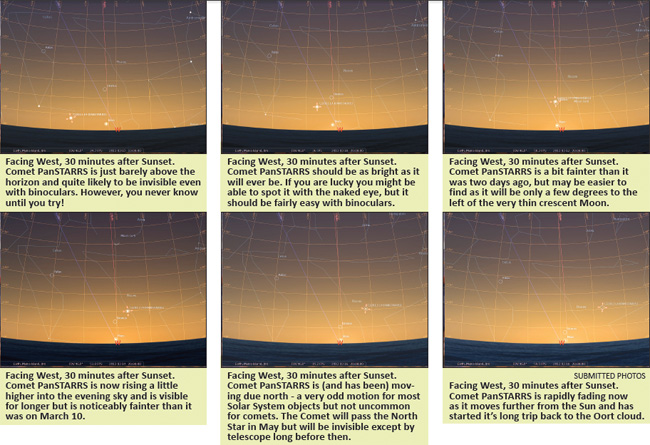 Sun no matter if it is coming or going.

Comet PanSTARRS will be visible very low in the west starting March 7th although it probably will be almost impossible to locate before it sets. A much better chance will be on March 10th; the comet is expected to be 3rd magnitude then, but it will be quite difficult to spot in the evening twilight. In all likelihood this will be a binoculars only object. There will only be a very narrow window of opportunity to spot the comet on any given evening; 30 minutes after sunset the comet will be less than ten degrees above the horizon. This means the beach is the best possible place to be!

The comet is inside Mercury’s orbit and reaches its closest point to the Sun on March 10th. That makes Comet PanSTARRS the fastest moving object in the Solar System and it will be in a noticeably different spot each evening. Additional finder charts covering other days are available on the website www.coastalbreezenews.com. As the comet pulls away from the Sun it will rapidly fade from view; in a week or two it will be beyond the reach of binoculars.

There is always a chance a comet will beat expectations or fizzle out; we will find out what Comet PanSTARRS will do soon!