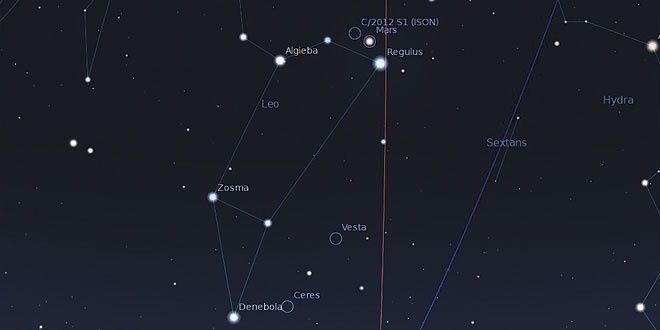 SOUTHERN SKIES
By Mike P. Usher
usher34105@earthlink.net
On October 1 Comet ISON breezed by Mars at a safe distance while every space probe on or around the planet with a working camera tried to take its picture. Sometime this month the comet is expected to brighten enough to be come visible to the naked eye, although what its ultimate brightness will be is still a matter of considerable debate. Comet ISON seems to be fizzling out, a not uncommon occurrence for comets making their first trip around the Sun. Scientists have backed off on their claims about the comet becoming as bright as the Moon. In any event ISON must first survive its close brush with the Sun on November 28th; the comet is expected to pass less than million miles from our personal star – total destruction is possible. If the comet squeaks by the Sun then it passes our planet on December 26th at a safe distance of 40 million miles.

In the chart this week Comet ISON still appears close to Mars, but in actuality it’s about 20 million miles away from the Red Planet. Mars is easy to find, being quite close to Regulus. Mars is probably much dimmer than you remember, but it’s close to 200 million miles away! Comet ISON is more of a problem – it may, or may not be visible in binoculars. Look for a fuzzy spot to the left of Mars; probably no tail will be visible.

While Leo is commonly considered a spring constellation, that is a conception based on when casual stargazers usually view it. In reality of course one can view their favorite constellation or planet almost anytime of year – if you are willing to get up early enough. Leo is visible anytime the Sun is not actually passing through it.

Mr. Usher is President of the Everglades Astronomical Society which meets the second Tuesday of the month Sept. thru June at 7:00PM in the Norris Center, Cambier Park, Naples.