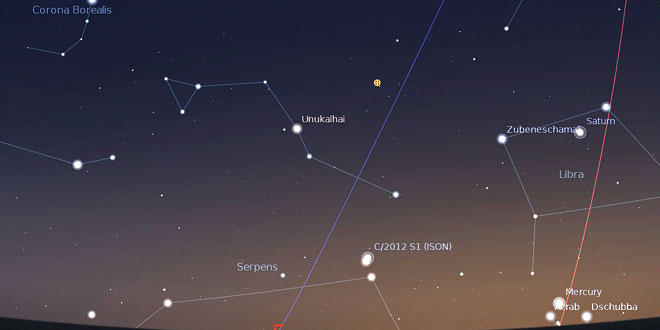 Looking East, 6:15 AM December 6th. Can you spot Comet ISON? It might have been destroyed on Thanksgiving Day. SUBMITTED PHOTO

At the time of this writing, the ultimate fate of Comet ISON was still in doubt. On Thanksgiving day the comet reaches its closest point to the Sun, (called perihelion by astronomers) and is less than one million miles from the solar surface. At that distance the heat is enough to melt solid iron! On the other hand, the comet is a big chunk of loosely packed ice and dust which is a pretty good insulator; it may well pull through. The odds are around 50-50.

Until recently the comet was fizzling out, a not uncommon thing for new comets making their first trip to the inner Solar System, until Thursday November 14th when the comet suddenly became visible to the naked eye. A blast of dust or water vapor emerged from the nucleus and caused the comet to jump two magnitudes in brightness. With any kind of luck the show should continue after the comet rounds the Sun.

During the first week of December the comet will be low in the sky in the morning twilight – which may make the comet hard to see without binoculars. Over the next three weeks the comet will dart quickly away to the northeast rising higher in the sky as it does so. On December 26th the comet will reach it’s closest point to Earth when it will be near Draco’s back and visible for much of the night. On January 7th it will only be a couple of degrees away from Polaris the North Star and visible all night long; although by that date it will only be seen through binoculars.

As the comet pulls away from the Sun, (if it pulls away), it will rapidly dim; on the other hand it will be approaching Earth during this point in its orbit and that will partly offset the dimming. It is likely to be visible to the naked eye throughout the month of December in a dark sky.

An interesting bit of comet trivia is that a comet’s tail always points away from the Sun, regardless of the actual motion of the comet. This is caused by the pressure of the solar wind and light. Many comets, including ISON, have two tails; one is dust, the other is ionized gas. The two materials move in slightly different directions under the Sun’s influence. Comets normally appear white to the eye, although in a camera’s time exposure photograph the dust tail is often blue. Comet ISON however, is a rather interesting green color! (But only in photographs…)