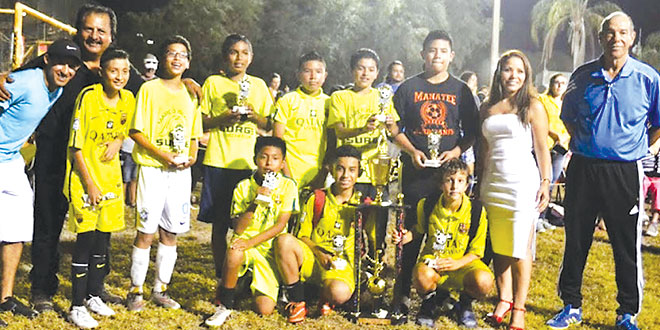 Mexisoccer Naples Youth Soccer League finals last Saturday night had Collier FC competing for the championship in 3 out of the 4 age divisions.

The U14 Collier FC Surge won against Bayern Munich in penalty shots 2-0. “The game was crazy intense,” said head coach Mario Guzman. The match was tied 1-1 at

U14 Collier FC boys rush onto the field after goalie Luis Peralta blocks the last penalty to win the championship.

fulltime. Johnny Garcia made a spectacular save at the end of regulation time to keep the match tied. In overtime, Bayern Munich scored with only minutes left, but the Collier FC Surge boys didn’t give up, and scored just before the end of overtime. Goalie Luis Peralta blocked all of the penalty

Collier FC had 6 teams competing in the spring youth soccer league with 4 teams making to the semifinals.

shots to give Collier FC Surge the championship.

U7 and U9 Collier FC teams both won 2nd place in their divisions. “I am very happy with the success of our program producing quality competitive teams” said Collier FC Director of Coaching Robert Stoutenburg. 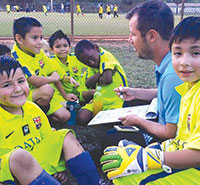 May.  U7-U11 tryouts are on May 20 and 21 at 6PM, and U12-U17 tryouts on May 27 and 28 at 6PM at East Naples Park on Thomason. Boys and girls interested in playing competitive league and tournament games are invited.

Note: Youth soccer teams are comprised of players according to age, usually starting at under 6 (“U6”) to under 19 (“U19”) years of age.