County Commissioner Donna Fiala, who represents Marco Island and East Naples, was host for a group of nine residents who toured the state-of-the-art Emergency Services Center in Naples on January 17th. Thanks to Commissioner Fiala the group had an inside look at the facility and how emergency services are coordinated in the county.

The Jim Mudd Emergency Services Center is named for the county manager who took a strong interest in building the county’s emergency response capabilities. The 11,000 square foot, four story building sits on 20 acres off State Road 951, close to Edison College. The building is situated on filled land to protect against flooding in the event of an otherwise crippling storm or surge. It is a $56 million dollar project with a portion paid by grants; and the facility joins together various elements of community protection functions that were formerly separated. It’s much more cost effective and responsive to public needs. The former facility, in the government complex on Tamiami Trail East was crowded, cramped and inefficient. The new Center opened in 2009.

The building was designed to withstand otherwise catastrophic events, and can withstand wind gusts up to 200 miles per hour, with complete protection for 30 seconds. It has a 175 foot tower that can handle winds up 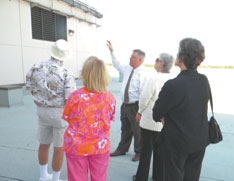 to 175 miles per hour, and the roof is saturated with antenna arrays to insure current and complete communication. Wall panels for the building were actually cast on-site, saving two million dollars in costs, and insuring correct fitting. There are two 2.5 megawatt generators, with 48 gallons of fuel to provide for 14 days of operation if all other power fails.

In a protected area under the building the county has staged Disaster Relief Units that are packed with commodities. There are also trailers that can be used for field operations in times of emergency. All of this means that resources can be deployed to the field in a very brief time span. The county even has the equivalent of the military’s “Meals Ready to Eat” that can be dispatched to the field if necessary. There’s also a continuous supply of bottled water.

Dan Summers, a veteran of many years in emergency operations, is Collier County’s Director of Emergency Services. Dan spent 19 years in North Carolina and worked

through 19 emergency events, including numerous hurricanes. He is in charge of the building and acts to coordinate services with the Sheriff, Medical Department and others, including FEMA and Homeland Security.

In the facility the control center is a 50 foot by 70 foot room that contains ten giant television screens in the front of the room and two in the rear. It looks very much like a military control room depicted in a thousand-and-one films. Different channel displays bring up current information for operators at 24 computer stations. From the control center communications are maintained with all departments concerned with emergency situations. Above the main floor glassed-in offices can accommodate everyone from federal agency representatives to media contacts. Every communication function in the building has built-in redundancy to protect against failure.

A floor below the control center, the Sheriff maintains the county’s 911 call center. It, too, resembles a war room. 16 horseshoe consoles house multiple phone lines where incoming calls are handled and resources are dispatched. The center averages about 36,000 calls a month. All calls are recorded. Maps pinpoint the location of the caller or incident. Here, again, communication installations are redundant.

Collier County coordinates emergency service operations with other counties, and there’s a lot of cross-fertilization. Residents and visitors are well served by these superb facilities and staff.