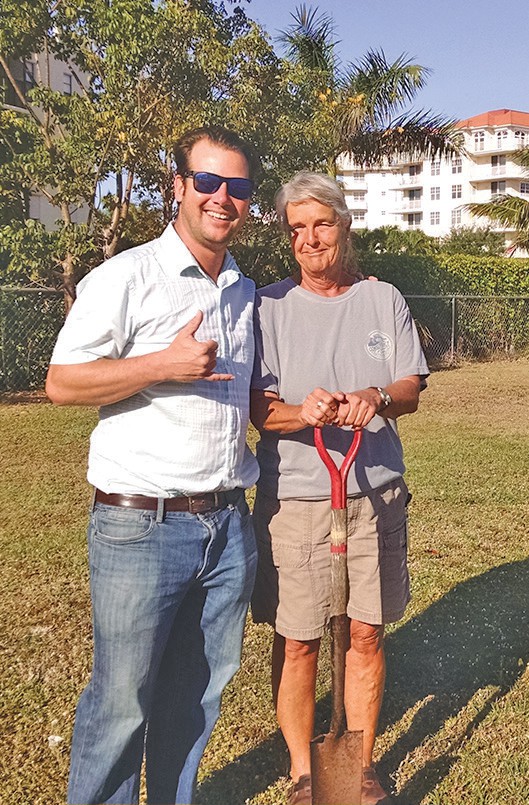 On Friday, April 14, Nancy Olson and I created four starter burrows near the public boat access in Caxambas Park. A male owl had been digging in a precarious spot, and the barrier meant to protect him was getting knocked down by cars trying to squeeze into a parking place.

There was ample open space near some picnic tables across the way, so I thought: Why not entice him over to a safer spot? I contacted Nancy Olson, our Regional Mansager for Collier County Parks & Rec., and she was excited to come and help.

Starter burrows are a simple and effective way to help burrowing owls cope with habitat loss, and homeowners are encouraged to dig one in their own front yard. To make a starter burrow in your yard, dig a hole at a 45-degree 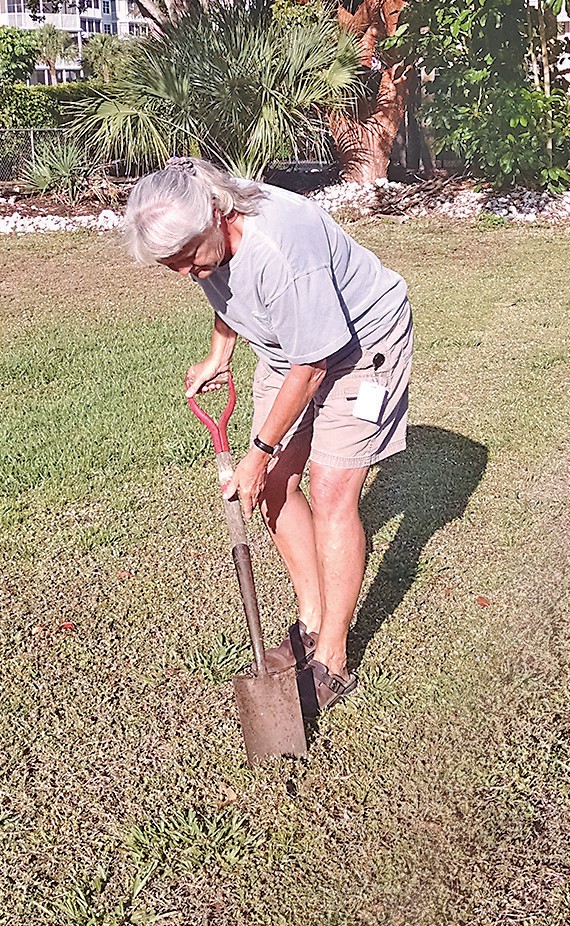 angle using a narrow shovel or hand trowel, and place a wooden T-perch near the entrance. There are no guarantees, but I had success with a burrow I dug near Winterberry Park. That starter is now filled with burrowing owl eggs about to hatch (if they haven’t already).

After our hard work at Caxambas, Nancy and I were happy when Audubon Owl Watch volunteer Dan Flaherty reported the male owl had begun digging in our starter burrows on the very first night! By the second day, Mr. Flaherty reported fresh sand and tracks at two of the four starter burrows. The two original burrows in the parking lot are still protected, but we are hopeful that he will take up permanent residence where he’s a bit safer from traffic.

The burrowing owl was recently listed as “threatened” by the 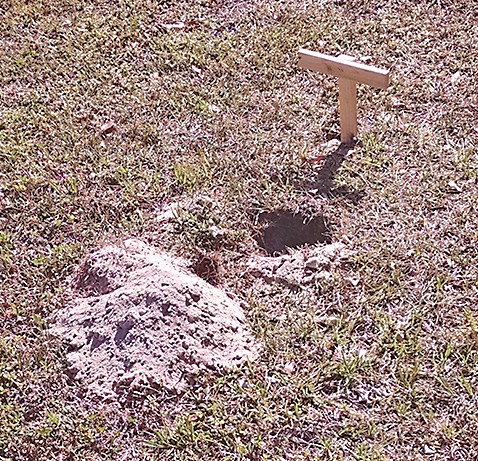 An example of a starter burrow.

Florida Fish & Wildlife Commission. It is one of the smallest owls in Florida. Their diet primarily consists of insects; however, the tiny raptors will also feed on snakes, frogs, small lizards, birds, and rodents.

Both burrowing owls and their burrows are protected by State statute, as well as City of Marco Island ordinances. Nesting season occurs between October and May, with March being the peak time for laying eggs. Females lay up to eight eggs within a one-week period, and they will incubate the eggs for up to twenty-eight days. The fluffy, down-covered owlets emerge from the burrow about two weeks after hatching, and fledge at about twelve weeks old.

If you see a new burrow that is not protected, please send an email to owlwatchmarco@gmail.com with the location.