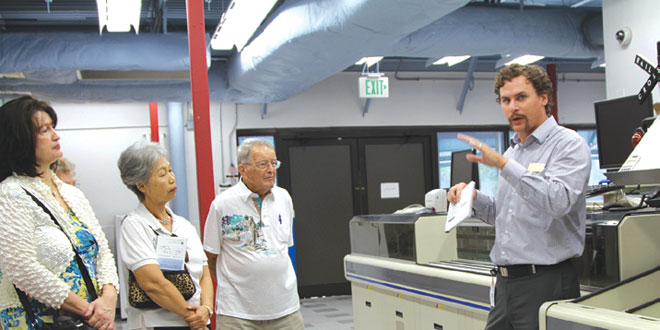 County Commissioner Donna Fiala offers residents several tours every year to various points of interest around town. Those attending the tours get a behind the scenes look at interesting facilities they may never otherwise see or learn about.

Places of interest visited in the past few years have included the Emergency Operations Center, the landfill, Treviso Bay, the parks system, the Children’s Museum and, just this past month, the Government Complex on the corner of Airport and Tamiami Trail.

The tour began in the elections office with a talk from Jennifer Edwards, Supervisor of Elections and her staff followed by a visit with Larry H. Ray, Collier County Tax Collector. Finally, seated in the Commissioner’s Chambers, attendees heard from Nick Casalanguida, Administrator of 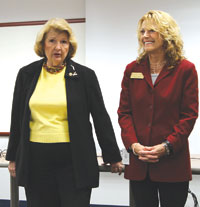 The elections office is completely supported by tax dollars and is based on the numbers of absentee voters and early voting. The office has effectively lowered the numbers of people going to the polls on election day, thereby allowing a reduction in the number of voting precincts from 62 to 58. Collier County had an 83% turnout in the 2012 general election, the highest number 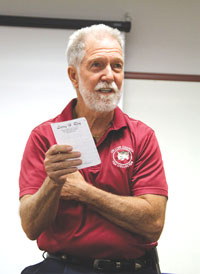 in the state. “We call ourselves the ‘Gatekeepers of Democracy,’” Edwards said. There are 182,000 voters in Collier County.

The tour saw some of the equipment which sorts the mail-in ballots, dating and time-stamping each as it is processed. A vast array of electronic equipment is used, including 145 scanners, 145 ballot boxes to 126 IVO’s machines, 225 EVID’s (electronic verifying ID’s machine), 24 BOD printers, 1200 voting booths and other support equipment is housed at a 3,250 sq. ft. facility. The tour group went on to meet the IT Department which makes it all run smoothly.

Larry H. Raywas up next. “A billion dollars passes through our hands; we don’t hold this money. We get your money according to the law and get it out. We 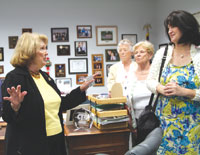 Donna speaks with guests in her office.

The tour went to show how the Tax Collector’s office processes tax payments. Larry Ray urged all tax payers to be sure to have the funds when you write the check because it is scanned and deposited right then. “Don’t postdate it,” he said. “I will have to send it

back to you which takes time and costs postage.”

The tour proceeded to Donna Fiala’s office and then to the Commissioner’s Chambers. Up next Nick Casalanguida. He said his department might not be able to give the answer someone wants to hear, but they are all about customer service. Further updates included a beach project, which has been in the news recently, is scheduled to be completed ahead of time. Logan Boulevard will go all the way to Bonita. Collier Boulevard North work will begin soon. Eventually, they would like to see 951 extend all the way up to the Southwest Regional Airport.

Leo Ochs, the County Manager, is the ‘go to guy’ according to Commissioner Fiala. “We go back 28 years. She is a sweet lady,

but has always done what is right for her constituents and gets her point across,” said Leo.

Leo compared his relationship with the commissioners and their duties as being similar to a large conglomerate. “I would be the CEO, the intermediary between the board and policy and getting it built or done.” As county manager, he has to act on the majority vote. “It can be easy if the vote is 5-0. Not always easy when it is 3-2. Each commissioner has a different group of constituents. What might be good for one commissioner might not be good for another’s constituency. Our job is to bring them a budget every year, get that budget approved.”

Ron Jamro, Museum Director, was the last to speak to the audience. 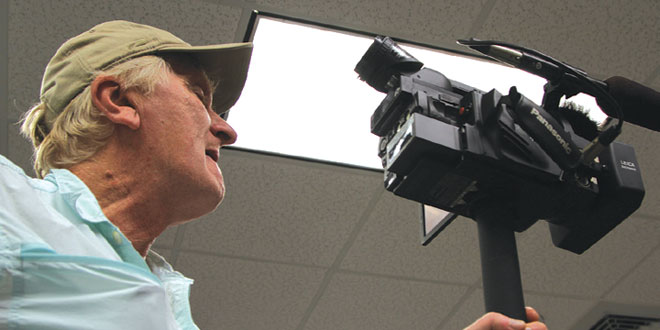 He urged everyone to take advantage of the opportunity to experience the historical and cultural significance of area museums. Each with unique exhibits and events. Informative brochures were handed to everyone.

The tour ended with a visit to Commissioner Fiala’s office. Donna moved to Collier County in 1974. “I just wanted to make a difference. I’ve been able to work well people and with help from everyone, we’ve made a lot of improvements. Whether it is Marco Island, Goodland, Capri or East Naples, I don’t want anyone to be overlooked and forgotten… I will take up that cross to make sure we are not forgotten.”

If you would like to know more about Commissioner Fiala’s tours, contact Alexandra Scardino at 239-252-8601 or e-mail donnafiala@colliergov.net. To view this tour in its entirety, go to MarcoIslandCommunityTelevision.com, courtesy of Bill Hughes, HughesVideoProductions.com.