College tennis: Is it possible to be too enthusiastic? 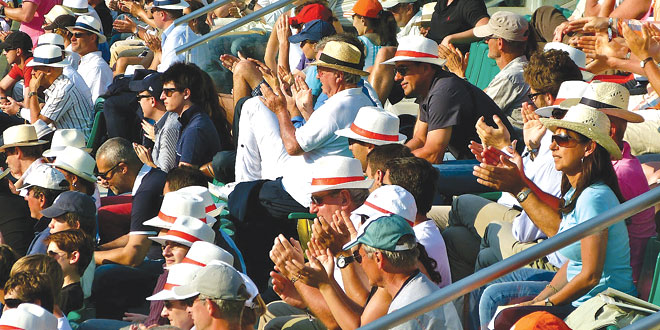 It would be difficult to come up with a better scenario… the old south, 75 degree weather with rich beautiful blue skies, no wind, track meet nearby, excited fans ready to watch two closely contested tennis teams ready to battle for the next three plus hours. Adding to the excitement, college tennis offers a unique scoring concept; three different doubles matches square off at the same time but each team will gain only one point toward victory.

In other words, the university or college who wins two out of the three matches wins just one point. During my tenure, we played three doubles matches and each one counted toward the final result, therefore one of the teams could be ahead 3-0 after doubles play and the matches, shortened to eight game pro sets offer pure adrenaline and fast play.

Now most kids are approximately 19-21 years of age with plenty of testosterone and emotional outbursts to add to the electric atmosphere. I see nothing wrong with teammates encouraging their buddies between points but there is a limit. So, when there is a stoppage and one views his teammate ripping a winner, it is fine to yell words of encouragement. However, there are always going to be a few overly enthusiastic kids veering over the line, screaming at the top of their lungs, “Go Cats,” which is not only annoying but inappropriate. Too often, guys are yelling as others are about to hit a serve or return and clearly will disrupt their concentration.

One cannot help but think of the PGA Golf Tour as officials carry signs that read, “Quiet Please,” as a player is about to tee off. Imagine if a fan screamed “Go Tiger,” right before he hit his ball? How many times have I witnessed a golfer, stop and walk away (he heard a sound in the distance) before he gathered his concentration to prepare to hit again? Whether we agree or disagree with the old golf and tennis rules, one must adhere to the idea of allowing the player to focus while striking the ball.

One particular kid was so obnoxious that a fan thought he had “Cats’ Tourette Syndrome” because at a moment’s notice he kept yelling his incessant mascot comments. Not only was he disruptive but more importantly he was not acting like a good sport. On the other side of the net, the players were totally under control and primarily attentive to their match. Occasionally, one of the competitors would encourage his teammate with a firm but polite, “great shot.” The home crowd was also respectful of their opponents and did not lower their standards and stoop to such antics. The coach of the home team has always stated that he wants to recruit “high character” young athletes. As they face adversity, he wants his young adults to be well-behaved, classy athletes on and off the tennis court. The coach is so adamant about well-mannered young athletes that each player on his team had to read Dr. Jim Loehr’s new book, “The Only Way to Win.”

It is Dr. Loehr’s contention that if the going gets tough and the athlete is truly tested, his true inner-self will come out. Therefore, it is essential for this group of young men to practice good behavior throughout the week before the match so it is engrained in their psyche. Despite the tacky behavior of this one team, there is something so special about watching college sports; amateurs giving their heart and soul on every point as they literally dive for balls to keep the point alive! If I could design my perfect scenario, at least 300-400 fans would line the courts as the crowd cheers on outstanding shot-making. The competitors on each court are running after every ball and uplifting one another. No one is using gamesmanship to alter the outcome of the match. The most important point I wish to convey is there is a delicate line between tasteful exuberance and boorish behavior.

Winning with class and dignity is the only way to go.