College Play Ahead for Lely Athletes 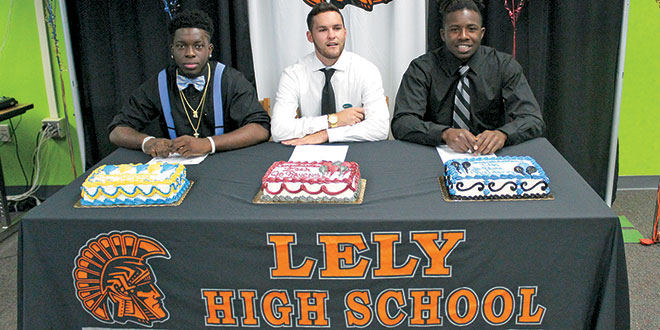 Cakes of various college colors adorned a table in the Lely High School Media Center as three of Lely’s own signed letters of intent to be college student athletes.

For Zach Gober of Lely it was a year in coming. Graduating in 2015, Gober spent the last year at DME Academy in Dayton Beach, improving his academics and basketball skills.

Its website boasts providing a world-class training facility for a variety of sports with an elite instructional team designed to help athletes excel in the student’s sport and education. It has local, national and international athletes of all ages attending.

“There were an awful lot of five-star athletes competing against the best of the best,” Gober said. “The coaches were good at getting the best out of everyone.”

He is going to Rosemont College, a Division III school in Rosemont, Pennsylvania. “I liked what the coaches had to say and think I will fit in well,” Gober said.

Dad Steve said, “He (Zach) worked on his basketball skills and academics. I think this is awesome. We’re very proud of him, but I will miss watching him play.”

Mom Shanon said, “It has been his dream for a long 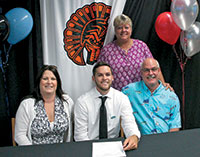 time. I am not glad to see him go, but he is ready for it. My new grandbaby will have to do.”

Estilien is going to Lindsey Wilson College in Columbia, Kentucky. It is a member of the National Association of Intercollegiate Athletics.

“There were a number of colleges that had interest in me, but when I visited the school I liked the coach and the team make up,” Estilien said. He expects to play as a point guard or on the wing.

Both players mentioned the coaching effort of Lely’s Fritz Jacques. Both played on the Lely team that made the Elite 8.

Germain is going to Allegheny College, a Division III school in Meadville, Pennsylvania.

“I expect to have great opportunities to help in the success of the team,” Germain said. “In talking with the coach, there was a great connection.”

He expects to play outside linebacker. Germain credited former Lely head coach Culmer St. Jean for the opportunity to play at the next level.

“He is the one that made me work hard,” Germain said. “This (signing) is amazing.”