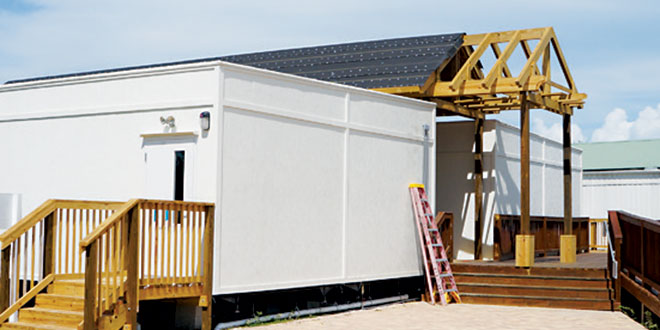 When Marco Island Academy opens its doors on Monday, August 17, students will be greeted by two brand-new science labs.

This year the young school reached full capacity with 250 students. To accommodate additional students, two modular classrooms have been added to the campus.

Keeping true to its STEM curriculum, the new modulars will be used as labs for chemistry/physics and biology classes.

Planning for the project began last September, when MIA’s board of directors examined the school’s needs and planned for future growth.

The addition of the two new modulars, build-out, infrastructure, interior and furnishings cost a total of $250,000. Most impressive, the school accomplished the project without incurring any additional debt. A push in MIA’s fundraising drive in the second semester of the 2014-2015 school year provided much of the funds.

But the project required more than just funds to accomplish. That’s when parents, board members and volunteers stepped in to help.

MIA parent and board member, Dave Fireman, is the chairman of the expansion committee. He worked throughout the year to coordinate the group of parents and community members who volunteered to help. Most of the committee members have a background in the construction business.

Jane Watt, school founder and board chair, tells us the project’s timely completion was driven by the tireless efforts of Stephanie and Barry Riordan,

MIA parents. Barry, who owns Island Construction, stepped in as project manager, and has been on-site daily to supervise and provide his expertise. His contribution has been instrumental in the project’s success.

Stephanie, who has extensive interior design experience, originally was asked to help with color choices. It evolved into much more, and Stephanie created a budget and timeline to keep the project on track. Stephanie says her goal was to “find the best quality possible- within budget.” The interior is top-of-the-line.

More help came from Dave Vergo, whose wife Dawn is on the school’s board of directors. Dave’s family business, Accurate Air Conditioning, gave him knowledge and insight into many of the project’s components, including technology and security. Dave’s thorough research helped find the brand-new modular units, and keep the project within the school’s budget.

Jane tells us she is grateful that there has been an “outpouring of help from the community in everything we do.”

MIA still needs eight more smart boards, at a cost of $2,000 each, for the classrooms. Donations may be sent to Tina Nash, Marco Island Academy, San Marco Road, Marco Island, FL 34145, or contact Tina at klnash@live.com. For more information on MIA, go to their website at www.marcoislandacademy.com, or call 239-393-5133.