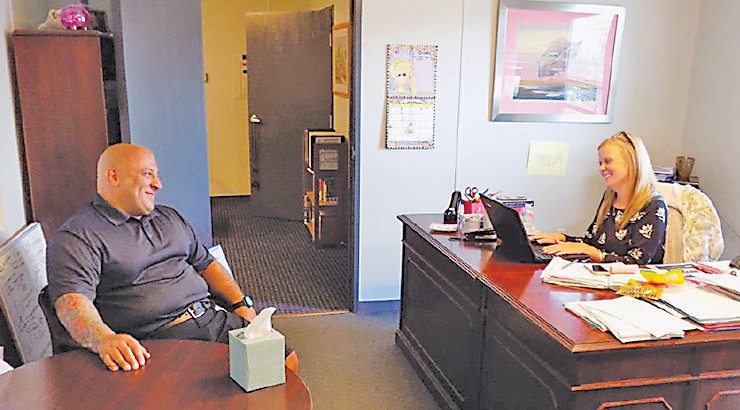 Coiro with Principal Melissa Scott. These two like each other and confer often. Coiro’s office, at rear, has a private entrance into the principal’s office.

its spectacular views of the Gulf. “It was as if they were family,” Coiro said. “They made us feel as if we belonged.” The next few days were spent taking inventory of the football equipment, a formidable task according to Monnot, visiting the gym (actually, the Marco Fitness Club, privately owned, and made available free of charge to MIA students – MIA has no gym of its own), and exploring the island. Now they were really hooked.

Coiro was taking over a team that, in their four years of existence, had never had a winning season. The MIA Rays went a combined 4 and 16 in 2012-2013, and 6 and 14 in 2014-2015. The season before Coiro took over, the team had slipped to 2 and 8. Coiro would try the philosophy that had worked so well at Grimsley High School, in Greensboro, North Carolina, where he took over a team that had won only one game the season before and improved the record every year of his tenure there. He views his main job as helping 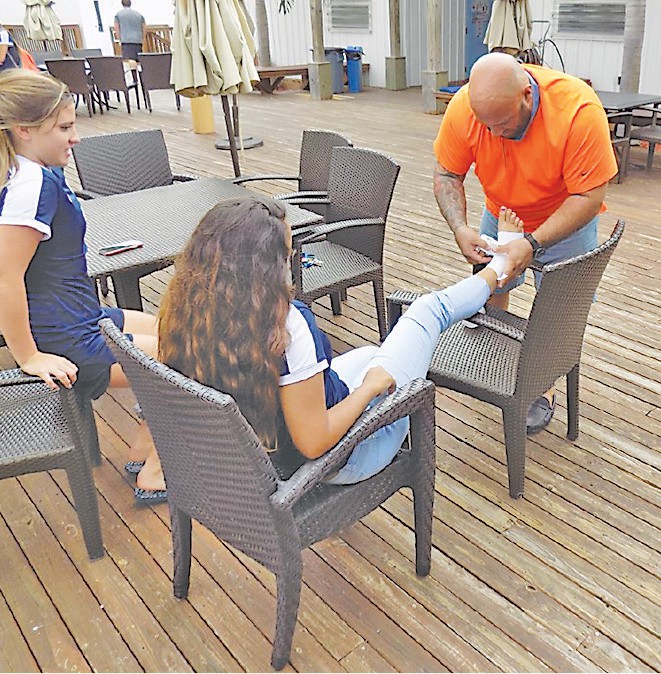 Coach Coiro was called out of a meeting with the author to do some emergency taping for the MIA girls soccer team before an afternoon away game.

the players to reach their maximum potential, a word he normally eschews. Put simply, what he really wants is their best effort, “not only on the field, but in the classroom, community, and in their personal lives.” “If I am getting that from them, than I am getting their all on the field,” he said.

At Grimsley, as at MIA last year (where he went 3 and 7), Coiro’s teams took an initial pounding while he was teaching his players and infusing them with his philosophy. He wants them to take pride in what they do. “Sometimes you will be good enough to win and sometimes you might not,” he tells them, “I ask only that you win with grace and lose with dignity.” In the big picture, these are the lessons that matter, Coiro says.

So how is he doing? Has he made a difference in the year that he has been here? Kelly Monnot, until recently MIA’s athletic director, certainly thinks so. She believes that Coach Coiro is playing a major role in changing the athletic 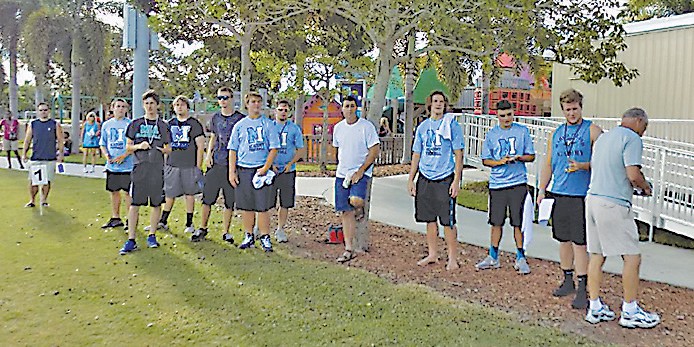 At dawn’s early light, MIA football players congregate, awaiting assignments to referee flag football games of over 100 kids. Giving up most of their Saturday mornings during fall, they know their coach will be there too.

culture within the school and in the community. “We are fortunate to have him as a role model and leader,” Monnot says, “He has instilled leadership, character, and selflessness, by demonstrating these traits himself. He has positively influenced all of our student athletes.” MIA Principal Melissa Scott leans heavily on Coiro and the two have clicked. “He is an awesome guy,” says Scott, “and my ‘partner in crime’. He has my back. His spirit and heart have helped change the culture of all our programs.” She has recently added Athletic Director and Activities Director to his portfolio, which also includes head football and track coach. As Activities Director, Coiro will be coordinating the students’ extracurricular activities throughout Marco Island. Residents and visitors will soon get a large dose of his energy and sunny disposition.

CJ Noel, an MIA senior left tackle, just might be Exhibit A for the impact Coach Coiro is having. Until this year, Noel was not interested in playing football for MIA and hadn’t played since the fifth grade. He did have friends on 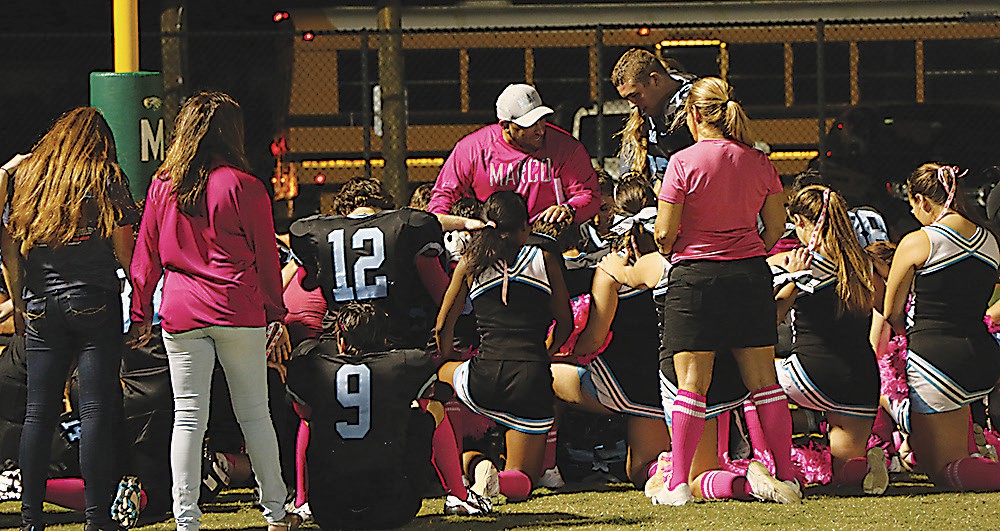 the team however, and they talked him into coming to some summer workouts at the Marco Fitness Center. Coiro conducts these workouts and CJ was impressed – so impressed that he started coming to practices and decided to join the team for the 2016 season. “Coach Coiro brought a sense of pride back into the school,” CJ said, “The team united behind him.” “Coach Coiro revived the team and helped us realize how much we enjoy playing the sport,” said Jeremiah Bohde, a junior middle linebacker, “He brought back the fun that came with playing football.” Senior Vinny Moller is grateful for Coiro’s mentorship. “Coach will meet with any of us 24/7,” says Moller, “He will meet you at school or at his house. He will even come to your house. He is as much a mentor as a coach. His heart is as big as he is.”

Coiro sends his players out into the Marco Island community to volunteer and make some friends at community events, such as A Taste of Marco, The Pet Parade, and 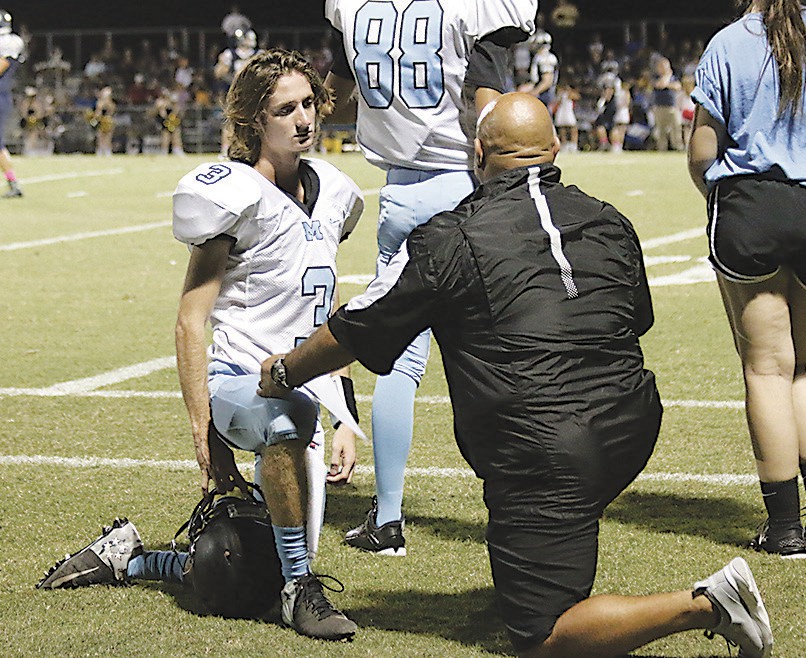 Coach Coiro kneels to offer encouragement to quarterback Matt Grille, who was having a rough night.

Meals of Hope. During the football season, he keeps them busy on Saturday mornings at Mackle Park, refereeing the Optimist Club’s flag football games. On Thursday afternoons, he makes sure some of his players show up to work the chains at the Marco Island Charter Middle School’s home football games. Coiro is working hard to build a special relationship with the Optimist football kids. “The youngsters need to be excited about MIA football,” he says, “Those guys are our lifeline.” He would also like to see a closer relationship with the middle school.

“Right now, we are not the most competitive program on the field,” says Coiro, “We are however servants to the community, with great academic skill [3.144 GPA – team average], each working daily to have great character and display selfdiscipline. That in itself will translate into wins on the scoreboard. In terms of changes, we will continue to do what we do. It is my goal to change the lives of all of our student athletes for the better, not just our football players.” As A.D., he just might do it.