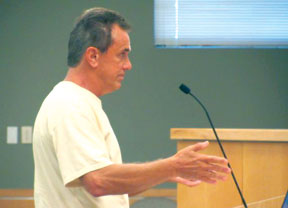 The Marco Island Code Enforcement Board met on Tuesday, October 9, to discuss mitigation of fines on several properties, and to discuss a stop-work order on at 531 Bald Eagle Drive,(formerly Glass of Marco).

Realtor Allen Duquet spoke on behalf of his client, Mr. Tran, who owns this commercial property. At the suggestion of Duquet, Tran had employed contractor John Miles of Collier Custom Building to clean and paint the property’s interior, and remodel it without a permit, to prepare it for sale. Miles, who was not present, had apparently informed both Duquet and Tran that a permit wasn’t necessary for the work he did, and that if one were necessary, he would obtain it before he continued with the rest of the work. Unknown to Tran, Miles was not licensed and he went above and beyond a simple cleaning job, repairing drywall and performing other repairs that according to city staff required a building permit. Duquet said he “assumed” Miles was licensed when he recommended him.

As the building space is currently being considered for purchase as medical offices, the board suggested that the case be continued at the December meeting, warning 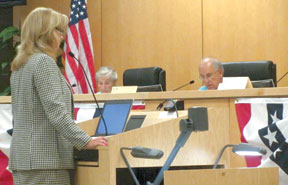 Attorney Diana Matson represented Chase Bank at the Code Enforcement Board, to mitigate fines on a property at 843 Perrine Court. SUBMITTED PHOTOS

Mr. Tran and Duquet to notify the new owner on closing of any potential problems with outstanding permitting issues.

Attorney Diana Matson appeared on behalf of Chase Bank, owners of a property at 843 Perrine Court. Fines of $89,300 had accrued over the years because of a deteriorating French drain and seawall. Since all other hard costs had been paid, the board voted unanimously, 6 – 0, to accept a reduced fine of $8,930 to be paid in 60 days, or the original fines would be reinstated.

The same property had a fine mediated to $3,331 for not connecting to the sewer, with the same conditions of paying in 60 days.

On behalf of the board Chairman Lou Prigge said he appreciated an institution like Chase Bank sending a representative with the authority to carry out the agreement.

Realtor Phyllis Gentile of Coldwell Banker appeared on behalf of a foreclosed property at 154 Hollyhock Court, that had not connected to the sewer for over three years. Gentile said a tenant had not vacated the property until July 9. Following that the bank had met compliance quickly. Fines of $272,250 were reduced to $12,890 with 30 days to 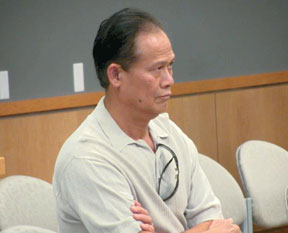 Mr. Tran owner of 531 Bald Eagle Drive. With his first investment property in the US, Tran was unaware the contractor recommended by realtor Allen Duquet had no license and did work on the premises that required a building permit

pay or the original fines would stand. The board voted 5-1, with Rony Joel voting against the decision.

Barbara Confer representing Coldwell Banker and Bank of America spoke on behalf of a home at 1994 Sheffield Court that had not connected to the sewer for over three years. Eager to mitigate fines, Confer said the house is under contract to close by the end of the month and she agreed to a payment of $1,180 to be paid in 30 days, or the original fines of $24,259 plus costs would become due.

A house at 813 Chestnut Court had accrued fines of $88,500 for a deteriorating French drain and illegal living space in the garage, in addition to other violations that the city had repaired. Realtor Diana Kelly said the house sale should be complete by the end of October and agreed to mitigation of $21,889 to be paid by 30 days or the original fines would apply. The board voted unanimously 6 – 0 to accept the decision.

The public is invited to attend the next meeting of the Code Enforcement Board which will be held on Tuesday, November 13 at 3 p.m. in the Community Room at City Hall.