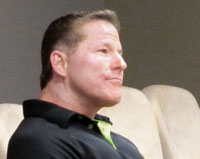 Greg Carlisle, owner of property at 1441 Butterfield Court, will have to reinstate a demo permit within 30 days or face heavy fines.

Marco’s Code Enforcement Board met on Tuesday, November 12 with only three cases on the agenda. Chairman Dick Adams questioned if perhaps the board could meet less often in the future, or “by appointment only” as cases that needed their attention arose. However, it was suggested that with the new landlord/tenant ordinances coming into effect and with the newly-structured Code Enforcement department now working three different shifts and on weekends under the police department, more cases might be forthcoming in the near future.

City council recently passed an ordinance changing the definition of a violator, whereby owners of rental properties would be held liable for their tenants’ infractions of laws such as those regarding excessive noise and proper property maintenance. Attorney Burt Saunders also advised that he will be lobbying the state legislature to enable changes to the city’s ordinances regarding short term rentals. It is hoped that these changes will improve conditions for homeowners who have had insufficient support in the past when filing complaints against irresponsible tenants.

No one was present to discuss a case against Michael Vale of 511 Sand Hill Court, for failing to connect to the sewer for several years. Vale has been apparently considering demolition of the structure on the direct access lot valued at $1.2 million, and the board unanimously agreed that Vale has had more than sufficient time to have made a decision. He was ordered to pay fines of $100 per day plus a $250 administration fee if the connection is not made within 30 days of the signing of the order. 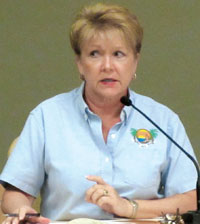 Liz Carr, Code Enforcement officer explains the ordinances regarding building permits to the board. PHOTOS BY CAROL GLASSMAN

Roque of 32 Gulfport Court was also charged with failure to connect to the sewer system. Board member Phil Kostelnik had mentioned the property previously, noting that approximately a year ago there had been an explosion and fire and the house looked “vacant and beyond repair”. He questioned the need for sewer connection at this time. Neighbor Ed Vesely, who lives across the street at 35 Gulfport, attended the meeting and reported he has been following the listing of the condemned home on an internet real estate site Zillow, and the sale price had recently been reduced $19,000 to $280,000. It is listed as “Fire damaged home… fixable with contractors bid of 297K to rehab the home… being sold at lot value… sewer assessment to be negotiated between buyer and seller.”

Code officer Liz Carr reported the city has a lien on the property, and another case is pending following expenses incurred by the city for restoring the exterior and making the property safe following the accident. Roque is said to be currently living with a relative and not fully recovered from injuries suffered during the fire. The board voted 5 – 2, to table this case indefinitely until a decision is made on some options: whether the building on the property is unsafe, will be demolished or a new owner will become responsible, or possibly until the other case is heard. A motion to begin fines for failure to connect to the sewer was defeated.

Greg Carlisle, owner of a property at 1441 Butterfield Court, appeared before the board to answer charges after complaints 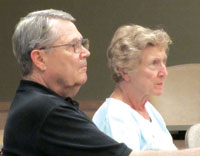 Mr. and Mrs. Ed Vesely, who live across the street from the abandoned home that burned after an explosion at at 32 Gulfport Court, are following its progress and hoping the neighborhoodeyesore will soon be resolved.

about construction debris, failure to maintain the property, and allowing building permits to expire before inspections were complete.

Carlisle assured the board that he had restored the property’s exterior to its former condition and that mowing is now being done regularly. Neither he nor the code board members seemed to understand until Officer Liz Carr explained in detail, that unless Carlisle restored or extended the demo permit, which would allow final interior inspections to be done, all the interior gutting and removal of the home’s kitchen, bathrooms and floor would have to be restored to their previous state. Carlisle stated he had made certain plans and arrangements with the former city building inspector, but since his departure things had been “in limbo” and he had not quite decided whether to continue to rebuild and renovate the house. He said the city’s new officials had told him he would need to change his plans before a building permit would be issued. The board agreed unanimously that Carlisle must make a decision about his plans for the property and pay some outstanding hard costs to the city for mowing. They allowed him 30 days to reinstate the permit, to allow for final inspections. If he has not met his obligations within this time he would be fined $100 per day and be charged a $250 administration fee. However, he was warned if the case comes back to the board he would be considered a repeat offender with fines escalating to $500 per day.

The next Code Board meeting will be held on Tuesday, December 10 at 3 p.m. at City Hall.