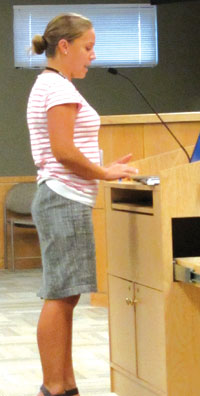 The City of Marco Island Code Enforcement Board met on Tuesday, September 10 at City Hall.

As Chairman Dick Adams had been absent at the August meeting, he asked for details about two cases involving Duane Thomas that had been removed. Adams pointed out that once a case is on the agenda it must be heard by the board.

Liz Carr, Chief Compliance Officer informed Adams that she had been advised, “The cases are not ready to bring forward and are in the Director’s (Bryan Milk’s) hands.”

Adams reminded everyone that it would be appropriate to “keep an eye on” the situation.

Under Old Business, the Board was to reconsider a case involving Mike and Michele Sullivan of 453 S. Heathwood Drive, for non-compliance in connecting to the sewer system in a timely manner. At the August meeting the Board had ignored comments Carr had made about there being illness in the family and had voted to give Sullivan 30 days to come into compliance, not the 90 day extension he had requested, and to pay fines of $250 per day plus administration fees of $250. Becoming aware of the hardship this family was facing, Coastal Breeze published an in-depth article in the previous issue.

Liz Carr introduced Lina Upham, Planning and Zoning Technician, Community Affairs to explain that in Carr’s absence an agreement had been reached with Sullivans through the public utility department to contract with a plumber, pull the permits, and bring the Sullivan house into compliance as of September 10. Monthly payments with eight percent interest will be added to the Sullivan’s water bill.

Carr apologized to the Code Board for possibly not going into sufficient detail on some of the serious medical issues the family was facing that might have earned their compassion. She requested that the Board waive the order for charging the $250 administration fee.

The Board voted unanimously to rescind the original order and Chairman Dick Adams explained the details to Sullivan, asking if he wished to comment.

“I don’t have too much to say,” Sullivan replied. “If you read the Coastal Breeze you’ll know what happened.”

Lina Upham then gave the Board details of a home at 923 N. Barfield, which is facing condemnation and demolition. City building inspectors have declared the structure unsafe and appraisals showed its worth to be approximately $17,000 while costs to bring it into compliance would be ten times its value. A mold inspection showed the premises to be dangerously uninhabitable.

City attorney Burt Saunders, who is working on the process to condemn and demolish, warned that it has to be done properly with sufficient due process and a hearing when evidence will be presented to the Code Board that shows sufficient justification for the action.

Carr said she had met with the owner, an elderly person who lives in Miami and cannot afford the demolition. The case will come before the Code Board in the near future.

A case involving 259 Fiji Court and the owner’s failure to connect to the sewer, resulted in the Board’s voting 5-1 (Lou Prigge dissenting) to charge the owners $250 per day if compliance isn’t met within 30 days plus $250 administration costs. As the house is in foreclosure and the current owners moved out, unable to pay for their utilities, Prigge said he felt it was unfair to expect them to pay the costs. However, the other board members had discussed the fact that once a bank takes over ownership and prepares the home for resale on September 18, the previous owners would not be involved in those costs.

Attorney Burt Saunders then gave a brief presentation, reminding everyone of several points of Sunshine Law. He began by telling the Board that not many reporters track members of the Code Board but there are certain rules of which they should be aware. He pointed out a recent case involving a city council in Orlando where members were texting each other during a meeting and had then deleted the texts. This was considered destruction of public records, which could have severe consequences in Florida. Saunders advised all to avoid creating public records, to deal directly with city staff, and if e-mail or a text is necessary, to file a copy with the city at the same time.

He also advised members about not discussing Code cases anywhere but at a meeting. He said again, that it wasn’t likely that Code Board members would be stalked by the press if, for example, they were meeting for coffee. He said it was more likely to attract suspicion if two or more City Council members did the same thing and one should be aware at all times of how actions would look to an observer.

Just before the meeting was adjourned, Liz Carr introduced Al Greco, the new Code Enforcement officer who had formerly worked in the city’s Public Works department.

The next Code Enforcement meeting will be held at 3 p.m. on Tuesday, October 8 at City Hall. The public is welcome to attend.