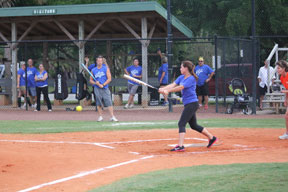 Kretch’s Defeated Snook Inn 20 to 10., Jon Wright had 5 hits including 3 doubles, Brece Kretschmer had 4 hits with two doubles and Ellen Kretschmer and Julie Mann’s each had two hits.  Ricky Hart led Snook Inn with three hits and Ray Unsderfer added two with a grand slam in the bottom of the 6th.

Week two saw Stan’s Buzzard crew jump out ahead of 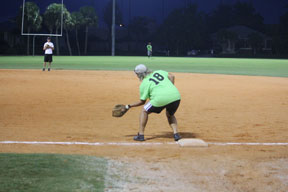 the  Snook Inn early on and never looked back winning  9 to 3 in the first game of the night. Stan’s was led by Josh Harris, Lee Vanderjagt and Jason Berning each with doubles, and Carrie Bamberger, Trish Ohler with singles.

The second game of the night saw something that had not happened all of last spring, Rookies was defeated by Kretch’s 7 to 6. Rookies down by 4 going into the last inning scored 4 runs to tie the game. 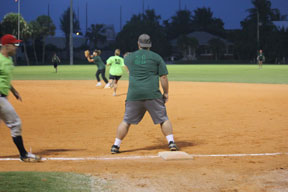 last at bats finally handed Rookies a loss when Bruce Kretschmer crossed the plate on Christian Polanco base hit.

Co-Ed Softball is played every Monday night at 6:15 and 7:30 at Winterberry Park.

There will be a coach’s meeting for anyone interested in entering a team in the Fall Adult Softball League that begins in November.  The meeting will be Tuesday October 2nd at 5pm at Mackle Park, contact Alex Galiana at 239-389-5196 for more information.