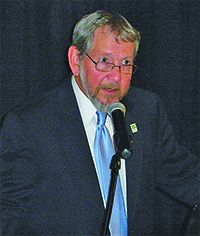 William Marquardt asked his audience to engage in visualization at the outset of his lecture on Calusa Indians who once dominated southern Florida, from coast to coast.

“Just imagine for a minute the villages that were here on Marco Island,” he said before asking them to conjure images of cooking fires, canoes and their occupants returning home and fishing nets being expertly tossed into nearby waters teeming with the shellfish and fish that were Calusa dietary staples.

Marquardt reminded everyone to remember that the primary difference between these indigenous peoples and us isn’t intelligence, but only the times in which we live.

“These were real people, with a functioning society, belief system and history,” he said during his recent presentation at Rose History Auditorium before members and guests of the Marco Island Historical Society.

Entitled “Calusa Connection: Recent Research and New Surprises,” the lecture reviewed information about the tribe’s lifestyle and practices learned since 2013, as well the latest discoveries made at Mound Key and the Pineland shell mounds in Lee County. Those findings include information on the connection between those archaeological sites and South Florida’s other Indian tribes.

Once numbering as many as 10,000 people, the Calusa lived in Southwest Florida, but controlled an empire that stretched across the state’s southern tip for many centuries, before fading away in the 1700s. Spanish explorers gave them the name “Calusa,” a native word they understood to mean “fierce and warlike,” in the early 1500s.

Calusa culture included huge shell mounds, engineered canals and an ability to sustain its population largely by the fish and shellfish found in the estuaries west and south of Fort Myers. Mound Key and Pineland are but two of the remaining shell mound sites between Charlotte Harbor and the Ten Thousand Islands that are still in existence and being studied today.

Marquardt is an anthropologist, researcher and University of Florida anthropology professor who has studied the Calusa for 25 years. He is curator of the Archaeological and Ethnographic Collections at the Florida Museum of Natural History, located on the University of Florida campus in Gainesville. He also directs of the university’s Institute of Archaeology and Paleoenvironmental Studies.

He is also the founder and director of Pine Island’s Randell Research Center, a permanent facility dedicated to learning and teaching Southwest Florida’s archaeology, history and ecology.

In his roughly one-hour lecture, Marquardt began with an overview of Calusa history, focusing on their interaction with the Spanish explorers whose travels to Florida in search of riches and slaves ultimately led to European settlement.

The explorer first sailed to the St. Augustine area from Hispaniola, but didn’t land, and then proceeded to the Miami area, said Marquardt. From there, de Leon’s ship was transported by the powerful Gulf Stream, abound Florida’s southern tip, and deposited in the area near Sanibel and the mouth of the Caloosahatchee River.

After landing to make repairs to the vessel and resupply, the sailors, for the first time, encountered the Calusa, who’d sent a small party to trade with them. But the Spanish took four Calusa women prisoner, which resulted in the Indians sending reinforcements. Violence ensued, resulting in deaths on both sides.

De Leon then returned to Hispaniola, present day Haiti and the Dominican Republic, where he reported that the Indians spoke Spanish, probably because of previous Spanish attempts to enslave Calusa and the fact some Cuban Indians had escaped the island and found refuge in South Florida. Marquardt said de Leon returned to this area in 1521, but was repulsed by the Calusa and he died in Cuba after those battles.

The Calusa controlled the entirety of South Florida through a patronage system and that they traded throughout the state and into other parts of the American Southeast, he said.

Marquardt has been involved in archeological digs at Pineland and on Mound Key, located in the Estero Bay, along with Mike Savarese, a marine science and environmental studies professor at Florida Gulf Coast University, faculty from the University of Georgia, students and volunteers.

Among the discoveries of the last 30 years is the location of the Calusa’s capital, known as “Calos,” on Mound Key, located in Estero Bay, he said.

The presence of 16th Century Spanish artifacts and technological advances, such as ground penetrating radar, have enabled researchers to confirm Calos’ existence on the island and that it once contained a round building large enough to contain 2,000 people. The island later became the site of the first Jesuit mission in North America.

Another discovery is the fact the Calusa evidently built “water courts,” large enclosed areas on both sides of the mouth of Mound Key’s great canal, to store fish and shellfish for consumption when times were lean.

The water courts were large and built about 1200 A.D., with large earthen ovens situated nearby, said Marquardt.

He said the Pineland and Mound Key digs have both involved excavating below sea level and provided rich evidence of Calusa culture.

“All have very well preserved deposits at the bottom,” Marquardt added.