Class in Session New MIA coach holds class, but grades for him to come 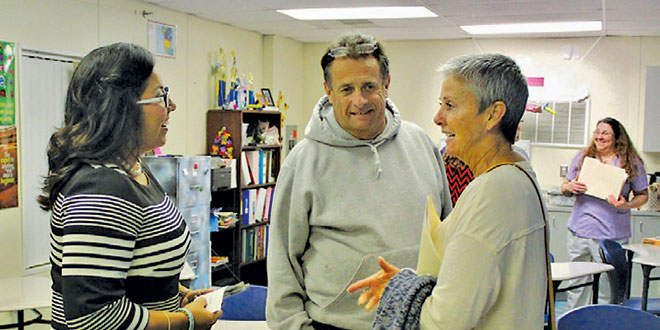 Class was in session for mostly parents of Marco Island Academy (MIA) football players on January 21 at MIA.

Coiro voiced philosophies he learned from being an assistant college coach, displaying charts on the program’s mission: faith and family, program principles of scholarship, sustained level of success, leadership and character.

A lengthy player-coach agreement was discussed that tied in the principles that will allow player, family and community to share in the school’s success.

Parents easily doubled the number of players in the classroom, as players had been with their new coach during the day.

“I’m here to serve the children and the families,” he said.

Next year’s team will have stickers on their helmets like college teams, but based on grades, community service and on the field play. “I will coach life and football,” Coiro said. “Championship doesn’t always have to be on the 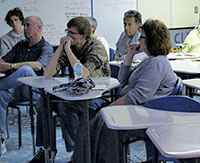 Class was in session for mostly parents as Damon Coiro, new MIA football coach, spoke to them on Jan. 21.

field, it can be in the classroom. Scholarship is key, football is a benefit.”

He spoke about weight training being a key part of being a football player, but more so for preventing injuries. He also encouraged players to compete in other sports.

With a team that went 2-8 last season, he spoke of the team as the foundation of building the football program. And finishing.

When it comes to competition, “we finish what we start while supporting individualism,” he said.

Coiro plans on keeping assistant coach Win Hedley, a former college coach. “I will interview others, but I expect I will be making a fresh start with the staff,” he said.

Mike and Maureen Grille, parents of son Matt, who will be a senior, look ahead. “We expect good things from the coach,” Mike Grille said. 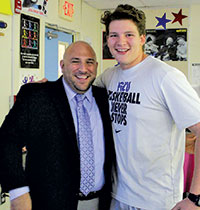 Class was in session for mostly parents as Damon Coiro, new MIA football coach, spoke to them on Jan. 21. PHOTOS BY ROGER LALONDE

“A big problem has been manpower. By the end of the season having to play both ways is a problem.”

Key starters from last season will be gone, including junior quarterback Andrew Fowler. He led the area in stats for pass completions and touchdowns. He will go wherever dad Greg goes. Greg resigned a month ago as head coach and expects to be teaching at another school. He has not ruled out a coaching position elsewhere.

Coiro understands what lies ahead. MIA fans are yearning for a respectable, winning season, something they thought would happen last year. Patience was his offering to the question. “It takes time, but I expect we will hold our own,” he said.

Coiro’s wife Victoria attended, and was an efficient assistant in getting out the pages of information on how her husband’s goals will lead to success.

There was no final grade for the parents in the class. Coiro will start being graded when MIA plays its spring game.