CJ’s Gives Back at Birthday Bash 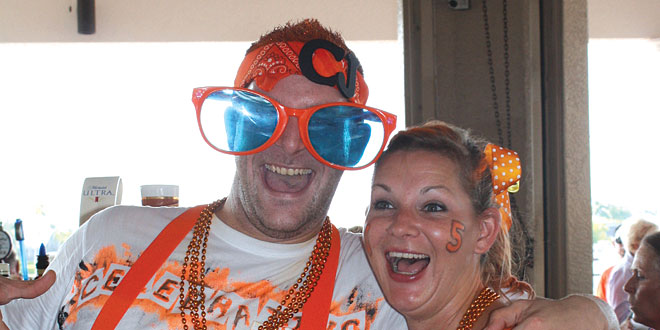 CJ’s on the Bay at the Esplanade celebrated its fifth birthday with a splash.

On Sunday, September 22, the restaurant that many have come to know and love gave back to its patrons by throwing a party to remember. Live music by Jenny Woodman and Trevor Earl carried on throughout the celebration, which ran from noon to 6 PM. Patrons wore their favorite CJ’s gear as did employees.

“We are very fortunate

to be able to give back to the island, and we try to do so as much as possible,” said Kurt Koon, as he stood with his wife Jacquie, owners of CJ’s on the Bay.

“Five years ago, when we took over from the previous owner, we had 46 employees. Right now we have 80 employees, and by the way, we’re hiring,!“ added Jacquie. “Of the 80 employees that are with us today, nine 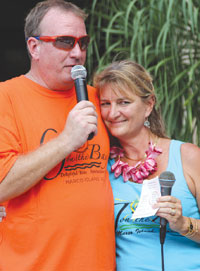 Kurt and Jacquie Koontook turns expressing their gratitude to both staff and patrons. PHOTO BY VAL SIMON

of them have been with us since the beginning. To all my CJ’s “kids,” thank you very much. We love you, and we do consider you our family. And to everyone here, thank you!”

Sally Richardson who has worked for the Koon’s since the beginning, described her bosses as amazing and such nice people. Sally is one of nine employees, including Chef Laura Owen, who has been with CJ’s since the very beginning. Since 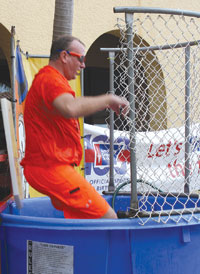 then, many of the employees that have come onboard have stayed for the same reason. Employees even got into the spirit of the celebration, sporting stylish CJ’s gear for the “Best Dressed Employee Contest.”

Many different groups and clubs throughout Marco, including Kiwanis, Rotary, Christmas Island Style and CAMMI, have been holding events at CJ’s for as long as it’s been open. Fund raisers, luncheons and social gatherings are held throughout the year at 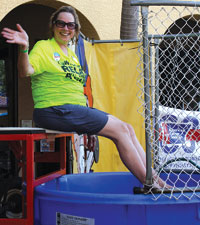 ACS Executive Director Lisa Honig waves as she awaits another dunk into the ice cold water.

the restaurant that has garnered an excellent reputation under the Koon’s ownership.

The Koon’s certainly expressed their gratitude with Happy Hour prices all day long, food specials by Chef Laura, popcorn, a 50/50 raffle and, best of all, a dunk tank. The Koon’s weren’t shy about stepping up to the plate for their turn to be dunked. And they were happy to let their employees take aim! 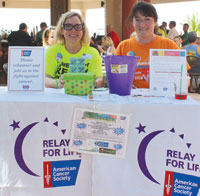 Lisa Honig and Sue Olszak of the Marco Unit of the American Cancer Society held a 50/50 raffle, offered popcorn and even joined in on the dunk tank action.

the American Cancer Society to the event, where the 50/50 raffle was donated to the ACS. Executive Director Lisa Honig even took her turn in the dunk tank as a thank you to those who offered donations in the name of cancer awareness.

The Fabulous Five Birthday Bash was much more about giving back to the community for the Koon’s. Their statements of gratitude coincided perfectly with the restaurant’s slogan. The celebration certainly proved that CJ’s on the Bay is “The Heart of the Rock.”