This week marked the 70th anniversary of the founding by Congress of the Civil Air Patrol. Seventy years ago civilian pilots from across the country signed up to perform their own homeland security in the air. Civil Air Patrol began on December 1, 1941 and it quickly became involved in combat operations off the Atlantic and Gulf Coast.

After signing up, these pilots and crews went east to one of the Coastal Patrol Bases to perform a very hazardous form of flying. One such pilot who signed up back in December 1941, just days before the Japanese attack on the Hawaiian naval base Pearl Harbor said: “At the time, everybody knew we were going to wind up being in the war. The question was probably when, not if,”

Within weeks of the U. S. involvement in World War II, German submarines began sinking vital shipping within sight of Americans standing off the East Coast.

Because the military lacked the necessary ships and aircraft to respond and the attacks were so numerous and successful, the entire early war effort was threatened. At the insistence of the oil industry, the military decided to use CAP’s civilian assistance as an experiment.

And what a successful experiment it was, for CAP was ultimately credited with sinking two German submarines, attacking 57, and reporting 173 to the military. In addition, CAP found 325 survivors of submarine attacks. CAP also performed other vital missions such as search and rescue, border patrol, forest fire patrol, target towing, courier/cargo flights, and other essential tasks.

The reason the Civil Air Patrol, known at the time as the Coastal Patrol, was created was twofold.

First, aviation enthusiasts saw that war was looming, and they felt as soon as it did break out that aircraft would be grounded 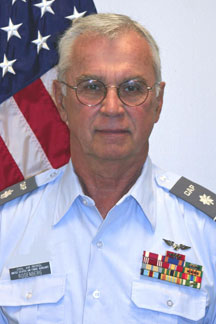 in the United States. Those pilots’ concerns were correct. Six days after the attack on Pearl Harbor all civilian flying was canceled in the United States. If a private plane did not have a use to help the government, the owner was required to remove its wings and hang it up for the duration.

Second, pilots who were most likely too old to be a part of the Army, saw this as an opportunity to serve their country. Civilian pilots, whose private planes were painted yellow, were dispatched primarily to the East Coast to search for German submarines. Amazingly, they actually did sink a submarine. In all, 90 CAP planes were forced to ditch at sea. Of the 59 CAP pilots killed during World War II, 26 were lost while on coastal patrol duty, and seven others were seriously injured while carrying out the missions.

The actions of other pilots who flew back then are heralded as aviation pioneers and national heroes.

“These members from our earliest days as an organization helped save lives and preserve our nation’s freedom,” said Maj. Gen. Chuck Carr, CAP’s national commander. “They were truly unsung heroes of the war, using their small private aircraft to search for enemy submarines close to America’s shores, towing targets for military practice, transporting critical supplies within the country and conducting general airborne reconnaissance. They provided selfless service, without fanfare, in defense of their homeland.”

Since the end of World War II, CAP has become a valuable civilian uniformed volunteer public service organization chartered by Congress. It is now an auxiliary of the U. S. Air Force, charged with providing essential emergency, operational and public services to communities and states nationwide, the federal government and the military.

Legislation has been introduced that would award

the civilian group a Congressional Gold Medal for its World War II service.

“Our Marco squadron is also very proud of our cadet programs that we offer to youngsters ages 12-18,” explained Squadron Commander Lt Col Ray Rosenberg. “Our cadets are prepared to become citizens ready to become leaders in college, the military, and in civilian life.”

“We encourage our members to practice these principles while participating in Civil Air Patrol activities and also in their own lives,” added Lt Col Rosenberg.

The seniors of the Marco Island Composite Squadron meet the first and third Monday of each month in the CAP hangar at the Marco Island Executive Airport, end of Mainsail Drive off Route 951(Collier Blvd). The cadets meet every Saturday morning.

Civil Air Patrol, the official auxiliary of the U.S. Air Force, is a nonprofit organization with over 60,000 members nationwide. CAP performs over 90 percent of continental U.S. inland search and rescue missions as tasked by the Air Force Rescue Coordination Center and was credited by the AFRCC with saving 113 lives in fiscal year 2010. Its volunteers also perform homeland security, disaster relief and counter-drug missions at the request of federal, state, and local agencies. The members play a leading role in aerospace education and serve as mentors to the more than 23,000 young people currently participating in CAP cadet programs. CAP has been performing missions for America for 70 years. For more information on CAP, visit www.gocivilairpatrol.com