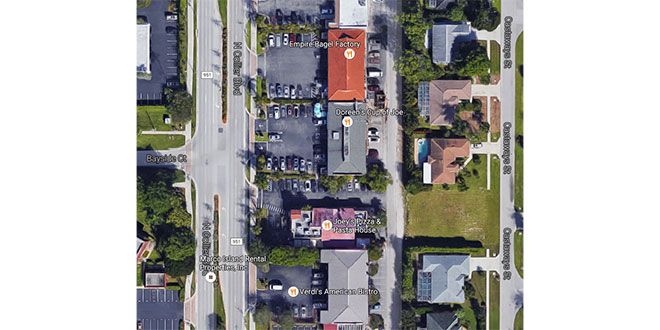 Both the Marco Island Planning Board and the City Council will have busy agendas starting on Friday, September 2 as the Planning Board undertakes a review of a proposal from Joe Oliverio regarding a remark of the three properties he presently owns and a request to redo the alleyway behind those businesses.

That meeting will convene in council chambers at 9 AM on Friday, September 2.

Mr. Oliverio now owns the properties that consist of 257, 267 and 277 North Collier Boulevard. These properties include the laundromat, Make a Memory and Empire Bagels located at 277 N. Collier, Doreen’s Cup of Joe at 267 and Joey’s Pizza at 257 N. Collier.

Mr. Oliverio is also proposing to erect, at his expense, a PVC barrier on the east side of what is known as Durnford Way, the alley which runs directly behind the properties at 257, 267 and 277 North Collier Boulevard. This would provide a protective barrier between the residential properties on Castaways Street which border the Durnford Alleyway and the commercial properties owned by Oliverio. This would also add parallel parking on the east side of the alleyway, something that is now prohibited.

Presentation on Hotel at Park and Elkcam

A much-awaited presentation from Small Brothers Marco LLC regarding the building of a 165-room hotel with restaurant on two parcels of land which abut Elkcam Circle and Park Avenue will come before the board. They are requesting a rezoning of the parcels from C-4 zoning to a PUD (Planned Unit Development) to facilitate that project.

As part of their presentation to the board, the developer will be discussing an investment in Veterans Community Park, which will encompass many of the upgrades that citizens have been discussing over the last several years.

“There is a lot of confusion regarding our proposal,” said Patrick Neale, the attorney for Small Brothers. “We only wish to build the hotel on the parcels not connected to the park, but are willing to make the financial investment to provide the community with the upgrades to the Veterans Community Park that the city has been discussing. It is in our best interest to have a vibrant and beautiful public park adjacent to the major investment we are willing to make next door,” said Neale in an interview with the Coastal Breeze News.

Small Brothers is willing to foot the expense for improving public parking around the park. These spaces would not be for the hotel’s use. They are also proposing to finance the construction of a much discussed “band shell” and a restroom/concession area, which was another item favored in public hearings over the last year.

In addition to those amenities, the developer would construct other improvements such as walking paths, lighting and seating areas throughout the park, while maintaining the green space that residents have said they desire.

A docking area against the seawall abutting the park is also being considered. This dock area would allow boaters to tie up and attend functions within the park.

Another issue which is sure to be discussed is the matter of density credits which would allow the additional rooms at the hotel to make it financially feasible.

Many of the items that will be discussed in the weeks ahead are sure to be related to the Mid-Town Overlay District that was originally discussed in 2010 that envisioned some of the enhancements that this development might bring with it.

The plans are conceptual in nature and would require the input from the Planning Board and the Parks and Recreation Advisory Board before coming before the city council for final approval.

The plans have generated considerable discussion within the community, with residents in the Joy Circle area concerned about the impact on their neighborhood.

Because of the Labor Day holiday falling on the first Monday of the month, council will convene at 5:30 PM on Tuesday, September 6 in chambers to discuss several items.

The board will take up the first reading of the ordinance setting the budget for the 2016-17 fiscal year. A second reading of that ordinance and final approval will be held on the September 19th meeting of the board.

Council could lower the rate further, but would have to indicate what city services would be reduced or eliminated.

A plan for an off-site parking arrangement that would allow Pinchers Crab Shack to open at the intersection of Winterberry and South Collier is also before council for approval. That location formerly housed O’Donoghue’s Irish Pub prior to its closing in the Marco Walk Plaza.

Council will also have before it a modified Utility Schedule, which would provide for a COLA Rate Adjustment per the requirements of the bond covenants. Those covenants require the city to increase rates 2.20% to satisfy the need to provide adequate operational expenses and income to satisfy bond payments. That rate adjustment will maintain adherence to the bond covenants adopted in 2013.

City Manager Roger Hernstadt will also update council on negotiations for a potential savings on the refinancing of utility bonds. That plan has the potential of saving $200,000 per year for ratepayers by doing a strategic refinancing of some bonds. Hernstadt’s plan has a long-range savings potential of approximately $4,000,000 to ratepayers over the term of the bonds.

For updates on any of these items during the week and other breaking news, please go to www.coastalbreezenews.com for your up-to-date information for Marco Island.