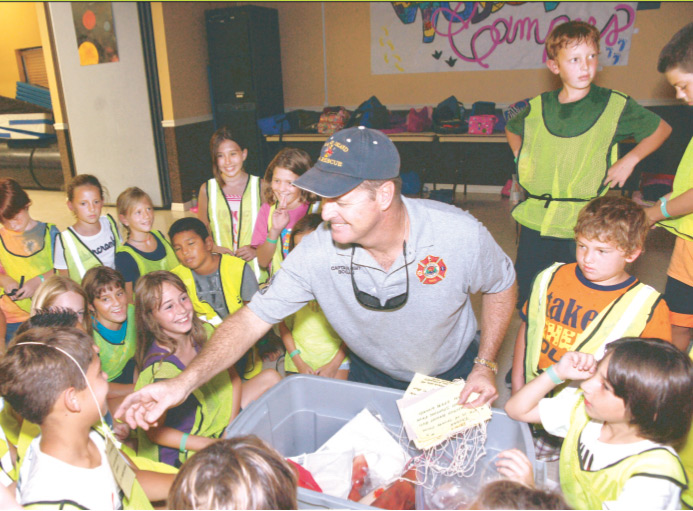 The scene at Mackle Park on August 18th looked as if a mini-tornado had just come through. Debris littered the areas surrounding the basketball hoops. There were injured victims everywhere and fires had started at two different locations. Power lines were down and a victim was even found in a tree. This scene was the perfect scenario for the Marco Island Fire Department’s CERT training exercise. Approximately 30 city employees received certificates as Certified Emergency Response Team (CERT) members after the successful completion of this training exercise.

To become a CERT member, one must take a 16-hour training course spread out into four sessions one time per week. Any civilian may take the course offered through the Marco Island Fire

Station. In fact, there are 82 civilians trained on Marco Island through this same class. This particular course, however, contained all city employees. It is the third CERT class for city employees so far and the classes won’t stop until all who work for the City of Marco Island have completed the course.

City Manager, Jim Riviere, completed the course a few years ago and realized its significance. When he became City Manager he expressed his desire to have all city employees become CERT certified. “I don’t think there’s anything better you can do for your community. We are a target area for natural disasters, but this can also be useful in a situation such as a fender bender.”

“City employees have job responsibilities during any kind of event such as this. This program trains them in case they come across an emergency situation while performing their set tasks.”

New CERT trainees,   were not the only ones to take part in the training exercise at Mackle Park. Local kids from Camp Mackle were also involved in the exercise that put the classroom-taught skills of each CERT member to the test. Draped in yellow vests and wearing signs around their necks that stated their specific injuries, the kids of Camp Mackle played their roles as victims flawlessly. Many of the children wore fake injuries on their arms, legs, hands and stomachs to portray different types of injuries the CERT members must address. The children were very excited, pointing out their fake wounds to

their friends. Kayla Johnson of Camp Mackle explained, “I have to be dizzy and I also have a broken leg. This is good for me because I can act too.” Christian Vazquez was also excited to showcase his “broken arm” calling it “cool.”

The kids were scattered about the area around the basketball hoops and as the Certified Emergency Response Team arrived, the acting by the children began. Moans and wails could be heard as Kayla and her friends proved what great actors they were.

The team, all wearing orange vests, green backpacks and green hard hats, immediately assessed the situation. They divided into teams of four in order to break up responsibilities. A staging area was set up as well as a triage area.

Others went out into the field to assess the situation of the wounded. Those with injuries were brought to the triage station and were labeled red, yellow or green. Red being the most severely injured, yellow being moderate injuries and green being very minor injuries. Those labeled green may actually be asked by a CERT member to help aid other victims. Those who were deceased were not to be touched and to be left where they had been found. The acting by the “deceased” children was excellent, given they laid still throughout the whole thirty-minute exercise. The team also had to put out two fires, handle hazardous material and deal with downed electric lines on the ground as well as over a vehicle.

Overall, the set-up was a success and there were minimal “fatalities.” After

the exercise, the group discussed what went well and what could have been improved upon with their teachers. Steve Fickling, Jim Mee and Chris Crossan, all members of the Marco Island Fire Department, led the event and were also the instructors for the course. City Council Chairman, Jerry Gibson, was also in attendance, handing out certificates to graduates during a ceremony after the group exercise.

Those who participated in the CERT program had positive reactions to their training. City Building Inspector, Gary Konicek, expressed that the amount of information learned seemed very valuable. However, “you never know how it will be in a real life emergency situation.” One trained CERT member from a previous class already knows that feeling. As Police Chief, Mike Murphy,

explained, “A public works employee came across a car accident and was able to use his kit and the knowledge he learned in class to help in the situation.” Fireman and instructor, Steve Fickling, explained further that the specific CERT trainee had just come from a class when the accident occurred. The individual was extremely excited that they knew what to do in that type of emergency.

The Marco Island Fire Department will continue to offer CERT classes to city employees as well as civilians. The next class is scheduled for some time in the fall. To find out how to enroll, you may call the Marco Island Fire Department at 239-389-5040, or visit the city’s website, www.cityofmarcoisland.com. Information can be found at the fire rescue department page listed under the Government section.