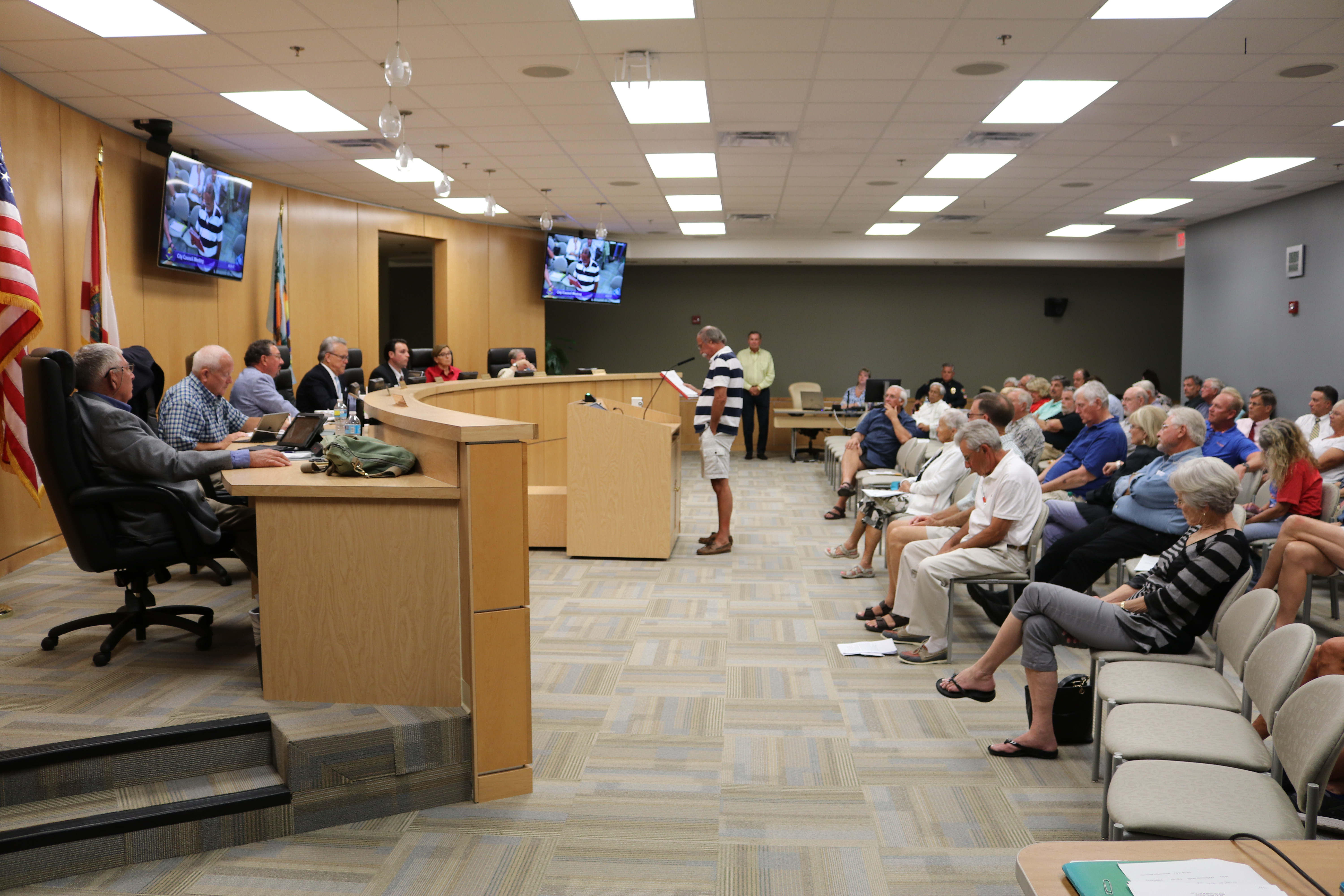 For members of the Marco Island City Council the evening was somewhat uncomfortable as a number of residents came forward to question their decisions on circumstances surrounding the departure of City Manager Roger Hernstadt. At the February 6th meeting of council, Hernstadt’s letter of resignation was read into the record by City Attorney Alan Gabriel. That resignation was to be effective July 7, 2017 as per the stipulations of the contract between the city and Hernstadt.

That immediate departure would have still required the city to pay the former manager as called for in his contract under the provisions for notice and severance clauses. As part of that early departure option that Hernstadt had offered to the city he would have received his pay and benefit package through July 7th and he further requested that council cover his benefit package for insurance until the end of the year in addition to retaining his Apple iPad. In consideration of that he would remain available through the end of the year to be consulted with on city business.

Even before the discussions regarding the severance agreement several residents came forward to voice their displeasure with the council’s treatment of Hernstadt during the citizens comment portion of the meeting.

Ray McChesney came forward to remind councilors of their commitments to the public during the election and referred to those that voted to oust Hernstadt as the “Gang of 5,” as he expressed anger and frustration with their actions.

Tom Fisher came forward to complain regarding the manner in which council had chosen to proceed regarding the Hernstadt issue. “Four councilors ran for office as a slate to bring transparency, sunshine and openness to the council.  To step out of the shadows, a fresh start and a professional and effective government. The gag order of February 6 goes against any of your campaign promises. I now have second thoughts regarding the integrity of our city council,” said Fisher as he closed his remarks.

Kathleen Reynolds would also join with others at the podium to compliment Hernstadt and chastise councilors for their unwillingness to work with the former city manager.

It would be David Rice, well known city activist, Chairman of the City’s Big Flag Ad-Hoc Committee and longtime resident that would come forward in very a very somber tone to reflect on the events surrounding Hernstadt and speak to his conversations with one of the newly elected councilors over coffee during the election. “When I asked a direct question regarding the city manager and some disconcerting rumors I had heard he told me he could work with anyone. Well, you don’t get rid of someone within a couple of weeks,” said Rice.

Rice went on to relate an experience where he was in the presence of another successful candidate who was speaking about the city manager during the election. “This individual stated one of the first things they wanted to do was get rid of the manager and possibly the Chief of Police,” said Rice.

“From being a college football coach and athletic director I’ve learned from those experiences about fair play. I find this unsettling in the areas of fair play. Unfortunately I am going to resign as Chairman of the Big Flag Committee.  I cannot work with those I do not trust. I do not trust the city council and the truth is all that matters to me,” said Rice.

Hernstadt did have his detractors which came forward such as John Arceri who resides at the Esplanade and spoke of his displeasure with how Hernstadt had handled the issues concerning the construction of the new Smokehouse Bay Bridge and the impact on their development.  He would also question Hernstadt’s involvement in the Small Brothers proposal to build a hotel at the corner of Park Avenue and Elkcam Circle.

Tony Jessen, a property owner on Dorando Court would come forward to complain about Hernstadt’s inaction against a local plumbing contractor who had done work at her residence prior to Hernstadt’s arrival as city manager.  She has made frequent appearances before council over the last several years seeking redress.

After the somewhat contentious public comment surrounding the Hernstadt departure, council would turn their attention to the formal separation agreement which would prove to be a difficult task and in the end would fail to gain the support necessary for passage.

It would seem council would stumble over relatively minor issues concerning the final document and would now have the entire issue referred back to the city attorney, who would work with Vice Chairman Jared Grifoni to have a suitable document brought back before council for ratification.

Hernstadt had earlier signed off on the agreement as presented to council on Tuesday evening which would have amounted to a total of $115,946.57. That payout would not have been necessary had council chosen to let Hernstadt work out his time until July 7th of this year, instead they chose to accept his resignation immediately.

It is unclear when that document will be brought back before council for approval or whether it will have to be approved first by Mr. Hernstadt.

One response to “City Council Update”