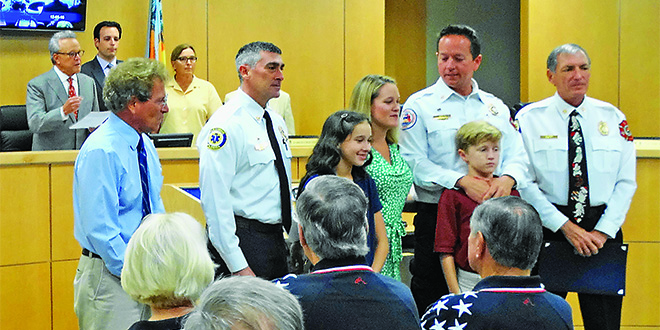 The Marco Island City Council met on the evening of December 5, and for the second straight time had to extend its adjournment to beyond the normal 9:30 PM agreed upon adjournment time due to extended discussions on issues.

After working though some procedural items and an initial request by Councilwoman Roman to have the appointment of Frank Mulligan removed from the agenda, council would move onto the portion of their agenda wherein individuals are recognized for service and presentations are made.

Former councilor Amadeo Petricca was presented with a proclamation recognizing his service for the last four years as a city councilor. Petricca thanked his wife for her support during his service to the citizens of Marco. A similar award was presented to former board chairman Bob Brown, for his time as chairman during the last twelve months by new Chairman Larry Honig.

The Big Flag Committee turned over a check for $8,500, which was a gift from a former member of the committee, Bonnie Garrett, to commemorate her recent birthday. Ms. Garrett has since moved from the island, but is still in touch 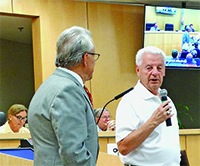 Amadeo Petricca thanks his wife for hersupport during his stay on council.

with the committee. Those monies will be placed into a fund that the city manages to help defer any costs associated with the maintenance of the flag erected a few years ago at the foot of the Jolley Bridge.

Chairman of the committee, David Rice also presented to the city a new flag to fly in honor of longtime resident and committee member Dick Shanahan in honor of his recent passing.

The council also recognized the 25-year anniversary of Battalion Chief Chris Crossan’s service to the citizens of Marco Island. Crossan grew up on the island and was presented with a proclamation from Council Chairman Larry Honig.

The long awaited report from Fitch & Associates as to the options available to the city regarding the ongoing discussions about emergency medical services and transport on the island was the focus of a presentation by Bruce Moeller, Ph.D. who represented the consultants.

Both Moeller and Fitch have a wide range of experience helping communities provide better and more efficient delivery systems for EMS Services and the issues surrounding COPCN (Certificate of Public Convenience and Necessity) acquisition.

Moeller himself has extensive experience 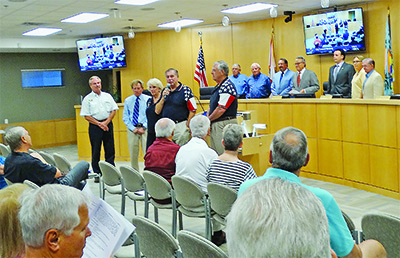 The Big Flag Committee makes a presentation to council.

in the State of Florida and has worked at various levels of municipal and county government and now serves as a senior consultant for Fitch.

Moeller led council through an in-depth discussion of his report and an explanation of his findings. He strongly recommended in his report that the city move forward to obtain its own COPCN in order to be prepared should a time come that the county exited the EMS business and turns it over to a separate independent fire district for management.

“This would give the city options as they moved forward. This would allow you to be better prepared in the future,” said Moeller.

Another of his key recommendations revolved around building on what the county system presently has in place today, while augmenting that service with a second city-owned EMS unit, staffed by city personnel on a year round basis for emergency transport.

Funding for that would come in part from collected fees from the emergency transport being done within the community by the city owned asset.

Moeller also cited some interesting statistics during his presentation, which showed Marco accounted for 5% of the county 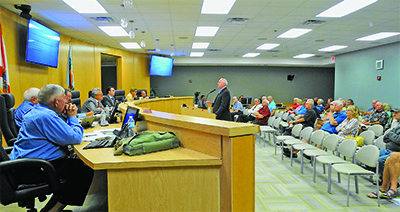 Council focuses on the presentation by Bruce Moeller, Ph.D. on the COPCN.

population served. The city also accounts for 5% of the total calls by the county system, while accounting for 10.6% of the income derived by the county for those transport services.

Council made no decisions on Monday evening, but will discuss the matter further during January meetings to ascertain their next step in the complicated process.

Council went on to vote 7-0 to confirm Frank Mulligan to a seat on the board, which will begin in February, having satisfied Councilor Roman’s procedural questions from earlier in the evening.

Councilman Victor Rios attempted to shut down any further discussions by the Planning Board on the work being done reviewing the ongoing LDC (Land Development Code) revision discussions. He described their review as a “Lame Duck Process,” and was joined by Councilor Reed in making a motion to defer any of the board’s discussions until after new appointees are made.

He also went on to criticize the consultant’s report and suggest that the process begin anew.

That drew a fairly strong response from both Councilors Batte and Brown, who described Rio’s actions as “insulting” to the board. The Rios/Reed motion failed by a 5-2 motion.