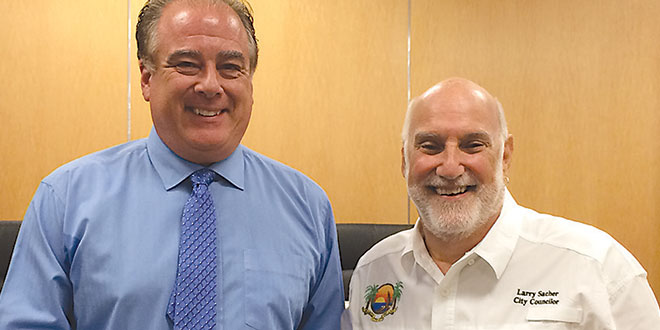 Not only was she recognized for serving the community for the last 36 years as the president of the Marco Island Taxpayers Association (MITA) through a proclamation and key to the city, but Council Chairman Larry Sacher also announced to the audience that he had formally submitted the application to name the city’s Community Room after Dr. Biles and her late husband, Bedford.

“I formally submitted the paperwork to the Parks and Recreation Committee to rename (the community room) in honor of Dr. Biles and her late husband,” Sacher said during the proclamation ceremony. “As I was putting the paperwork together, I Googled Dr. Biles. We’d be here another hour if we read all of the things Dr. Biles has done not only for the city of Marco Island but for Collier County as well as some of the colleges in our area. She truly deserves this award.”

This was the second meeting in a row Sacher mentioned naming the room for the Bileses, and it is no small wonder. The couple — who was married for 64 years — first bought a vacation home on Marco Island in 1967 and moved to the island full time in 1989. Even as part-time residents, though, Dr. Biles was at the forefront of MITA and became the organization’s president in 1978. Her commitment to “research, investigate, analyze and report on important issues that impact budgets” and to “good honest government” is unparalleled on Marco Island.

In addition to serving on a number of community boards and committees, Dr. Biles also was a driving force behind fundraising efforts for Florida Gulf Coast University. She used her years of experience as a professor and administrator at Kent State University in Ohio to help elevate FGCU, serving two four-year terms on the FGCI Foundation Board and also being named a Foundation Fellow.

Dr. Biles was very appreciative and a bit overwhelmed by the outpouring of applause and admiration she received during the City Council Meeting. “I am not sure I can voice any words at all,” she said. “I am so thrilled. I don’t deserve all of this. It is just I love Marco Island. I love the city. I love the

people on Marco Island, and I love the taxpayers.”

Now that the Parks and Recreation Advisory Committee has the application to name the Community Room in honor of the Bileses, the review process will begin followed by a 45-day window for public comment and then final approval to be given by City Council. Notice of naming the facility will be posted on the city’s website and advertised in local media to open up citizen comment.

In other business, City Councilors:

Councilor Amadeo Petricca disagreed: “It is our business to manage the city not their businesses. The city is entitled to some compensation if (the businesses) want additional parking.”

Chairman Sacher summed up the

narrow council vote by saying, “We clearly don’t have enough space here. We want to put an end to something that has gone on forever. When this island was originally designed, they had no idea the kind of volume we would have here now.”

The signs will be removed “until further decisions can be made.”

It is an item city councilors agreed to look at as Hernstadt’s one-year anniversary with the city is approaching in February. Councilor Larry Honig did a quick study of comparable city manager salaries around the state and found that annual increases — 2.5 percent for merit and 1 percent for cost of living — are common.