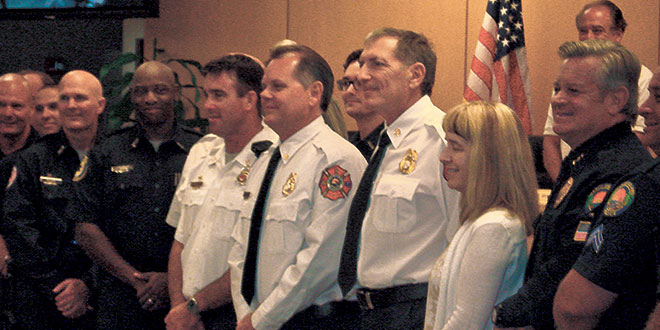 The City Council of Marco Island held a meeting on May 16. Councilor Larry Sacher was on an excused absence.

The meeting had an extraordinary start, as Marco Island Fire Chief Mike Murphy read a proclamation making May 16, 2016 “Chris Byrne Appreciation Day.” After 33 years of service to the community, Deputy Fire Chief Chris Byrne plans to retire at the end of the month. Chief Murphy said “It is a sad day for us that he has to leave. He does have to leave, because it is a pension requirement.” He went on to say “His dedication is 24/7.” Murphy told the story of how Byrne, on a day off in March, was the first to arrive at the scene of the tragic drowning of an 18-month-old, and heroically attempted to save the toddler’s life. Murphy recounted several other incidents in which Byrne saved lives of Marco Islanders and visitors. Once Byrne took center stage he jokingly said “I’m way out of my wheel house right now!” and thanked the community of Marco Island for giving him a job 33 years ago. Living his entire adult life on Marco Island, this is where Byrne met his wife and raised his family. The council took a break to cut a celebratory cake, and Chief Murphy invited the public to Byrne’s retirement party on May 27 at Rose Auditorium from 1 to 4 PM.

Florida House Representative Kathleen Passidomo addressed the council and audience with news from the state as it applies to Marco Island. The state has granted $250,000 for a new Marco Island Fire Marine Station. The original request was for $2,000,000 that the state was unable to provide, but Passidomo urged Marco Island to “keep at it.” A bill was filed through the House regarding the requirement of a COPCN for municipalities that want local control of their EMS transport. It was determined that at this time, the law impacts mainly Collier and Lee Counties, 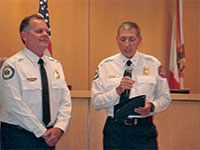 should be considered a local bill, and thus did not make it to the Senate floor. Passidomo stressed that if Marco Island wants independence through a COPCN, she will be a champion for a “local” bill.

Councilor Amadeo Petricca shared some pictures from Sand Dollar Island. According to Petricca there are numerous boats anchored there with visitors camping out, using propane tanks, and setting bonfires; all of which are strictly prohibited. Marco Island Police Chief Al Schettino stated that his department attempts to augment the Collier County Sheriff and patrol the area, but it is sometimes difficult. Although enforcement seems to fall on the city, Chief Schettino feels that Collier County should be more active in their enforcement.

Tami Scott, Zoning Administrator with the Growth Management Department said that 97 letters have been distributed to restaurants regarding the Commercial Land Use Zoning Certificate (CLUTZ). Approximately 11 restaurants have submitted applications for new zoning certificates. City Manager Roger Hernstadt cautioned that the city cast a wide net to capture all restaurants, and the city has already received at least one response from a restaurant that is “take-out only” and does not fall under all of the zoning requirements.

Mike Barbush of the Goodland Civic Association spoke from the audience stressing the urgent need for restoration of Goodland Road. The type and cost of the road repair has been the center of an ongoing discussion between Collier County and the City of Marco Island. Councilor Larry Honig expressed concern with regard to hurricane season rapidly approaching. He said, “We need a resolution,” indicating the best solution is for the county to take control and responsibility of the road.

A resolution for the Site Improvement Plan (SIP) of the Island Plaza at 664 Bald Eagle Drive passed unanimously. Additional public parking for the plaza will be added, not as a requirement of the SIP, but by the developer in the best interests of the plaza and community.

resolution was passed for the purchase of reverse osmosis membranes for the South Water Treatment Plant, not to exceed $151, 440. Although the resolution passed unanimously, Councilor Ken Honecker voted a reluctant yes, stating, “If we don’t, the system will collapse at some point.” City Manager Hernstadt warned that if the city does not maintain the water production plants, Marco Island could end up with water rationing or buying water from the county. He said, “ If we don’t want to maintain these plants, we should have decided that before we originally invested the money in rebuilding them.”

A resolution passed allowing for a traffic signal to be designed for the intersection of Saturn Court and North Collier Boulevard. Several residents of the area disputed the findings and observations of Trebilock Consulting Solutions, PA. Trebilock observed vehicular traffic over the course of several weeks, and based on the field observations the total pedestrian traffic at all three intersections did not justify a signal. However, the vehicle counts at Saturn Court did. In the end, the resolution passed 5 to 1, with Chairman Bob Brown reluctantly voting yes, and Councilor Victor Rios voting no.

Councilor Petricca presented white papers for the council’s review regarding Veteran’s Community Park. Proposed plans include maintaining green space and the Farmer’s Market, a permanent band shell, and restrooms. Councilor Petricca suggested moving forward with proposed plans for the park, using a pay-as-you-go plan to assemble the funds for the project. Councilor Joe Batte stated, “White papers are supposed to put items on the agenda for future discussion.” Councilor Honecker felt that it would be cheaper to finance it than to assemble the funds over years. Councilor Honig added, “The money is daunting,” suggesting that the discussion is still a long way away and should not be scheduled during a budget workshop meeting because of the need for more input. No formal council action was taken.

For more information including the agenda and video of this meeting, please visit www.cityofmarcoisland.com.