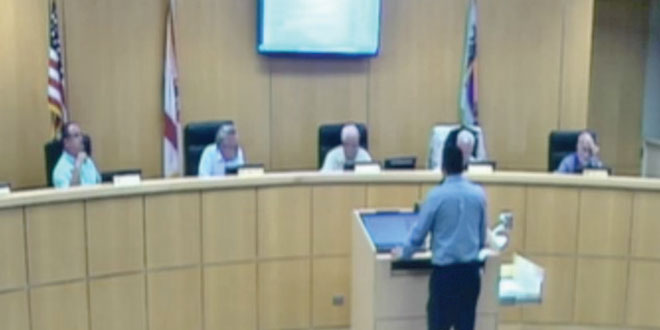 To see the proposed 2017 Fiscal Year budget in itsentirety, please visit www.cityofmarcoisland.com. The video of this workshop is also available there. Submitted

The word “workshop” brings forth an image of laborers as they collectively hammer and chisel away, piece by piece, with the goal of constructing something that will be functional and structurally sound. And so it was on July 8 at the Marco Island City Council Budget Workshop as the council forged their way, honing and refining several items.

The proposed draft budget for Fiscal Year 2017 was presented to the council with components that included the General Fund (operations that are supported by property taxes), Enterprise Funds (Building Services, Recreation and Racquet Club) and the Utility Funds (Water and Sewer). In a letter addressed to the council members, City Manager Roger Hernstadt cited the imminent closure of Marco Island’s road agreement with Collier County. He stated “The budget assumes forgoing the $1 million revenue for FY2016 and $1 million for FY2017 for use within the City and which creates a challenging shortfall to be filled. Fortunately, by using expenditure control strategies and some unanticipated revenues, we were able to mitigate some of the impact.” He praised the City staff for their frugality in helping to reduce the money needed for the budget. He said “Staff really shouldered the burden” in keeping taxes the same as last year for homestead properties, at a rate of $1,000 for municipal operation taxes for a property valued at $500,000.

Guillermo “Gil” Polanco, CPA, Finance Director for the City stated that all departments were below budget in their spending for the second year in a row. He presented the cuts made by each department and all the items in the “add-on” list, giving details on proposed changes and additional requests to fulfill the needs of each department.

The council unanimously approved a 1.5% increase from the current 5% for the 401(a) contributions the City makes for its non-union employees. Hernstadt stated that the contribution rate is currently low if compared with the County and the City of Naples. Raising the rate will allow the City of Marco Island to be competitive in maintaining quality employees.

The Fire Rescue Department requested an additional $125,000 in funding, as there is uncertainty of the future of Marco Island’s interlocal agreement with Collier County in the provision of EMS services. At present, Marco Island and other Collier municipalities do not have “home rule” of EMS due to a Florida statute. Fire Chief Murphy and City Manager Hernstadt both stated that the additional money would substantiate the City’s request for a COPCN, a certificate that if obtained, would allow for home rule. Murphy informed the council that the study being conducted by the consulting firm, Fitch & Associates, is being finalized with a report to be available in 3 to 4 weeks. Councilor Honig expressed his concern, saying, “A step has been skipped,” adding that it could send the wrong message to the county. However, Councilor Sacher noted that this is a memo item with no definite commitment, but with potential instead. Councilor Honecker demonstrated his support, saying “It is prudent to set aside the money for ambulance service on Marco Island just in case we need it.” In reference to what might happen to EMS on Marco Island with the possible creation of an independent district, Hernstadt said, “The real point is, we just don’t know.” In the end, council approved the item 5-2 with Councilors Honig and Rios dissenting.

The Parks and Recreation Advisory Committee (PRAC) requested $250,000 for “architectural services” at Veteran’s Community Park. Plans include the construction of a band shell and permanent restrooms. Councilor Rios adamantly objected to the dollar amount, and Councilor Honig objected to the amount plus the language involved. Honig felt that the term “architectural services” should be limited to an “update to the park’s master plan with a site development plan.” He also felt the amount should be reduced to $150,000. When a vote was taken, the item passed in the full amount of $250,000, but with the change in description as suggested by Councilor Honig.

City Manager Hernstadt also advocated spending $84,000 to address the deteriorating Racquet Center and $16,000 for the Mackle bocce courts, and his recommendations were supported by the council.

The City of Marco Island is currently undertaking water and sewer projects for Marco Shores, the off island community on Mainsail Drive. However, the amount of utility fees that Marco Shores residents are paying does not cover the cost of these projects. City Manager Hernstadt proposed a $58,000 assessment analysis to compute the cost for the residents of Marco Shores, citing that the assessment revenue was not included in the capital budget and could be a source of revenue if the City Council is not happy with the current level of funding in the water and sewer department. However, Councilors Honecker, Honig, Sacher and Brown were opposed to this idea. Chairman Brown stated that he might be interested in assessing the issue proportionately, but did not want the residents of Marco Shores to assume 100% of the cost. Councilor Honig felt the proposal was unfair, as the residents of Marco Shores have no vote for the council that would be imposing such an assessment. Councilor Sacher laughingly commented that it was indeed a rare occasion for Councilors Honecker, Honig and himself to be in agreement on an issue, adding that this council along with previous councils could have exercised a 25% surcharge on rates for Marco Shores, but had “blown this opportunity every time.” The vote concluded with Councilors Honecker, Honig, Sacher and Brown opposing the assessment, and the minority of Batte, Petricca and Rios being in favor of it.

To see the proposed 2017 Fiscal Year budget in its entirety, please visit www.cityofmarcoisland.com. The video of this workshop is also available there.