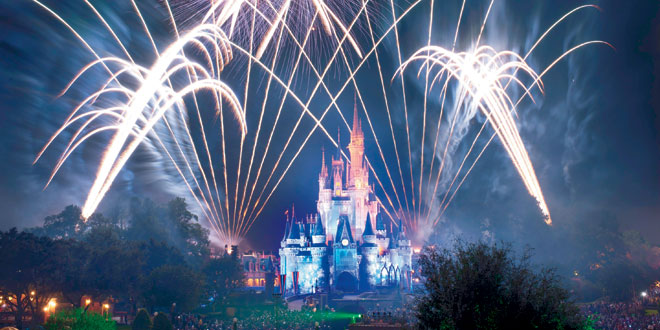 hristmastime is magical for the child in all of us at Walt Disney World in Orlando. The crowds can be massive, but visiting early in the season helps avoid the mayhem and many hotels within the resort have special offers the first part of December.

First, a few statistics about the holiday decorations at Disney World. It takes 150 semi trailer truckloads of decorations to adorn the theme parks, resorts, and Downtown Disney. This includes 1300 decorated trees, 15 miles of garland, 1314 wreaths, 300,000 yards of ribbon and bows, and 8.5 million lights. Phew!

The Magic Kingdom, from the second week in November until December 21, offers special purchase tickets to Mickey’s Very Merry Christmas Party. At 7:00PM, the park closes to all but those holding tickets and there is festive entertainment, meet and greet opportunities, cookies and hot chocolate, snow falling on Main Street, a Once Upon a Christmastime Parade, and fireworks. The special night lighting of the Cinderella Castle during the holidays is truly like something out of a fairy tale. One year, we were serendipitously there for the taping of the annual TV viewing of the Christmas Parade hosted that year by Kelly Ripa and Regis Philbin. Because of the taping, the parade was offered to all attendees during the day; incredibly, the park wasn’t too crowded.

Animal Kingdom park features a 3:45PM parade with a Christmas theme, as well as a holiday sing-along during the parade. 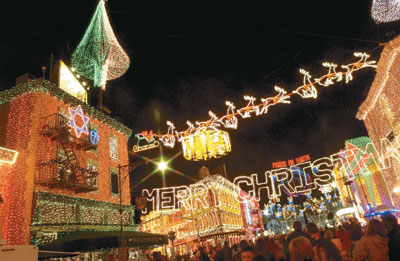 the Osborne Family Spectacle of Dancing Lights which opens early November. Featuring more than 10 miles equivalent of 5 million plus twinkling lights synchronized to seasonal music, animated displays and snow flurries, it is a dramatic spectacle. The history of this display is interesting; it began as one family’s Christmas decorations in Arkansas. Jennings Osborne’s display became more elaborate each year until his neighbors took him to court over what they deemed a nuisance due to all the traffic it attracted. The Arkansas Supreme Court ordered Mr. Osborne to “cease and desist” the display. Arkansas’ loss became Disney’s gain as it offered to become the permanent home of the light show. Disney has added to the display and it is a sight that has to be seen to be believed. If you visit, try to find the hidden Mickeys in the lights; there are more than 40 of them. It is said that when the display moved from Arkansas to Orlando, one of Osborne’s purple lighted black Halloween cat was accidentally included; every year it is placed somewhere among all the other lights.

Epcot offers the most for adults during the Christmas season. The various countries that encompass the World Showcase feature their unique Yule decorations as well as storytellers who recount the holiday traditions from each country. Meet La Befana, the witchlike character who delivers gifts in Italy, St. Nicholas in Germany, Pére Noël in France, Julenissen in Norway. At the American Adventure, learn about Kwanzaa and 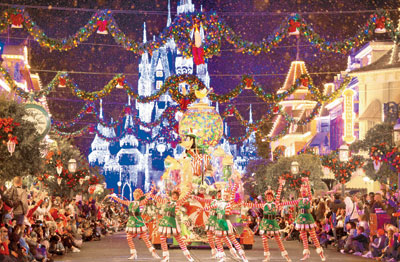 Mickey’s Once Upon a Christmas time parade complete with falling snow is featured during the special after hours Very Merry Christmas Party during the holiday season.

Hanukkah or Ramadan and Ashura at the Morocco Pavilion. Chinese and Japanese New Years are explored at their respective pavilions.

If you collect Christmas ornaments, you can purchase a keepsake from one of the countries. I always like buying an Advent Calendar at Germany’s shop; these countdown to Christmas calendars were a childhood holiday tradition for my family. Or purchase an edible reminder of a place you have visited or gift for someone; maple syrup or candy from Canada, Maxim de Paris chocolates from France, Italian chocolates, Swedish preserves, English tea.

The Candlelight Processional is a four decade old tradition at Epcot. Held outdoors at the America Gardens Theatre, it features a celebrity reader recounting the Christmas story, along with guest choirs, a 50 piece orchestra, and, of course, a candlelight procession with more than 400 performers. It opens the Friday after Thanksgiving and usually runs until December 30. Celebrities this year included Geena Davis, Neil Patrick Harris, Whoopi Goldberg, Gary Sinise, and Amy Grant.

To best appreciate this event, purchase of a dining package at one of the many featured Epcot restaurants provides reserved seating at the reading as well as a special area for viewing the later fireworks, IllumiNations: Reflection of Earth. The reserved seating is first come, first served, so it is a good idea to arrive early and make sure you are in the correct line; usually the reserved seating is on the left side; general admission on the right.

If you don’t purchase one of the 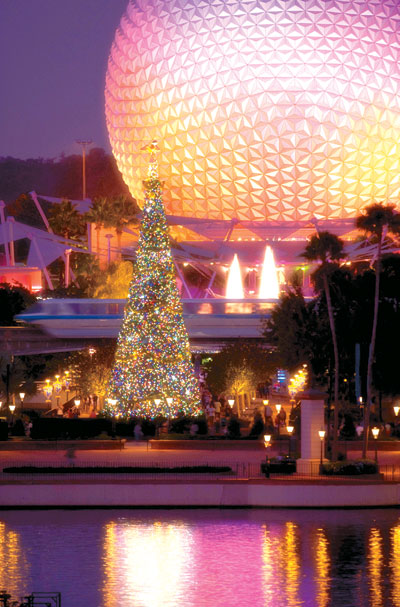 Epcot celebrates the holidays with an annual Holidays Around the World featuring the traditions of many different countries.

meal packages, seating is on a first come, first served basis and people usually start lining up at least 45 minutes before the show. There are 3 shows a night.

Each resort owned by Disney offers unique decorations such as the all chocolate display and live tropical Santa at the Swan Resort, the five story tree and life sized gingerbread house at the Grand Floridian, or the gingerbread carousel at the Beach Club. Even if you are not staying at one of the resorts, they all can be visited by the public. You can use Disney transportation from any of the theme parks to any of the resorts. If driving, free limited time parking passes are available at the gates of the resorts.

During the holiday season, Downtown Disney features the Festival of the Seasons with holiday decorations, displays and entertainment throughout. In case you missed purchasing your holiday keepsake while at one of the parks, holiday gifts are available year round at Disney’s Days of Christmas located there.

No matter what your age, Disney World holds a special kind of magic during the holidays.